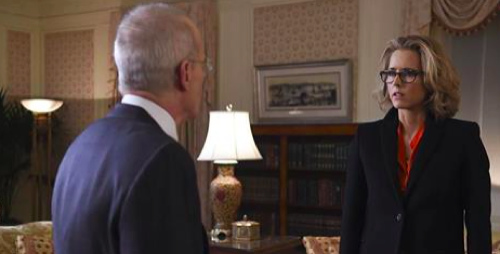 Tonight on CBS Madam Secretary airs with an all new Sunday December 13, season 2 fall finale called, “The Greater Good” and we have your weekly recap below. On tonight’s episode, peace talks are scheduled in hopes of ending the escalated conflict with Russia.

Traveling to Switzerland, Elizabeth (Tea Leoni) and President Dalton (Keith Carradine) meet with Maria Ostrov, (Angela Gots) fully prepared to use a reputation-ruining secret they have on her to yield the desired results. Meanwhile, Dmitri (Chris Petrovski) requests to be released from his duties as a spy.

Madam Secretary  is an American political drama television series created by Barbara Hall and executive produced by Lori McCreary and Morgan Freeman. It stars Téa Leoni as Elizabeth Adams McCord, a former CIA analyst and college professor who is promoted to United States Secretary of State.

On the last episode, Elizabeth prepared to deliver a speech to the United Nations that blamed Russia for the attack on Air Force One, but then Henry shared information that made her seriously reconsider this theory. Did you watch the last episode? If you missed it, we have a full and detailed recap right here for you.

On tonight’s episode as per the CBS synopsis, “after they uncover a secret that could ruin Maria Ostrov’s (Angela Gots)reputation, Elizabeth and President Dalton head to Switzerland to meet with her and use the information as leverage to find a peaceful solution to the escalated conflict with Russia. Also, Dmitri requests to be released from his duties as a spy.”

Tonight’s episode of ‘Madam Secretary’ kicks off with a flashback to Russia – Maria Ostrov is riding through the streets in a convoy. The people are lined up outside to catch a glimpse of her as she was out the window of the car. Her husband is riding in the car with her, he doesn’t look so good.

He grumbles that he needs more pills. Later that night Maria injects a syringe in to her husband and kills him after she calls him a piece of “worthless trash.” It’s all a dream – Maria is woke up by one of her men, she is needed for an urgent security meeting.

In the United States, President Dalton, Liz, and Jackson are all watching a live feed of the American army shooting down Russian planes. Elizabeth obviously is uneasy – she doesn’t think the President realizes the severity of what they just did. President Dalton snarks that all they are doing is “enforcing a no fly zone.”

Maria Ostrov meets with her security council and learns that they lost 11 jets to the US fighter pilots. She says that since they can’t beat America in the sky – they are going to have to beat them on land. She orders the general to send his troops in to Mariupol, and shouts that it is time to “make their enemy bleed.”

Henry receives a phone call from Dmitri, he tells him in code that Russia will be attacking Marupoi. Dmitri begs Henry to get him out of Russia – Henry reassures him that he is working on it. Henry fills his handler in on Mariupol, and he reports to Dalton.

After Dalton is briefed on Mariupol – Elizabeth begs the President to consider burying the hatchet before this gets out of control. President Dalton won’t listen, he says that there will be “no talk of a cease fire.”

Elizabeth heads back to her office and sits down with her team – she wants to learn everything there is to know about Maria Ostrov. Apparently she was in teen beauty pageants and came from a poor family – she married up when she met the President. But, she had a ton of plastic surgery and money hidden in Swiss bank accounts. Elizabeth’s team thinks she may have had a sugar daddy.

Elizabeth heads home to decorate the Christmas tree with the kids. When she arrives, Henry is on his way out – he says that Russia attacked Mariupol and the US and Soviet Union pushed them back out. Now, Henry is rushing off to try and figure out how to get Dmitri out of Russia because his cover is blown.

In Russia, Maria is holding a meeting with her Security Council – she is not hapy about the battle in Mariupol, she knows that there is a traitor among them. It is obvious that someone tipped off the Americans and Ukraines. Dmitri is certain he is caught, but then Maria has another man dragged out of the room – she thinks he is the traitor.

Meanwhile, back in the US Henry is flipping out – he wants to know why the handler still has not gotten Dmitri out of Russia. The handler says that there is nothing that she can do. Henry is furious, he says that he will go in to Russia himself and get Dmitri.

Jay is working hard trying to get information on Maria Ostrov’s Swiss bank accounts – he meets with a Swiss diplomat and offers him a deal. Jay says that next year they will have the Olympics in Switzerland, but the diplomat isn’t budging.

Jay snaps and screams at him that there is no way the Swiss can stay neutral in World War III. They are going to wind up getting taken out this time around because the bombs are bigger and stronger than they were 60 years ago.

Elizabeth arrives at work and Daisy has bad news – Maria Ostrov held a press conference and ousted the United States. She reveals that the United States and Ukraine framed Russia for hacking Air Force One and she announces that President Dalton is a “war mongrel.” Elizabeth rushes to meet with President Dalton – who is freaking out for good reason.

Elizabeth tells the President that right now they look like the aggressor, they need to sit down for peace talks and try to work this out before it gets any worse. President Dalton finally agrees to a peace summit and Elizabeth leaves to set it up.

Elizabeth gets an emergency text from Jay – he found something interesting in Maria Ostrov’s financial records. Elizabeth heads back to her office and Matt and Jay brief her. Apparently, they found proof that Maria Ostrov murdered her husband.

Elizabeth says that isn’t true – the President had an aneurism. There are wire transfers two months ago, apparently Maria paid him $1 Million right before he died to give him a tummy tuck. The day after the President died, Maria transferred another $1 Million to her doctor McClusky’s account.

Elizabeth says to bring McClusky in – but that is not possible, because he was suspiciously murdered a week ago. Elizabeth’s team also found proof that McClusky wrote the prescriptions that killed President Ostrov. And, no one is left alive to prove it. Elizabeth totally believes it, but the problem is that it is all circumstantial. She wants real evidence – she tells Jay that he needs to get her a copy of President Pavlo’s autopsy report.

Elizabeth and President Dalton head to the peace talks with the other nations – they hash out an agreement between the Soviet Union and Russia. Maria Ostrov agrees to reinstate Europe’s oil supply. Right before they are about to sign the agreement, Maria wants one more thing.

She requests that President Dalton publicly apologizes for attacking Moscow. President Dalton kicks everyone out of the room, he and Elizabeth inform Maria that they have proof that she killed her husband – and if she doesn’t sign the peace treaty, they will go public.

Maria caves and says that she will sign the agreement – but only if they tell her the name of the spy that they have in her army. Elizabeth laughs that is not an option. They aren’t giving her any names or an apology.

President Dalton seriously considers giving up Dmitri’s name – Elizabeth can’t believe that he would rather have a man murdered than apologize to Maria. Dalton says that he has to put National Security first, and she needs to stop worrying about her husband Henry.

Meanwhile, Henry and Jane Fellows are on the way to pick up Dmitri from the safe point. As they are about to pick him up an unmarked black car drives in front of them and grabs Dmitri. Jane screams at her driver to “abort mission.”

As they are driving off, Henry is panicking, he wants to know what is happening to Dmitri and who the men are that just grabbed him off the street right before their eyes. Henry heads back to the hotel where Elizabeth is waiting for him – he wants Liz to make some calls so that they can find Henry, he thinks it is all a big misunderstanding.

Elizabeth admits that Dmitri was part of the negotiation and Dalton gave him up to Maria. Henry is furious that Elizabeth didn’t talk Dalton out of it and he storms off.

Elizabeth and Dalton are leaving the building where the peace conference was held. Unbeknownst to them, there is a man in army khakis hiding behind a wall with a grenade launcher. One of the cars explodes…