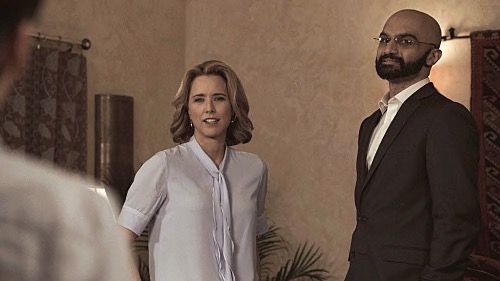 Tonight on CBS Madam Secretary airs with an all new Sunday March 15, season 1 episode 16 called, “Tamerlane” and we have your weekly recap below. On tonight’s episode, Elizabeth secretly travels to Iran in an attempt to thwart a coup that could impact President Dalton’s administration. She also updates her staff on the investigation into Marsh’s death.

On the last episode, Elizabeth traveled to Turkey to mend political relations after the Turkish government released a video that could be damaging to the CIA. Back at home, Jason faces expulsion as punishment for punching a bully at school. Did you watch the last episode? If you missed it, we have a full and detailed recap right here for you.

On tonight’s episode as per the CBS synopsis, “Elizabeth secretly travels to Iran in an attempt to prevent a coup that could impact President Dalton’s administration. Also, she brings her staff up to speed on the investigation into Marsh’s death.”

Tonight’s episode of Madam Secretary kicks off with Director Munsey’s house being searched by the FBI – he will be cut off from all ties to the outside world. Elizabeth and the President meet with the Attorney General and she briefs them on Munsey, it is going to look like he is still free and has not tipped off the United States on the coup that he staged in Iran. Meanwhile, they have 72 hours to figure out how to stop the coup. Elizabeth decides she needs to find the leader in Iran in order to stop the coup.

Elizabeth meets with Isabelle and briefs her on Secretary Marsh being murdered and Munsey co-conspiring with traitors in Iran. Then Elizabeth meets with her team – Daisy, Matt, and Jay. She explains to them that Marsh’s plane crash was staged – and Munsey started a coup in Iran. Elizabeth shares four photos of leaders in Iran with her team that she thinks may have been working with Munsey. They get to work tracking down the Iranians, and trying to figure out if they had any previous connections with Marsh and Munsey.

Elizabeth’s team gets to work building a crazy diagram of Marsh, Munsey, and the Iranian leaders travels over the last year. They realize that last April Marsh, Munsey, and an Iranian named Jafar Alinijhad were all in Jamaica on the same weekend – so they have found their coup leader.

Meanwhile at home Elizabeth, Henry, and the kids are preparing for her daughter’s 16th birthday party. Nadine calls Elizabeth and brief her on Jafar – she rushes to the President’s office and shares the information with him and Jackson. They do some research on Jafar and realize that his brother is still a leader in the Revolutionary Army in Iran. President Conrad tells Elizabeth to meet with Jafar “off the books” and see what he knows. Elizabeth is thrown for a loop, she doesn’t understand why Conrad wants her to sit down with him, she asks him if he is thinking about supporting the coup instead of stopping it.

Jackson and Elizabeth head to Canada to meet with Jafar, he is living there in exile form Iran. Elizabeth tells Jafar that they know about the coup – he thinks they are there to “back his vision for Iran.” He envisions: fair trade for the West, free elections, restructuring of the economy, and moderation across the board. He vows to Elizabeth that the people of Iran “Will rally behind him.” Jafar insists that he had nothing to do with Marsh’s death though. After their meeting Jackson tells Elizabeth that he is going to recommend to the President that the “US get behind the coup.” Elizabeth warns him that he might want to reconsider because she noticed the greying of Jafar’s pupils and spider veins around his temples – she says “Iran’s great savior is dying.”

Elizabeth’s tea heads to the bars for some drinks after work. They rant about how corrupt Marsh was – they think the entire administration is going to come crumbling down when the scandal goes public, and they are going to lose their jobs. Nadine confesses that she and Marsh were having an affair for six years.

Elizabeth and Jackson head back to the US and meet with the President – they did some research and Elizabeth was right, Jafar is dying from brain cancer and he only has 2 months left. They can’t back the coup even if they wanted to because once the leader Jafar dies, the government in Iran will completely crumble. They have to stop the coup. Elizabeth decides to “take another crack at Munsey” and pays him a visit. He refuses to give her any information on the coup and kicks her out because he has to “get back to a Real Housewives marathon.”

Elizabeth heads home and fills Henry in on what is happening at work, she announces that she is going to Iran. Henry is not having it – it’s too dangerous for her to travel to Iran in the middle of a coup. Elizabeth reassures him that it will be a “secret mission” and the radicals will not even know that she is in the country. She reminds him that there are millions of lives at stake and reassures him that she will be okay. Elizabeth jokes that if anything does happen to her, then he should wait a year before he starts dating again.

The next morning Elizabeth tells her daughter Ali that she is going to miss her birthday and they can celebrate her Sweet 16 when she gets home – she says goodbye to her husband and heads off to Iran. Meanwhile, Munsey manages to sneak a phone call in while be watched by FBI agents, he calls Iran and gives them the greenlight and go ahead with the coup. Jackson calls Elizabeth in Iran and warns her that the coup may be happening sooner than they thought.

Elizabeth arrives at Sahad’s home where he lives with his wife and kids. She sits down with him and warns him that there is a coup in Iran, she confesses that two high-profile politicians in America coordinated the coup. Elizabeth gives Sahad the coordinates of the phone call that Munsey made to show good faith, and tells him she thinks that is the coups headquarters. Elizabeth strongly advises Sahad to take the information to Iran’s president.

Elizabeth calls home and wishes her daughter happy birthday and reassures Henry that she is safe. After she hangs up there is an explosion at Sahad’s house and it is riddles with bullets. Her security guard is shot and killed – and Elizabeth scrambles to the floor for cover. President Conrad and Elizabeth’s team learn of the coup and explosion – and they can’t make contact with Elizabeth.

Henry receives a phone call at home from Nadine, letting him know that the coup is underway and they lost contact with Elizabeth. Sahad’s house went up in flames and they have no idea if Elizabeth made it out – the Iranians have jammed all contact from outside of the country, the power grid is down. Henry rushes to the President’s office and threatens him – he demands that the President get his wife home in one piece. Jackson tries to reason with Henry and reminds him that Elizabeth knew the dangers and she signed off on the mission.

Henry heads home and his daughter Ali demands to know where their mom is – Stevie tells their dad to just be honest with Ali and tell her where their mom is. Henry admits that she is in Iran trying to stop the coup.

Meanwhile in Iran Elizabeth is alive, she is in some sort of fall out shelter or basement with Iranian leaders hiding from the coup – she pleads with the man in charge to get her some sort of phone or way to contact the US and tell them that she is alive. He tells her that there is no way to make outside contact and notices that she is bleeding, Elizabeth insists that she is okay. President Sharaz meets with Elizabeth in the shelter – she tells him that Sahad died in the explosion. President Sharaz says that they are successfully combatting the coup, thanks to the US’s warning.

Jackson gets a phone call and learns that Elizabeth is alive – he rushes to tell the President the news. The President tells Jackson to set up a press conference, they are going with complete honesty and not trying to stage another cover-up. Henry and the girls get a phone call at home learning that Elizabeth is alive and they celebrate. Nadine rushes to her team and gives them the good news and they all breathe a sigh of relief.