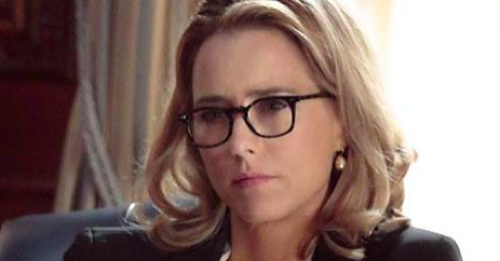 Tonight on CBS Madam Secretary airs with an all new Sunday March 8, season 1 episode 15 called, “The Ninth Circle” and we have your weekly recap below. On tonight’s episode, Elizabeth [Tea Leoni] travels to Turkey to mend political relations after the Turkish government releases a video that could be damaging to the CIA. Also, Jason is threatened with expulsion after punching a bully at school.

On the last episode, a special consultant was hired by Elizabeth after she was humiliated at a public budget hearing due to the fact that her staff failed to find the corruption that existed in her microloan program; at the same time, the investigation into Marsh’s death continued. Did you watch the last episode? If you missed it, we have a full and detailed recap right here for you.

On tonight’s episode as per the CBS synopsis, “Elizabeth travels to Turkey to mend political relations after the Turkish government releases a video that could be damaging to the CIA. Back at home, Jason faces expulsion as punishment for punching a bully at school.”

Tonight’s episode of Madam Secretary kicks off with Elizabeth home with Henry, she receives a phone call that Isabelle has been released from custody – she arrives on Elizabeth’s doorsteps and rats that she was accused of treason. Isabelle says that she doesn’t blame Elizabeth for suspecting she was the mole. They head to the kitchen and Elizabeth shows Isabelle the letter that Juliette left. “Whatever happens know this, I did it for my country – this is a righteous cause.” Isabelle is baffled why Juliette would kill one of their closest friends. Henry thinks that Juliette is working with someone, and there is more to come. Isabelle takes the file from Elizabeth on the raid in Turkey and says she is headed to breakfast.

At a press conference – the media demands to know why Boras’s body has been moved to a police barracks instead of released to his family. Stevie, Alison, and Jason are getting ready for school while the press conference is on. Jason rants about a kid in his school that posts things about his mom on Facebook – Stevie encourages Jason to unfriend Preston. Elizabeth rushes downstairs and says goodbye to the kids and rushes to work.

Elizabeth arrives at the office and Jackson is watching more footage from Turkey and the botched extraction – he orders Elizabeth to “stick to their story” when the press hounds her and deny any involvement in Turkey. Elizabeth meets with her team and Daisy tells her that the press was hounding her about Boras’s body. Nadine tells Elizabeth that Brett’s mom is downstairs and wants to know why she can’t have her son’s body. Elizabeth says to send her up to her office – Nadine warns her that is highly irregular and will raise more red flags, but Elizabeth meets with Brett’s mom anyway. Brett’s mom is suspicious – she had no idea why her son was even in Turkey and he didn’t tell her that he was leaving. She cries that her son’s death doesn’t make any sense, she leaves Elizabeth a photo of him to look at every day until his body is returned.

After her meeting, Elizabeth’s team bombards her. The Turkish government released the video footage of the CIA trying to extract the witness from Turkey that was botched and resulted in a shootout in the street, killing Brett. Daisy and Nadine demand to know what happened and why they didn’t know anything about it. Elzabeth rushes out to go meet with the president and snaps at them not to talk to the press about the Turkish video.

Elizabeth meets with the President and Jackson – Elizabeth volunteers to fly to Turkey and publicly apologize, they need to make amends with Turkey so they can get Brett’s body back and the media will relax. The President gives Elizabeth permission – and he orders her to do it “quietly.” He doesn’t even want her staff to know what is going on. He warns her that if apologizing doesn’t work then he is going to try Russell’s plan and “bring down the hammer.”

Elizabeth heads home to pack for Turkey and she rants to her husband about Jason being bullied at school by Preston. She thinks that she should call the school – but Henry tells her to let Jason try to work it out on his own first. Elizabeth collapses on the bed and whines to Henry about having to lie to Brett’s mom, she hates that part of her job and she blames herself for his death. Henry reminds her that there is no one to blame but Juliet.

At the office Daisy learns that Elizabeth cleared her schedule and is going out of town for a week. She demands that Nadine give her some info on Turkey before she goes to her press conference. Daisy can tell that they are lying, and she doesn’t like it. She wants to know what is really going on. Nadine reveals that she doesn’t even know what is really going on and tells Daisy to go out in front of the press and read the talking points that she gave her.

Brett Boras’s mom barges in to Elizabeth’s office screaming at her – she seen the Turkish video and she knows that he was in the CIA. Elizabeth admits that he was, but it wasn’t her place to tell him. Brett’s mom threatens to go to the media and tell them the truth – she is furious that the government is giving him the respect that he deserved because he died on a mission for them. Elizabeth invites Brett’s mom to come with her to Turkey to get his body – if it doesn’t work, then she gives her permission to go to the press.

Meanwhile at school, Preston is bullying Jason and calling his mom a liar just like CNN, they wind up in a brawl in the hallway and Preston has a broken nose. Henry calls Elizabeth to fill her in on what happened – and their son is suspended. Henry is going to meet with the dean tomorrow.

Elizabeth arrives in Turkey, Isabelle meets up with her – she has information from her contacts at the Turkish police. Apparently the police have a laptop that was in Samila’s bag when she was shot and killed in the street – they still don’t know what was on the computer though because all of the files were encrypted. There could be information in the files that would explain Morris’s death.
Elizabeth meets with the Turkish leader and tells him that she needs Samila’s laptop from the police station. He rants that their mission killed some innocent Turkish civilians. He reveals that Iranian leader Giovanni was in his office earlier and wants the laptop more than Elizabeth does – they offered an impressive fuel gift. Elizabeth offers to beat the Iranian offer with American gas – the Turkish leader says he will take the two offers to the President and see what he has to say. Afterwards Elizabeth and Brett’s mom head to the Turkish morgue so that she can see her son’s body.

Back in the US Daisy rants to Matt that she is tired of lying and being lied to. Matt shuts the door and says that a few months ago Elizabeth had him lie to Russell about Dubai, and he never understood why – now he thinks that it may be related to the incident in Turkey.

Elizabeth meets with Turkish President Sahid – he is furious with her and tells her that the US’s peace treaty with Turkey is over. Elizabeth is baffled when he accuses her of lying to him. Sahid says that they went through Samila’s apartment and possessions and she an American CIA agent – and she was planning a terrorist attack on Turkey. Elizabeth tries to explain that it can’t be possible but Sahid storms out and says that if the US wants war, then that is what they are going to get.

Back in the US, Daisy and Matt head out for drinks and she continues to rant about all of the secrets that are being kept at the office, Matt tells her that it is her job to “do her job and hope her boss isn’t strangling puppies at night.” Daisy runs in to Craig at the bar – he gives her some advice and tells her to write down everything she is told to lie about every day and hire a lawyer.

Elizabeth meets with the Turkish leaders and hashes out the gas deal for the laptop. They inform her that she can have Brett’s body if she apologizes publicly for what happened – but Iran is getting the laptop and the decision has been made. Sahid meets up with Elizabeth and slips her a flashdrive – he admits that he was wrong, and warns her that there are forces in both of their countries trying to create a war between them. He tells her that he wants to work with her to make sure that doesn’t happen.

Nadine briefs Elizabeth’s team and tells them that Brett’s body is on its way home – and the Turkish government is rescinding their accusations of CIA involvement. Daisy tells Nadine that she can’t spin that story, and she isn’t willing to. Nadine announces that if that is the case then they “have a problem.”

Elizabeth and Henry head to Jason’s school to meet with the Dean. While they are waiting Jason tells Elizabeth that he just punched Preston like Henry did a marine at a restaurant that was talking badly about Liz. They head in to the meeting and the Dean asks Jason to shake hands with Preston and apologize. Afterwards, the Dean says that Jason is expelled because his apology wasn’t sincere. Elizabeth rants that it is unfair and she is taking it up to the Board of Education. As they are leaving Jason reveals that he is happy he was expelled, and he wants to go back to regular school.

Elizabeth heads to the office and meets with Jackson and the President, they summon Andrew and tell him that they know he murdered Marsh and Peterson, and he had Samila killed because the CIA was getting too close to the truth. Andrew scoffs that nothing on that computer is admissible in court – he explains that he has been working secretly orchestrating an Iotolla coup in Iran. The coup is already in motion and there is nothing the President can do to stop it.