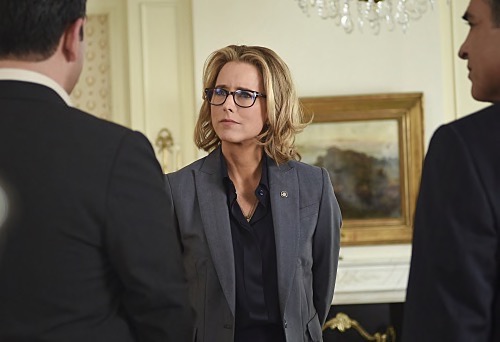 Tonight on CBS Madam Secretary airs with an all new Sunday April 26, season 1 episode 21 called, “The Kill List” and we have your weekly recap below. On tonight’s episode, Elizabeth [Tea Leoni] sees a therapist to deal with her PTSD; at the same time, she prepares for the president of Iran to sign a nuclear treaty; and works to foil a secret plot to assassinate the Iranian leader on U.S. soil. Meanwhile, the Secretary of State’s office need to address a massive outcry over Iran’s plan to stone to death a gay citizen.

On the last episode, Elizabeth found herself navigating a difficult political situation when a Russian nuclear submarine vanished in American waters; at the same time, Henry, coincidentally, was in Russia giving a lecture on fundamentalism. On the home front, Stevie broke up with her older boyfriend. Did you watch the last episode? If you missed it, we have a full and detailed recap right here for you.

On tonight’s episode as per the CBS synopsis, “as Elizabeth prepares for the arrival of Iranian President Shiraz to sign a nuclear treaty, she uncovers a top secret plot to assassinate him on United States soil. At the same time, she must deal with a massive protest by the Human Rights Campaign in response to Iran’s plans to stone a gay citizen to death. Also, Elizabeth sees a therapist (Marsha Mason)to deal with her PTSD. Marsha Mason guest stars as Elizabeth’s therapist, Dr. Kinsey Sherman. Hill Harper guest stars as Juliet’s husband, Aiden Humphrey.”

Tonight’s episode of Madam Secretary kicks off with Elizabeth in therapy – the therapist asks her about her old CIA friend who they have nicknamed “Jane.” Elizabeth doesn’t want to talk about it, she says that she feels overwhelming loss and Jane was considered her family and they have known each other for over 20 years. Elizabeth blames herself for not thinking Jane was capable of betraying her and her country, and hurting the people they cared about. Elizabeth chokes up and says that she can’t reconcile with the betrayal.

Humphrey is walking through a restaurant and CIA agents corner him, they take him in to an office and demand to know if he has talked to his wife. He insists he hasn’t spoke to her and their daughter’s birthday is tomorrow – he demands to know if his wife Juliette is okay or in trouble, but they wont give him any information.

Elizabeth and Henry are arguing with Alison over her driving lessons, Elizabeth heads to work and Russell corners her and says that they found Juliette. She was hacking a video in to her husband and kid’s kitchen – they were able to track her IP address, she is hiding in a remote location in Southwest Algeria. They cant get close to her without blowing Operation Integrity, the Admiral says he can get an armed drone over to Juliette. Elizabeth protests, she doesn’t think an armed drone is the answer, they should bring Juliette in alive and question her – she reminds the President that it is illegal to murder an American citizen in another country. Russell reminds Elizabeth that she is the last of the coup conspirators and they have a chance to take her out – they have to take it. She could still be conspiring against the United States. Elizabeth reluctantly agrees to help them execute her friend Juliette – and says she will smooth things over with the Algerian government.

Henry is playing basketball at the gym and Juliette’s husband shows up – he tells her that he is worried about his daughter. He doesn’t know what to tell her about her mother, he begs Henry to get some information from Elizabeth on his wife. He invites Henry and Elizabeth to come to his daughter’s 6th birthday party tomorrow. Humphrey admits to Henry that he used to follow Juliette because he thought she was having an affair, and she used to sneak off to the 7-11 to use a payphone in the middle of the night.

Elizabeth heads to her office and Blake greets her, her team briefs her on President Sharaz’s visit. Apparently an Iranian man is going to be stoned to death in Tiran for being gay on the same day that they were supposed to sign the Peace Treaty. A Human Rights Campaign is planning a protest outside of the White House during the signing. Elizabeth orders Blake to try and stall the Iranians and push back the day of the stoning so that they protestors will lay off.

Henry meets up with Elizabeth and he tells her about his talk with Humphrey – Elizabeth says she is going to pull the phone records from the payphone that he was talking about to see who Juliette was talking to. She agrees to go to Lily’s birthday party at Juliette’s house, and then says she has to go to work and meet with the Algerians and convince them to let her blow up Juliette.

Elizabeth meets with the ambassador of Algeria and discusses sending in a drone to blow up Juliette – he argues that there could be civilians injured during the strike. He refuses to allow them to send in a drone, he offers to send in some of his own men to investigate the dwelling where they think Juliette is hiding. Elizabeth tells Jackson about the agreement she made with the ambassador – Russell screams at Elizabeth that she did this because she is friends with Juliette and she underminded the President. He warns her that if she doesn’t get on board the President is going to fire her.

Meanwhile, Elizabeth’s team spends the day on the phone with leaders in Iran trying to get them to postpone the stoning. A Human Rights activist named Brent arrives to talk to Jay, he informs him there is no way he is cancelling the protest. Jay reminds him that their organization has done wonders for gay rights. Brent rants that President Dalton doesn’t care about gay rights or else he wouldn’t be shaking hands with the Iranian leader who is stoning gays to death. Brent scoffs that Jay is no better than the monsters in Iran that are killing gays.

Elizabeth, Henry and the kids head to Lily’s birthday party. Lily tells Elizabeth that she has been wishing to see her mom Juliette, and she saw her head in the clouds with the angels. Juliette’s husband Aiden Humphrey corners Elizabeth in the kitchen – she insists that she doesn’t know anything about Juliette and lies, she promises to let him know if she hears anything about where Juliette is.

Jay barges in to Elizabeth’s office – he was up all night and he has a plan. Jordan has an Iranian soldier on their death row for spying – he was able to bribe Jordan with some F16’s and they are willing to release the spy to Iran. He is going to contact President Sharaz and see if he will cancel the stoning in exchange for the Iranian spy.

Russell calls Elizabeth in to his office – they went in to the dwelling with the Algerians and she was already gone. But, they found her laptop and blood-stained clothes. They realize that she set them up – she knew that they would send out a drone strike, and was hoping they would they she was dead. They found some footage of her at an airport last week, Elizabeth is shocked when she sees the photos – Juliette is wearing the same clothes that Lily described in her dream of her mom. Lily wasn’t dreaming, she really saw Juliette. Elizabeth tells Russell that Juliette is already in Washington DC. The FBI barges in to Aiden’s house, they inform him that he and Lily are in danger and they are going to be at their house 24/7, and will be following them whenever they leave.

Elizabeth gets the results from the information she requested on the payphone that Juliette used – she called a burner phone that belongs to a drug dealer that was just arrested. Jay interrupts, he is upset – the Iranians turned down their deal and they are going ahead with the stoning. He tells Elizabeth it is time to play their Ace and tell the Iranians there is no nuclear deal unless they cancel the stoning. Elizabeth tells him that is not an option and tries to send him out of her office. Jay isn’t giving up, he tells Elizabeth that at dawn an innocent man will be bound and buried in a hole from his waist up and then they will proceed to throw rocks at him until he is officially dead – which could be up to two hours of suffering. Elizabeth doesn’t want to hear it, Jay announces he won’t be attending the signing ceremony and storms out.

FBI Director Hendricks calls Elizabeth and tells him that he got a name for the burner phone – Juliette was in contact with a man named Bryan Kirtwell – a former army ranger. Kirtwell is a DC Metro Cop, and he is on duty at the sniper unit. Elizabeth orders Hendricks to pick up Kirtwell NOW, she thinks that he is going to assassinate the Iranian President at the signing ceremony.

Meanwhile, Kirtwell is on top of a roof with his sniper rifle aiming it at the Iranian President’s motorcade, right before he takes the shot the FBI storms the roof of the building and takes him in to custody. Juliette watches the signing on TV, she is furious when she realizes that Kirtwell didn’t follow her orders and take out the President. Inside the White House, President Sharaz has no idea that he narrowly escaped being shot by Kirtwell. He sits down with Elizabeth and President Dalton and they exchange pleasantries before they head out in front of the press for the signing ceremony. Outside the Human Rights activists move forward with their protest of the murder of a gay Iranian man.

Juliette heads to her house, her daughter Lilly and Aiden see her outside on the sidewalk and before they rush out to greet her she is surrounded by FBI agents and arrested and taken in to custody. Her kids and husband cry on the steps as they drag Lily away in handcuffs.

Elizabeth heads home and finds Henry and Alison studying for her driving test, her daughter jokes that her hair looked great at the peace signing. Elizabeth and Alison head out for some mother-daughter time and get frozen yogurt. Later that night Elizabeth returns and heads to bed with Henry – she says that she got a phone call and the FBI picked up Juliette and they want Elizabeth to be the one to interrogate her.