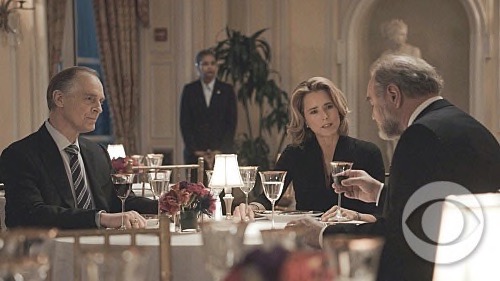 Tonight on CBS Madam Secretary airs with an all new Sunday April 5, season 1 episode 19 called, “Spartan Figures” and we have your weekly recap below. On tonight’s episode, Elizabeth [Tea Leoni] works with President Dalton to solve the Greek debt crisis, but not everyone in Washington finds the fruits of their collaboration pleasing.

On the last episode, while Elizabeth sought a diplomatic solution to a doomsday cult in Bolivia, a congressman attempted to negotiate with its leader was taken hostage. Meanwhile, Elizabeth and Henry met Stevie’s much older boyfriend. Did you watch the last episode? If you missed it, we have a full and detailed recap right here for you.

On tonight’s episode as per the CBS synopsis, “Elizabeth works with President Dalton to solve the Greek debt crisis, but not everyone in Washington finds the fruits of their collaboration pleasing. Meanwhile, Henry has a new job offer to consider; and Stevie reignites a friendship with the president’s son.”

#MadamSecretary begins with Bess and Henry at a country house. He’s doing maintenance on the house out in the snow and she offers to warm up his hands. They go for a walk in the snow and talk about not selling the house. She wants to retire there and calls it a touchstone. They see the kids come back from their horse ride. Jason, Stevie and Alison complain about having to much the stalls.

Nadine and Blake show up and ask what the smell is – they don’t recognize manure. Nadine says Russell has been calling and the President wants to talk to her. Bess makes it to the White House to find Max chatting with the Prez about the Greeks. Bess says it’s the best they could do and Max says they are ruining the US economy. Max wants him to scuttle the agreement and get tough with the Greeks.

Max is annoyed and tells Conrad that his anti-business stance will cost him his reelection. Russell says he’s made Europe happy with the deal and he should take a victory lap in Brussels. Russell says it’s a big win and he should take credit for it. Stevie rants about the fatty snacks in the kitchen. Her boss/BF tries to kiss her and then she gets a text from a friend of hers who likes to come and go.

She goes to see Harrison – the president’s son – who swoops her in a hug then takes her bowling in the White House lanes. He tells her he just got out of rehab. He says it was oxy and says he’s been clean 90 days. He says he wishes they hung out more like this. At the Smithsonian, some Greek treasures are being packed up. Max shows up and says he’s seizing them. He has a court order to pay debts.

The curator grabs for her phone. Matt reads to the gang about how Max repod the Greek treasures. Nadine says the Greeks owe him $1.3 billion and are rioting in the streets over the figures being seized by Max. Nadine says they need to focus on Brussels. Jay is pleased they’re going and says to watch out for the Swedes but Matt says he’s hot for the Spaniards. Nadine tells them all to behave.

Bess calls Max about taking the statues and he says bonds are a promise and he’s holding the Greeks accountable. He says he’s going to get paid in full and he also mentions that he’s hoping it tarnishes the President as a nice side benefit. Russell comes barging in while Bess is eating and she tells Blake to put a guard and lock on her door. She reminds Russell he can always call instead.

He says he’s not going to Brussels and says people either think the Prez was involved or weak when it came to Max. He steals her fries and says he’s going to work the talk shows to try and flip this. He tells her she has to be flawless. Henry lectures in class then wraps it up. A general steps into class and waits. He introduces himself as General Sarno then says he’s been following his career.

He says he’s the commandant of the National War College in DC and says they’ve taken an interest in him. Sarno says they’d like to recruit him to the school. Henry says it’s an honor but he likes what he does there. He says Henry would be teaching future military and national security leaders. He says there’s no conflict of interest with Bess and hands him a card asking him to think about it.

Stevie leaves a message for Harrison while Arthur lurks nearby. He tells her not to engage but Stevie says he’s been through a hard time. He tells her not to enable the guy. Bess is packing for Brussels and tells Henry he can’t accept that job without a family meeting but he says he won’t take it all. He says it makes no sense for a religious scholar to teach there but Bess thinks it’s a good idea.

Russell calls Bess as they both see on the news that the Greeks are rejecting the debt deal. Bess says they’ll default and there will be global economic collapse. Bess and the Prez touch down in Brussels and the German chancellor confronts them about Max’s actions. She says the Greeks won’t make their deal without their prized antiquities. She says Europe must solve this on their own. Bess tells Conrad she is on this and will get it worked out.

Nadine says everyone is mad at them and Matt is upset they’re not being invited to parties because of this. Bess says she needs a quick fix. She says she needs leverage on Max and Matt says they need to dig into the judge that gave the court order. They all dig in. Bess is at dinner and tells the Greek Prime Minister they’re trying to get their statues back. He’s not very flexible.

He says he’s heard that Conrad’s own party doesn’t want him for reelection and says not to lecture him. He tells the Prez he should resign now and Conrad leaves angry. Stevie is out with Arthur and sees a news story about an ambulance being called to the White House. She says it scares her since she hasn’t heard from Harrison. Bess asks Conrad if what the Greek said is true. He says it may be.

He tells her she’ll keep her post no matter what. She says she’s only there because of him. He says maybe Germany can fix the economy themselves. Conrad says he’s shut out of the discussion and is being blamed for the catastrophe. She encourages him but he won’t have it. Blake is out with the Germans partying. He has to pee and the only toilet is a pay one that he can’t get to work.

Blake pees on a hedge nearby and then a police car pulls up with lights flashing. Bess talks to her staff and it looks like it’s statues or nothing. She asks for good ideas but Daisy says they haven’t found any dirt on Max yet. Daisy says she and her GF had to wait a year to see the statues. Bess wonders about the profit split and how that may play into this.

Stevie calls Bess and asks how the Prez seems and her mom says he seems stressed. She tells her mom about Harrison. Blake is released from the police station and Nadine is waiting. She says he’s the last person she expected to get in trouble. She calls him an embarrassment and tells him to bathe and burn his clothing. Bess asks Conrad if he’s really leaving. She asks for just a minute alone.

She asks if it’s Harrison that’s bothering him. She says Stevie called her and he says he’s four day out of rehab and passed out in his room from heroin. He says it will hit the news soon. Bess offers sympathy but says his son is an adult and says he should let him work through it while he focuses on his own work. She reminds him how he inspired them all at the CIA after 9/11.

She says they have to try and fix this. Russell comes to see Henry at home about the War College offer. He says he’s the one who came up with the offer. He asks why Henry isn’t taking it and says he should be teaching future military leaders. Henry asks if it’s a cover for intelligence work. Russell implies that’s a possibility. Henry says he can’t answer to the DOD but Russell says he can be a voice of reason.

Bess calls Max and says the statues have to go out onto the tour. She says he will get all of the profits until the debt is paid in full. He says that will take forever. She says it’s a fix the Greeks can live with and says his shareholders don’t like him taking things hostage. Max agrees to the deal. Jay tells her that he can’t reach any of the Euro leaders or their staff.

Blake says the Germans are having a secret meeting with the other leaders and he gets a text. He says the meeting is right now. Bess runs to catch Conrad and tells him that the Germans are trying to cut them out of the deal. She and the Prez go to crash the meeting. He says he’s sorry they’re late but the German Chancellor says they’re not welcome. She says their minds are made up.

She wants the Greeks punished and says he doesn’t have enough authority to hold anyone’s attention. Conrad starts calling out the other world leaders and he wins it big. Stevie comes to see Harrison at his new rehab facility. He says he’s going to be a mess for a while and says he can’t handle the pressure to act like a normal person. She says she flamed out of college and maxed out her mom’s credit cards.

His dad shows up and Stevie greets him. Harrison says he heard things went well in Brussels and Stevie takes off. Henry tells Bess that he’s thinking about the War College job. They agree that he should take the other job and sell the house and save all the bucolic stuff for when their old. They worry about telling the kids but then the kids tell them they’re bored and want to leave.