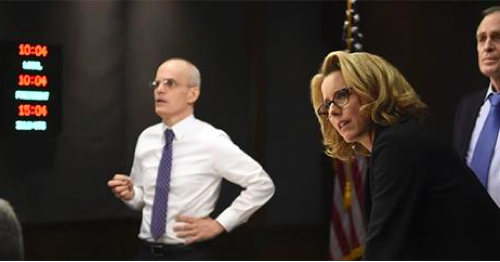 Tonight on CBS Madam Secretary airs with an all new Sunday March 29, season 1 episode 18 called, “The Time Is at Hand” and we have your weekly recap below. On tonight’s episode, a congressman is taken hostage while attempting to negotiate with the leader of a doomsday cult in Bolivia; Elizabeth [Tea Leoni] and Henry [Tim Daly] are introduced to Stevie’s [Wallis Currie-Wood] much older boyfriend.

On the last episode, Elizabeth struggled to hold herself together emotionally following the attack in Iran; at the same time, she’s working to prevent an ecological disaster in the Amazon and preparing for a national television appearance on “Face the Nation.” Meanwhile, at home, she and Henry disagreed about the level of protection Jason should receive at his new school. Did you watch the last episode? If you missed it, we have a full and detailed recap right here for you.

On tonight’s episode as per the CBS synopsis, “While Elizabeth seeks a diplomatic solution to a doomsday cult in Bolivia, a congressman attempting to negotiate with its leader is taken hostage. Meanwhile, Elizabeth and Henry meet Stevie’s much older boyfriend.”

Tonight’s episode of Madam Secretary kicks off with Elizabeth giving a speech at a charity – she jokes that Russell Jackson and the Cabinet members don’t always see eye to eye, but thanks everyone for all of their help supporting the Global charity. After her speech Elizabeth makes her rounds, Matt and Daisy run in to an old friend of Matt’s named Zach. A man named Jerry corners Liz, he says Congressman Ames sent him, and asks for her help supporting a group that fights suicides of Americans trapped in a cult in South America. Jerry says that his daughter Kristine and 184 others joined the cult and flew to South America, and the leader has cut them off from contacting their families. Jerry shows Elizabeth an email he received from his daughter telling him that in a few days she and all of the others were going to participate in a mass suicide.

At the micro-loan office Stevie and her co-workers are being yelled at by their boss for screwing around and racing in office chairs. Stevie finally gets home at 10:00 PM, and her parents want to know why she is working so many hours. Elizabeth can tell that there is a guy at the office that Stevie is interested in – that is the only reason she is dressing up for work and working so many hours. During breakfast Elizabeth’s kids read articles about her speech at the charity and laugh about how she “tamed the crowd.” After the kids are off to school, Elizabeth asks Henry about the cult called the “Covenant of John.” She asks Henry to look in to it while she is at work. Henry tries to get her to take her anti-anxiety medicine, but she doesn’t want to “be off her game.”

Elizabeth’s team researches the cult and learns that it is in Bolivia and they are lead by a former professor named Finch – they do plan to commit a mass suicide before the end of the world. Elizabeth orders them to speak to Bolivia’s leaders about stopping the suicide without infringing on religious rights. Nadine warns her that they have a delicate relationship with Bolivia because last year the DA botched a drug bust there.

Elizabeth leaves the office to track down Congressman Ames, she tells him that she doesn’t appreciate being ambushed by Ames at the charity and she knows he sent him. Ames pleads with her to let him go to Bolivia and take care of the cult – Elizabeth tells him to back off and let her handle it. Elizabeth meets up with the Bolivia Ambassador and explains what is happening with the cult. The ambassador reminds her that the last time they let American law enforcement agencies on their soil there were innocent villagers killed in a drug bust. The Ambassador tells her that they need something more concrete than an email from Jerry’s daughter. Elizabeth tells her team to find something illegal in Bolivia so that they can get in there like drugs or fire arms, and she orders them to make sure Congressman Ames doesn’t fly to Bolivia.

Stevie’s boss Arthur (who is much older than her) shows up at her house to pick her up – and she snaps at him that her parents don’t know about him. Elizabeth and Henry catch them bickering on the porch and Elizabeth teases that she is dating her boss. Henry forces Arthur to sit down with him and Elizabeth and have drinks before he and Stevie head out on their date. Arthur tells Stevie’s parents about his daughter, divorce, and when he joined Occupy and decided to get involved in micro-loans. Henry and Arthur wind up in a heated debate about micro-loans, Henry embarrasses his daughter by joking that she wanted to join the Communist Party in high-school. After Arthur and Stevie leave for their dinner Elizabeth lectures Henry about embarrassing their daughter – she reassures Henry that in six months Arthur will be a thing of the past.

Matt goes out for drinks with his old friend Zach and they discuss their careers, Matt confesses that he decided he wanted to start writing speeches when he was in 6th grade and went to space camp – Zach is writing an article on Matt. Zach gushes that the speech he wrote for Elizabeth is getting a lot of airplay and he could be “the next big thing,” he encourages him to step out from behind Elizabeth’s shadows.

Matt heads to work the next morning and no one is thrilled about the article that came out calling him a “hot new voice.” Elizabeth’s right hand man Mike orders Matt to “go back to the shadows and toil in obscurity” or else they will find someone else to do his job. Elizabeth arrives and there is bad news, apparently Congressman Ames snuck off to Bolivia and tried to stop the mass suicide. Reverend Finch took Ames hostage at gunpoint and they are going to kill him if the US tries to stop the suicide. Russell Jackson storms in to Elizabeth’s office and demands to know what happened in Bolivia – he tells her to forget about it, they are sending in the army. Elizabeth begs him to give her 24 hours to get it cleaned up and get Ames back safe, Russell says that they don’t have 24 hours.

Elizabeth sits down with Jerry, the father that cornered Elizabeth at the charity and told her about his daughter participating in the mass suicide in Bolivia. She reassures him that they are doing everything in their power to get his daughter Kristina back home safely. Elizabeth is moved by her talk with Jerry and visits Henry to brainstorm up ideas to save the Americans that are part of the cult and Ames. Henry has been studying Finch, he thinks that if they “make the leader feel heard” they will be able to talk him down and get him to cancel the mass suicide. Henry reveals that in a similar situation in Waco Biblical scholars were able to talk the cult leader down.

Elizabeth visits the President and begs him to let Henry call Finch – Jackson thinks it may be a good idea and Henry could work with him and be able to talk him down. If they send the army in they will have a debacle like what happened in Waco, one innocent phone call could save 100 plus Americans. The President agrees to let Henry talk to Finch, on once condition – he wants him to go in person, not call. Elizabeth is skeptical about letting Henry go to the dangerous compound in Bolivia, but the next morning she sees him off at the airport.

Elizabeth heads to the office, and sits down with the President and Russell as they communicate with the Navy Seals that are with Henry. Elizabeth is not happy when she learns that Russell has snipers in place – on the video surveillance Elizabeth sees Jerry’s daughter Kristine. When they arrive at the gate, Kristine tells Henry that he can only come inside by himself, he has to leave the Navy Seal officers at the gate. Elizabeth whines that Henry can’t go in without back-up, but Henry goes in by himself. They have no surveillance inside the compound, so they have no idea what Henry is doing. They manage to set up a long-range microphone so that they can listen in on Henry and Finch’s conversation.

Elizabeth and Russell Jackson listen in on Henry and Finch’s conversation about God and Church, Finch begins rambling crazily that he “has been chosen” and the messenger came on a white horse and told him what to do. Henry explains to Finch that there is another interpretation of the Book of John – he tells Finch that if there are any followers that don’t want to be there then he needs to open the gates and let them leave at their own free will.

Henry is making progress with Finch and he tells him where Congressman Ames is being held, but one of his followers take Finch by knife point and scream that he is brainwashing Finch. While Henry and the follower are fighting, one of the snipers takes him out and saves Henry. When Kristine realizes that the follower was shot and killed she runs out of the tent and starts screaming to the members of the cult that it is time. They begin rushing around the compound and preparing for their mass suicide. Henry shouts the code word to the Navy Seals – telling them to move in before the cult commits suicide.

Henry and the remaining cult members land back in the United States, their families all rush to greet them. Henry is devastated though – he can’t believe that he was unable to save the 30 people. Elizabeth asks Henry about Kristine, he reveals that she was one of the ones that killed themselves. Elizabeth finds Kristine’s dad Jerry, he is waiting for his daughter, she explains that they were too late and she committed suicide before they could save her.

At home that night Stevie is ranting to Henry about her Irish poetry teacher – she asks Henry how his trip to Bolivia was, he admits that it was surprisingly eventful. Stevie helps him prepare dinner and rants that the food they have is not Non-GMO. Henry thinks that Non-GMO food is a crazy idea that Arthur put in to her head. They begin arguing about how old Arthur is and whether he is brain-washing her. Stevie storms off, Elizabeth comforts Henry and tells him that their daughter is not the kind of girl that gets brainwashed by her boyfriends.