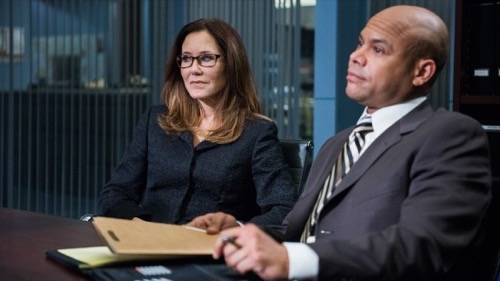 Tonight on TLC Major Crimes airs with their all new Monday July 13, season 4 episode 6 called “Personal Effects.” We’ve got your recap down below! On tonight’s episode a pile of bones is discovered, and the squad discovers the victim had a troubled past. Meanwhile, as Rusty [Graham Patrick Martin] continues snooping into the Alice case with help from a new friend, he also gets drawn into helping Provenza [G.W. Bailey] make a big move.

On the last episode while the Major Crimes unit investigates a complicated gangland shooting, Det. Amy Sykes found she had to protect the identify of a witness capable of identifying the killer. Rusty struggled with how to manage newly gained information on the Alice case and Lt. Flynn worked to gain the courage to take his relationship with Captain Raydor to the next level. Did you watch the last episode? If you missed it we have a full and detailed recap, right here for you.

On tonight’s episode per the TLC synopsis “the squad attempts to identify a possible male murder victim from his skeletal remains, only to find he may have a serious criminal past of his own . Rusty continues his investigation of the Alice case with the help of a new friend while Provenza pays him to help him with a major move.”

Captain Raydor doesn’t always get to choose the cases she gets but this one she did choose and on tonight’s episode of “Major Crimes” that’s a decision she later came to regret.

See someone had left the body of Tate Harrison out in the desert. So eventually scavengers ended up pulling it into bits and pieces until the remains were scattered all over. But, though it was a struggle, each piece was found in the end and collected by the Hollywood unit.

And it was Raydor that went out of her way to get this case turned over to her people. Because she found who Tate really was and knew she couldn’t pass up the case. Even if it might go against her better instincts!

Tate was unfortunately a rapist. Something that was figured out the moment his DNA entered the system and was immediately pinged in an open rape case. So that’s why Raydor took this case on despite knowing that she might actually get justice for a rapist.

But as the case delved further into Tate’s seedy past and she found out even more about this so called “victim”, she and her team learned they were dealing with the murder of a possible sociopath. For Tate ended up doing a lot more than just targeting women. It looks like he was also a con man and when he was allegedly getting sober – he reportedly tried to make amends by stealing from the very same people he was apologizing to.

As part of the program to getting sober, addicts are asked to make amends to all those they’ve had hurt while they were using. And Tate had a pretty long list of people. He had brother on there and yet the instant his brother turned his back – Tate then attempted to steal his sister-in-law’s wallet.

And he has a woman that used to work for his family on the list as well. Tate’s brother had even helped him find out where Mallory Greggs was working now. Before he had beaten up his brother and kicked him out of the house. So the team got another suspect on top of the confirmed rape victim and disgruntled brother.

Though, when they finally met Mallory, Raydor felt like she looked familiar. Mallory and Kelly Press, who was the rape victim that hadn’t officially been ruled out by time they met Mallory, are two women that can pass as sisters. They both have dark hair and dark eyes. And they even look like they’re the same height.

Kelly however did not have access to the gun that killed Tate. Meanwhile Mallory’s husband had the weapon registered underneath his name. So she was the more viable suspect.

And after she came in, looking like Kelly Press it soon became clear why she would kill Tate.

Mallory had been one of his victims. She had worked at his family’s company years ago and during the office party he drugged her. Like he did with Kelly, before raping them both.

Only Mallory had been married at the time and nine months after the assault she had given birth to a son she had hoped was her husband’s. But Tim was Tate’s. And once Tate got a look at him he then wanted visitation rights.

Not because he felt it was the right thing to do but because he wanted to convince his parents to start giving him money again.

Mallory of course tried to turn him down but Tate refused to give up and so she tricked into meeting her. Drugged him and then killed him. However she’s going to get away with it.

Neither the gun nor the bullet was ever found. And all the evidence they had against Mallory was hypothetical.

They know what type of gun killed Tat but it doesn’t matter if they can’t match up ballistics. Plus the bullet went in at a close range on his temple. So with a good lawyer, Mallory can paint Tate’ death as a suicide.

And so the team had to give this one up.

Though they weren’t exactly heartbroken by it!