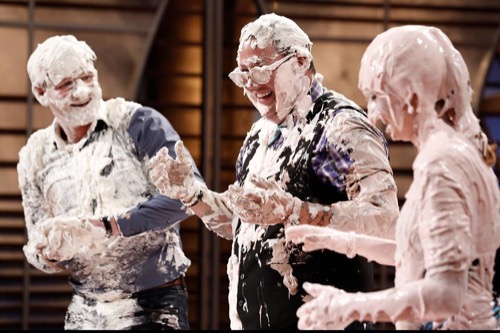 Tonight on FOX Gordon Ramsay’s Masterchef Junior continues with an all new Friday November 13, season 4 episode 2 called “A Sweet Surprise,” and we have your weekly recap below. On tonight’s episode, season 2 winner Logan returns to give advice to the remaining contestants, and the top three cooks from the previous elimination challenge participate in a cupcake-frosting contest.

On the last episode, the Season 4 premiere introduced 24 new contestants, who began with a mystery-box challenge that involved making a burger and a side dish, and the winner got to choose the main ingredient for the first elimination round. Did you watch the last episode? If you missed it we have you covered with a full and detailed recap right here for you.

On tonight’s episode as per the Fox synopsis, “Season Two winner Logan returns to the MASTERCHEF JUNIOR kitchen and offer some advice to the remaining contestants. The top three contestants from the previous elimination challenge will compete in a cupcake-frosting contest, during which only the winner can keep the judges safe from a sticky situation. Then, in the next challenge, the contestants will be tasked with making a scallop dish in order to move onto the next round in the competition.”

Don’t forget to join us for our live recap tonight at 8:00pm when Masterchef Junior season 4 episode 2 airs on Fox. While you wait for the recap, let us know how you are enjoying this season of MasterChef Junior.

Welcome to an all new recap of MasterChef Junior. On tonight’s episode of MasterChef Junior, the judges have a specific challenge for the competition winners from last week. For it seems they wanted to pit Jesse, Sam, and Addison in a cupcake piping contest.

That’s right a cupcake piping contest. And the contest demanded that the three contestants race each other in seeing who could pipe the perfect frosting on as many cupcakes as they cake. Though fortunately they were given plenty of chances seeing as they were each given a minimum of sixty cupcakes as well as six bags of piping and six bowels of frosting.

So that sounded like fun but what made the contest extra special was that each winner was also going to stand for a judge. And therefore whoever won the competition was free from elimination. While whoever lost, got to dunk a giant piping bag of frosting on the judge that was standing in for them.

Thus it was a win/win sort of situation.

And later when Former MasterChef champion Logan returned, he got to judge all the cupcakes as an impartial viewer. Now he liked the effort that Jesse and Sam in even if they didn’t always get it right but what sunk Addison was that she had problems with opening the piping bags. You could have actually seen her growing frustrated with the process as it went on and that in turn made some of the cupcakes that she did manage to pipe – unfortunately sloppy.

So at the end of the competition, Addison got to frost Gordon Ramsay as her consolation prize and Jesse got to do the same with Christina Tosi.

Yet the frosting competition was nothing in comparison to tonight’s main challenge. The children have seen scallops before and some of them have eaten it but apparently could be weirded out by scallops in their natural form. In case you didn’t know scallops have the appearance of giant clams. And once you managed to crack open its shell – there’s still a process call de-skirting just get to the actual meat known as the scallop.

And so it was the contestant’s responsibility to come up with a recipe that would highlight the scallop but they had to get to their own scallop meant. So there were some kids that were freaking out and even using gloves because the nasty parts. Though that’s not when Ian did when confronted with a challenge.

Ian simply broke down in tears as he struggled to open up the scallops. And ultimately the judges ended up taking pity on him so Ramsay helped him open some of the scallops.

But Ian’s only problem was that he couldn’t open the scallops on his own. He did on the other hand already had a recipe in place and had begun working on his side dishes. So Ian was on still on good form. Unlike Annabelle.

Annabelle had come up with a grand scheme to cook her scallops in two perfect but different ways. And if she had been able to pull it off – she would have set herself apart from the others. However Annabelle made one critical mistake. She went on to burn all of her scallops and did not have that much time to make more. So it was a bit of a race for her in getting some remaining scallops from others and quickly pan searing them.

Though what counts is when they don’t give up and quite a few contestants were later called out for doing that exact thing. There was Chad who didn’t necessarily bother making a scallop dish because he was unused to it. So he just threw them into a meatball and spaghetti dish. Which didn’t take that much of an effort.

So there was one clear winner for tonight’s challenge. And it was Tae-Ho. Tae-Ho had won with his Scallops and risotto dish that had been bursting with color and flavor.

Yet two had to be sent home and so the judges chose to eliminate both Annabelle and Chad. Annabelle tried to be bold but neither of her scallop dishes were up to par and it would have been better if she had merely focused on one dish. And Chad’s problem was that he didn’t try. So maybe these two can work on their scallops at home and one return to MasterChef in the future.