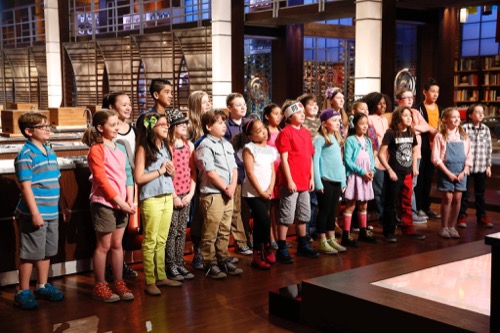 Tonight on FOX Gordon Ramsay’s Masterchef Junior returns with an all new Friday November 6, season 4 premiere called “New Kids on the Chopping Block,” and we have your weekly recap below. On tonight’s episode, the Season 4 premiere introduces 24 new contestants.

For those of you who don’t know, Masterchef Junior is about  talented young cooks between the ages of 8 and 13 competing against each other.

On tonight’s episode as per the Fox synopsis, “the Season 4 premiere introduces 24 new contestants, who begin with a mystery-box challenge that involves making a burger and a side dish, and the winner gets to choose the main ingredient for the first elimination round.”

Don’t forget to join us for our live recap tonight at 8:00pm when Masterchef Junior season 4 premieres on Fox. While you wait for the recap, let us know how excited you are for this season of MasterChef Junior.

The youngest and best home-cooks in America are back tonight for an all new season of “MasterChef Junior”. However it’s no easy feat to make it to the final two much less win the title of MasterChef Junior along with the hundred thousand dollar prize. Therefore the beginning group of twenty-four kids has to unfortunately be thinned out over the course of a season.

And that’s why tonight’s Mystery Box challenge just happened to make a very easy burger into a complicated work of art.

To begin with, the kids had to collect their aprons by breaking into a large Paper Mache of Chef Gordon Ramsay’s head. And so it was nice game for a couple of minutes because who doesn’t like a piñata. Yet after the kids had collected their aprons, they were given their very first mystery box and they found a pair of buns insde.

So it turns out they had to cook burger, but the Judges didn’t want any old burger. They want a burger that personally reflected the chef’s interest and style as well as a delicious side to compliment the burger. And naturally the children had to all do all of that within a timeframe.

But the judges would go on to only choose three of the dishes. Usually the ones they find the most creative or visually appealing. So they ultimately decided to go with Avery who was nine, Zac who was twelve, and Kya was the youngest at eight.

Avery had used her southern roots to come with a Southern Style Pork and Venison burger with coleslaw. And it looked delicious. Though the judges did find some things she could have improved on. For example, her bun was too soggy and could have really been toasted for a little while longer.

And another critique was that they wished she could have used a little more pork. Although that might have been because of one judge’s personal taste. So that technically couldn’t be held against her.

Then, following Avery was Zac. Zac was a bit of newcomer to cooking seeing as he’s only being doing for a year and half but he impressed the judges with his dish. He managed to make a Chuck and Sirloin Cheeseburger with onion rings. And what attracted Christina Tosi to it was its magnificent colors.

He truly had a golden dish yet she also found it to be somewhat lacking in flavor. It apparently needed a little more seasoning and it could have been cooked a little bit more. Other than that, it was a good dish.

Yet neither Avery nor Zac could match Kya’s dish which just happened to be a Wagyu burger with apple fries.

Kya was originally from Hong Kong and her father used to make her Wagyu burgers all the time. So it was a meat she was used to though she chose to jazz it up with two kinds of cheeses as well as some appetizing apple fires. And that’s why she was chosen as the winner of the first Mystery Box challenge of the season.

And as part of her prize, Kya was exempt from the first elimination. Which is always a good thing to have in your back pocket. But Kya also got to choose a friend that would share in exemption and they got to eat cake while everyone cooked. So she chose Vivian.

Kya felt Vivian was a great cook and that’s why she went with her but everyone else had to cook a desert dish with marshmallow of all things. Not only marshmallow considered very sweet, it also takes a lot of finessing to cook it at just right the temperature. Thus Kya and Vivian really were lucky on this one.

In their given sixty minutes, one kid burned his marshmallow until it was unrecognizable and then there was Alexander who eventually broke down in tears because of his plating. He believed he could have done a better job and he couldn’t stop beating himself up even as the judges saw the potential. So when his dish was tasted, a Chocolate Marshmallow Pie with Banana and Graham Cracker crust, he was left surprised when Christina ended up loving the flavor of his dish.

And the rest of the dishes were all pretty good efforts. However the one thing that every chef must know is how to sell a dish. Ian went up to the podium with his Apple Crostata and he said he could serve it with the sauce because the sauce had become vomit.

So he told anyone else that, they would be turned off from trying out the rest of his food and Ramsay always. Though he liked the effort that Ian did make so he gave him some much needed criticism.

And during tonight’s elimination, it was both Kade and Alexander that were sent home. Alexander did need to work on his plating but Kade had to put in a lot more work on his end instead of taking the easier road.