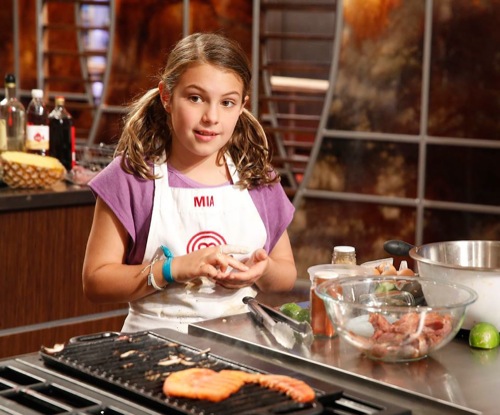 Tonight on FOX Gordon Ramsay’s Masterchef Junior continues with an all new Tuesday January 20, season 3 episode 3 called “Grandad Gordon!” and we have your weekly recap below. Tonight, twelve cooks remain for a mystery-box challenge using ingredients that get better with age. Later, the contestants work with the most dangerous protein in the show’s history.

On the last episode, before the next challenge, three of the junior home cooks faced a sweet competition as they raced to see who could top all of their pies with whipped meringue first. The winner of the challenge did not only get a major advantage in the next challenge, but also help the judges get a slice of victory. After a fun and messy competition, the judges tasked the kids with their first team competition, where each pair had to create their own sausage dishes. Did you watch the last episode? If you missed it, we have a full and detailed recap right here for you.

On tonight’s episode as per the Fox synopsis, “the remaining 12 junior home cooks face a giant mystery box challenge that delivers the shock of the season. The pint-sized cooks must prepare restaurant-quality dishes using ingredients that get better with age, and the winner of the challenge will have a significant advantage in the next round. Later in the elimination challenge, the contestants come face-to-face with the most dangerous protein in the history.”

Don’t forget to join us for our recap tonight at 8:00pm when MasterChef Junior Season 3 episode 3 airs on Fox. While you wait for the recap, let us know how you are enjoying this season of MasterChef Junior.

The kids come in to find a mystery box at each of their stations plus a giant one down front. Riley thinks the judges are in there and says they’re going to cook them. Snores and fart sounds emit from the box. The box is slowly lifted and we see Gordon and Graham done up like old guys. The kids laugh. They ask where Joe is and Gordon says Joe didn’t make it. Gordon says he didn’t make it in time to get into the box. Joe pulls up on a scooter with an Italian flag and his chest hair sticking out. Riley asks what happened to him.

#GrandpaGordon says it’s time for a mystery box challenge. Joe says there’s a reason they all got old for this challenge. The kids lift their boxes and see ingredients that get better with age. They have aged steak, ham, salmon, preserved lemon, aged vinegar and bleu cheese. Graham says the cheese smells like Old Joe who growls. Graham says they also have access to a limited pantry of baby vegetables and a stable pantry box. Gordon tells them to open the drawer and they each have a Microsoft Surface. Graham says to Skype their favorite old person to ask advice.

The kids call their older loved ones to get advice and support then end the calls. Joe says they have one hour to use all or some of the ingredients. Gordon says the winner gets a huge advantage in the next elimination challenge. The kids run off to the pantry. They talk about Riley being younger than the vinegar. Joe asks Kayla if she likes his outfit and she says no. She’s making salmon and sauerkraut. He rubs some sticky cheese on his armpit and leaves one of his old socks with her. The kids around there are all grossed out.

Andrew is making steak and potatoes. He tells Gordon he wants to open a crepe restaurant called Holy Crepe. Riley is making steak and smoky beef ramen. Riley teases Graham about his old bushy eyebrows. They are now down the last few minutes and they’re rushing to plate. They are down to the last minute and Gordon counts down from 10 then it’s hands off. The judges go look around to see which dishes they want to taste. Gordon says the dishes all look excellent but says they need to turn back time before they taste. They leave and come back looking young.

Gordon says the first dish they want to taste is Jack’s. He made pan seared new your strip with couscous and fennel salad. Gordon tastes and says it’s simple, the cook on the steak is perfect and the couscous is cooked perfectly. Graham tastes and says the steak has a nice spice rub. Joe says it’s really good and that he used good technique. He tells him to keep up the good work. Graham then calls down Riley. It’s pan seared New York strip with smoky beef ramen.

He used salt, pepper and miso on the beef. Graham says the steak is awesome and says it’s the strongest dish he’s done. Gordon tastes and likes. He hands Riley a bite to taste. Gordon says it’s Riley on a plate and is a great job. Joe then calls down the final kid chef – it’s Andrew. He made grilled New York strip with black garlic sauce and smashed potatoes. Joe says it looks like a restaurant dish and asks if he eats out a lot. Andrew says his parents like to eat at home with him cooking. Joe tells him it’s a great job. Gordon says it’s visually nice. He asks why smashed potatoes and Andrew says they’re rustic.

Gordon says the winner will get a huge advantage and says one dish had a fine edge and congratulates Andrew. The judges take him into the pantry to discuss the elimination test. Graham says he doesn’t have to cook and Joe says he now has to make a choice. He has to choose between three dangerous animals that you can eat or they can eat you. The first is rattlesnake. Joe says they’re poisonous but their meat is delicious. Andrew asks if this is MasterChef Junior. Graham uncovers snapping turtle and says if they’re not cooked right, they can be tough.

Gordon says the next thing loves eating, lives in swamps and can snap when he’s angry. They drop the curtain around the table and there’s a giant alligator. Gordon says the tail is absolutely delicious but difficult to cook because it’s easy to overcook. They tell him to pick the animal. They come back out and send Andrew upstairs. Joe tells them that Andrew gets to eat pizza while he watches. The other kids are envious. Gordon says he picked between three scary ingredients and tells them what the choices were. The kids are surprised.

Graham tells Andrew to tell them which animal he chose for the #DeadliestChallenge. Andrew says they need to go in the pantry and see it. Graham says they have one hour to cook it. They all run to the pantry and they scream when they see the animals. They have to cook alligator! Riley says it’s bigger than him. Jenna is making alligator curry over Jasmine rice. Nathan is making alligator chili. Kyler says this is crazy. Gordon says it tastes like chicken with the after taste of fish. Gordon says he’d make something Cajun but Graham says he’d make schnitzel.

They think Andrew is gunning for Jimmy, Jenna and Jack on this one hoping they’ll over-complicate it. Cory is making alligator stir fry. Jimmy says he’s never had it but is making alligator fajitas. Joe says there are a lot of good dishes out there. Joe says they didn’t over-complicate like Andrew may have been hoping they would do. The cooking is over and it’s tasting time. They start with Jenna who made alligator curry over jasmine rice with raita. Gordon tastes and says it’s refined and the alligator was really tender. Graham tastes and says it’s a great use of spice.

Joe tastes and says it’s complex, the rice is perfectly cooked and says she’s a curry master. He asks if she’s been to India then does some yoga with her. Graham says not to throw out a hip. Joe falls over and takes some of the stuff down with him. The kids are all laughing themselves sick. Next up is Kyler with his grilled alligator with rice and pepper sauce. Graham says the alligator is tough and says it’s almost like jerky. He tastes and says the outside cook is good but otherwise it’s overcooked and dry. Next up is Mia with her alligator tacos with grilled watermelon salsa.

Gordon says the alligator is tough but the chipotle mayo is good. He says it was a smart idea let down by the cook on the gator. Graham calls down Cory who has made alligator stir fry with a fried egg on top. Graham says it’s one of the best things he’s had in the competition. Joe then calls down Nathan. He cooked alligator chili with lime sour cream. He used a bit of dark chocolate. Joe is intrigued and says it’s delicious. He says the flavors are layered and great. Gordon says he wishes everyone could taste it. He says he’s a big credit to his parents.

Last is Jimmy who has made alligator fajitas with guacamole. Joe tastes and says the guac is good but the alligator has good flavor but says it’s a bit too simple. He asks what he did with his hour. Joe says he thought he would push it more. Jenna hopes he doesn’t get sent home since they’re friends. Gordon says at least two will go home tonight and the judges go to talk. They say that Jimmy seemed to opt out by making a 10 minute dish. Joe says they all did an extraordinary job but there are three standout dishes. They recognize Jenna, Cory and Nathan as having prepped the best dish.

They call down Mia, Jimmy and Kyler as the three bottom competitors. Joe says one of them is safe and two will be going home. They tell Jimmy that he barely escaped elimination tonight and tell him they want to see more from him from now on. They tell Mia and Kyler they’re going home but Gordon says they’ve done well and need to keep on cooking. The kids all come to hug them goodbye. Kyler says he’s proud of himself for making the top 12. Mia says this is better than being in school and that she’s made a lot of friends.