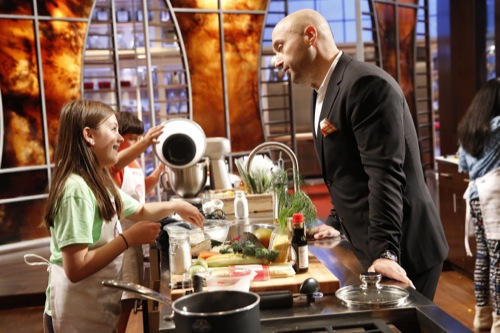 Tonight on FOX Gordon Ramsay’s Masterchef Junior continues with a new Tuesday January 6, season 3 premiere called “The Class of 2015,” and we have your weekly recap below. Tonight, season 3 begins with the introduction of 19 new cooks, who tackle their first mystery-box challenge by making a dish with only the ingredients they are given. The winner gets to pick the pasta the other contestants will prepare for the judges.

On the last episode, in the exciting season finale, the two finalists competed head-to-head and prepared the most important three-course menu of their lives for the title of Masterchef Junior. Did you watch the last episode? If you missed it, we have a full and detailed recap right here for you.

On tonight’s episode as per the Fox synopsis, “America’s Top 19 junior home cooks are introduced to their first mystery box challenge, in which they must make a complete restaurant-quality dish using any of the ingredients they are given. The winner of the challenge will have a significant advantage and select which of the judges’ favorite pastas the remaining contestants will prepare in the elimination round. Later, the top junior home cooks with the best dishes will advance in the competition”

Don’t forget to join us for our live recap tonight at 8:00pm when MasterChef Junior Season 3 premiere episode airs on Fox. While you wait for the recap, let us know how your enjoying this season of MasterChef.

#MasterChefJunior starts now. There are 19 kids to start with and Gordon reminds them that the prize is $100,000 plus the trophy. Joe says the trophy is the most coveted in the culinary world (ha!). Graham shows the kids the MasterChef white apron. Gordon tells them to head to the pantry to find their individual aprons. The kids run screaming into the pantry. The kids are looking everywhere to find them. They smash things, dig through food and generally wreck the pantry looking for their aprons. With them on, they head to their stations for their first Mystery Box challenge.

They are limited to what’s under the boxes to make a restaurant quality dish. The winner gets a huge advantage in the next challenge. They open the boxes, Riley can’t even be seen over his because he’s so tiny. In the #MCJMysteryBox the kids find salmon, mango, broccolini, corn, soy sauce, puff pastry and tomatillos. They also get a staple pantry box with milk, eggs and flour. The kids are excited and they have an hour starting now. Riley runs off the wrong way and the judges laugh.

The kids are all aged 8 to 13 and are from all across the US. Gordon says he wants to see flair and is hoping to see a few desserts. Joe is looking for personality. Kayla is a fifth grader who likes baking and is making a mango turnover. Nathan is making a mango Napoleon. He says he’s confident. AJ is making salmon curry. Riley tells Gordon he’s the youngest and tiniest they’ve ever had and he speaks German, English and a little French. He tells Gordon what he’s cooking in French.

Jenna is making coconut rice pudding and a mango compote. She says she wants to be a food critic. Jack, from Chicago, is making broiled salmon with a Thai inspired sauce. Graham tells him it’s very ambitious and encourages him to taste as he cooks. Kayla cuts herself and has to call for a medic. She’s crying and Gordon comes over and says she’ll be fine and encourages her to keep going. She gets checked out and bandaged by the medics who tell her it’s pretty deep and she actually cut two fingers.

She says she wants to keep going, dries her tears and Gordon gives her a kind word. She’s back at it with just a few minutes left. He tells her she’s broken an MC record cutting two fingers at once. They are down to seven minutes and Graham says he likes Jack’s flavors. Riley is also doing salmon and Gordon says the kid is just eight. They are down to their last minute. They are down to 10 seconds and Gordon counts them down then calls hands in the air.

The judges go around inspecting the final dishes and choose three standouts to taste down front. Gordon calls down Jenna with her coconut rice pudding with mango mint compote. Gordon says it looks amazing. Gordon says he loves rice pudding and grew up on it. He tastes and says he wants to eat more of it, so he does. He says it’s rich and creamy and says it’s OMFG (oh my food good). She thought he was going to curse and says he has a track record of potty mouth and the kids giggle.

Joe tastes it and says it’s excellent. He says the mango is a bit overcooked but it’s tart and sweet. He takes the dessert with him to polish it off. Graham calls down Jack. He made broiled salmon wrapped in Swiss chard. Graham says it has more technique than they see in adult MasterChef. He says the salmon is perfect and says it just needs a smidge more salt. He says he pulled it off.

Joe calls down the final dish cooked by Kayla. She brings down her mango turnover with coconut crème anglaise. Jack says he doesn’t even know what that is. She says she lives on Long Island and cooks for her family. Joe says the turnover is crispy and light and the anglaise is excellent. Gordon says it’s light, crisp and delicious. He says there is a little too much pastry to filling but otherwise is very good. The other kids applaud them.

The judges talk to decide which of the three won it. Gordon tells the kids they have a dilemma and says it’s hard to pick among them. He says the best dish was Jenna’s and Jack’s and Kayla’s. The kids are floored. Gordon says it’s so close they couldn’t decide and says all three get to come to the pantry to get the advantage. He tells them well done. They head to the pantry with the judges. They see ravioli, lasagne and pappardelle. The kids talk to decide what should be assigned.

They don’t have to cook at all and decide to choose a more challenging pasta. They decide on their item. Jenna, Jack and Kayla are upstairs eating ice cream sundaes while the judges tell them they chose for everyone else to cook pappardelle. Graham says they can make any version of it with any sauce but have to make the pasta from scratch. Andrew has never made fresh pasta and is scared. Gordon says they’ll say goodbye to at least one home cook – they have an hour. The kids run to the pantry to get their ingredients for the #PastaChallenge.

Ryan Kate says she makes fresh pasta all the time, but has never made pappardelle. Quincy has also never made pasta from scratch. The kids scramble back with ingredients. Joe says it’s amazing to see these young kids making homemade pasta and Gordon says this is a very grown up challenge. Gordon says it’s four ounces of flour to one egg and olive oil. You have to work the pasta to a perfect texture. Graham checks on AJ who says she’s Italian, makes pasta and has made pappardelle before.

Parker is making a spicy sausage with tomato sauce. Quincy is making tomato basil sauce for his pasta. Ryan Kate talks to Joe and he says her pasta is thin. She says she was going to double it to break up the gluten and he’s very impressed and calls her a food scientist. They are down to 20 minutes left in the challenge. Parker panics because he burned his sausage. The kids upstairs don’t think Parker is going to get done but they say they hope everyone does.

Gordon goes over to help Parker make a recovery. He shows him how to salvage the dish and gets him calmed down. He reminds Parker to taste everything. They are down to 15 minutes. Andrew is making a bacon crème sauce for his pasta. Jimmy is making vodka no vodka sauce. Graham gives him a couple of tips and then moves on. Graham tells the other judges it’s doing great. Graham says Ryan Kate’s looks amazing and says Parker has bounced back.

Graham says Jimmy is flustered and doesn’t think he’s going to get done. They are down to the last minute of the challenge and Gordon tells them to start plating. Graham calls out to add garnish and seasoning. They count down from 10. Andrew is first down with his bacon crème sauce pappardelle. He says he cooks three meals a day for his family of four and he’s just 11. Gordon says they dish is delicious and the pasta is perfect. He says he also likes the plating technique.

Joe tastes and says it’s as good as pasta served in many restaurants. Joe says it’s one of the best MC Junior pasta dishes he’s ever tasted. Next is Riley. Jenna thinks Riley is going to do great. He made tomato shallot sauce on the pappardalle. Graham tastes and says it’s perfectly cooked and the sauce is rich and seasoned perfectly. Graham says it’s really good and tasty and offers him a high five. The bigger kids all applaud him.

AJ says she became a better chef than her parents at age six. She made Mexican tomato sauce for her pappardalle. Joe tastes and says the pasta is uneven and says there are a lot of flavors in there. He isn’t sure about the fusion of flavors and says it can cause confusion. Jimmy is next and he brings down his dish – he’s worried. He made vodka sausage pasta. Gordon tastes and says it’s absolutely delicious. He says the sausage is great, sauce is rich and seasonings are beautiful. He tells him it shows finesse.

Next is Jianna – a Texas pageant girl who cooks as her pageant talent. She made pesto pappardalle. Graham tastes and says it’s really ambitious. He says the pasta isn’t consistently cooked and says the sauce is tasty but there’s not enough of it. Quincy made basic tomato sauce for his pasta. Gordon tastes and says the sauce is delicious, too spicy but the pasta is overcooked and mushy. Parker is up next and made spicy sausage pappardalle.

Gordon calls down the three from the balcony back to their stations. Gordon says they are sending some kid chefs home and says the kids can talk while the judges meet. The kids talk and sample their dishes. The judges are back and tell the kids to come down if their name is called. Joe calls Philly, Jimmy, Jianna, Quincy, Ryan Kate, AJ, Andrew and Parker. Gordon says there are three phenomenal dishes and these are front runners – Jimmy, Ryan Kate and Andrew are acknowledged as the tops.

Gordon says their dishes were stunning and he sends them back to their challenge. Jimmy is floored that he won and Andrew is excited. Ryan Kate is also thrilled. That leaves five kids down front – Philly, Quincy, AJ, Parker and Jianna. He tells all five they did well but are going home. Gordon says they are great chefs and get to keep their aprons. That takes it down to just 14 home cooks. Poor Jianna is bawling and AJ says she’s sad to say goodbye to her new friends.