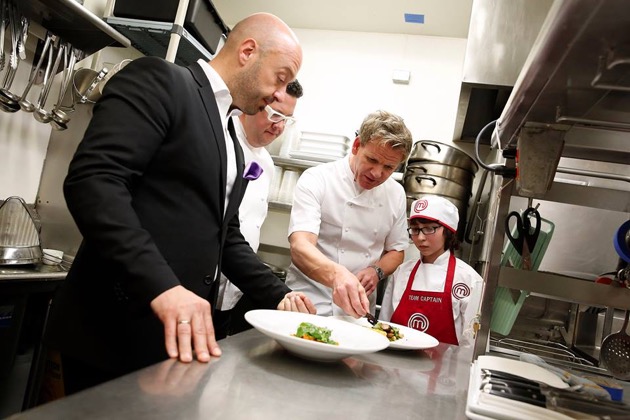 Tonight on FOX Gordon Ramsay’s Masterchef Junior continues with a new Tuesday February 10, season 3 episode 6 called “Restaurant Takeover,” and we have your weekly recap below. On tonight’s episode, a Los Angeles restaurant is taken over by the six remaining contestants, who split into two teams for one of the biggest challenges of the season.

On the last episode, in the next mystery box challenge, the eight remaining junior home cooks created unique banana dishes. The junior home cook who most impressed the judges won a significant advantage in the next elimination challenge. Later, special guest and Gordon Ramsay’s daughter, Matilda Ramsay, introduced the home cooks to their next elimination challenge dish, a Ramsay family favorite, Salmon en Croute. Did you watch the last episode? If you missed it, we have a full and detailed recap right here for you.

On tonight’s episode as per the Fox synopsis, “in one of the toughest challenges of the season, the six remaining junior home cooks face the restaurant takeover challenge. The contestants will split into two teams and take over a real Los Angeles restaurant. Find out which team is victorious and who will advance to the Top 4.”

Don’t forget to join us for our live recap tonight at 8:00pm when MasterChef Junior Season 3 episode 6 airs on Fox. While you wait for the recap, let us know how you are enjoying this season of MasterChef.

On #MasterChefJunior, we’re down to the top six kid chefs of the season. Tonight is the big challenge of the restaurant takeover. The judges come in, then the top six kids who are all 11 and up. Graham welcomes the #MCJFinal6 and talks about the cash prize and the trophy. They take the kids out to check out the restaurant they’ll be running. They walk down the streets of LA to Comme Ca, a fancy LA eatery.

Gordon says they’ll be in charge. Andrew and Jimmy get to be team captains for their performance in the last challenge. Andrew picks first and chooses Nathan. Jimmy picks Ayla. Andrew then takes Jenna which leaves Jimmy with Kayla. So it’s Andrew, Nathan and Jenna versus Jimmy, Ayla and Kayla. They put on their aprons then go get a demo from the chefs. They have to make octopus and ravioli appetizers then skate wing and flat iron skate for the entrees.

Executive Chef Brian Howard demonstrates the signature dishes. He goes through cooking and plating of the appetizers and entrees and answers questions from the kids. The kids watch and take notes. The kids get just one hour to prep and are also told they have to serve a VIP table of the executive chefs from Comme Ca. Gordon tells them he’ll be expediting and says their age won’t matter to him. Their one hour prep starts now.

The #RestaurantTakeover is on. Jimmy quickly delegates after seeking input. Andrew is bossier. Andrew says he runs the team, the team doesn’t run him. The dining room fills up with diners who have no idea their dinner is being cooked by kids. Jimmy tells Gordon that his team is in sync and won’t be fighting. They are in harmony. But Andrew is aggravating his team. He’s yelling and being insulting but they’re trying to work out the kinks. He’s totally channeling Gordon. Jenna gets burned and cries.

They call over the medic and Nathan says they have to start working as a team. She tries to calm down and push through. She tells Gordon she’s perfect. The orders start coming into the kitchen and Gordon starts calling tickets. Andrew says it’s so fast and his head is exploding. Gordon is yelling now and Kayla starts to stress out. The blue team is getting their apps out but the red team is lagging. Gordon yells at the red team and tells them to listen. Ayla is struggling to hear what he’s saying.

Jenna is struggling with chickpea cakes and Andrew yells at her to redo them. She keeps burning them. The red team then struggles with plating when Gordon spots slop on the bottom of a plate. Jimmy gets frustrated. Gordon yells at him to wipe his bench and calls it a pig sty. Andrew’s team is still not in sync and he’s yelling. Andrew nearly starts a kitchen fire and Gordon is having a mini-meltdown himself. Uh-oh. Gordon calls Andrew over and asks what’s the matter with him.

He tells him to step out and get some fresh air. Andrew blew on a fire which made it flame higher. He goes out, regroups and heads back inside. Gordon calls them all over and asks Andrew if he needs to let Nathan take over. Gordon tells Andrew he’s just showing off by screaming and tells him to get it together. The red team has gotten into the groove and are delivering appetizer plates. Jimmy is feeling confident. There are just a few appetizer orders left.

Joe goes to ask about the appetizers. The red team gets positive feedback on both apps. The blue team gets good news on the octopus but the ravioli was cold and chewy. Now they’re serving up the appetizers for the executive chef team. The blue team lags on Jenna’s burned cakes. Andrew starts yelling again and Gordon reminds them these are the VIP tickets and they’re out of chickpeas. Now they have to prepare for entree service.

Danny Waked and Brian Howard, the executive chefs, taste the appetizers. Both seem to get good feedback on the ravioli. They notice the blue team left out the panisse because they ran out. The blue team gets a bit of negative feedback. In the kitchen, the teams ramp up for entree service. Ayla is cooking steaks but has no clue about how to judge them. Graham is offering cook tips to the teams. Andrew decides to lead in a different way since the other way was not working.

They are finally in sync and operating in unity. Over at the red team, they’re struggling. Gordon checks steaks and calls the red team over. He says the skate wing is raw and so is the steak. Gordon tells them all three to take their aprons off and stop now. He asks if they’ve all just given up.

They tell Gordon they’re not done and he asks them to start again. Jenna sets a skate wing on fire and Graham has to step in to show her how to stop the flames. Nathan is worried she’s dragging the team down and Andrew pushes her to refire and focus. Kayla is stressing and Jimmy tries to get them back on the same page. Over on blue, Andrew is falling behind on his beans. They have to send the skate wing without the green beans with an apology.

Joe checks on the entree and red team gets thumbs up on the fish but the steak is a little undercooked. The sides get raves. Then Joe checks on the blue team and hears the skate is salty but the steak is good. Red team customers are impatient when their entrees are delayed. Joe says he has a table ready to walk out. Kayla says she’ll never complain in a restaurant again about slow service. A red table gets up and leaves and Gordon yells at Jimmy’s team to pick it up.

The teams serve their last tables and Gordon tells them to get working on clean up. The executives chef are now served their entrees. The blue team gets kudos on the skate while the red team’s fish is raw and Brian won’t even try it. Now it’s the steaks. The blue team’s comes out too rare while the red team gets a good seat on theirs. So it looks kind of balanced on the entrees. The customers are filling out their comment cards. They still have no idea that kids cooked for them.

Graham, Gordon and Joe come out and thank the diners for their patience. Gordon asks if they want to meet their home cooks and bring out the kids. The audience loves it. They are totally shocked kids cooked their meals. Graham tells them it’s MC Junior and Kayla apologizes for some dishes coming out late. The diners get to do Q&A and they ask the kids what it’s like to be in the kitchen with Gordon – the kids say: horrifying, stressful and nightmare.

Gordon tells them only one team can win and will be safe from elimination. Instead of announcing it, Gordon sets up a major cliff hanger and says they’ll announce it back at the MC Kitchen since it’s too close to call right now. Jimmy thinks they have a lock since they didn’t argue but Andrew thinks the blue team had better food. Back in the kitchen, the judges call the kids down to give them the takeover challenge results.

Graham tells them they did an amazing job and better than a lot of the adult home cooks. Andrew admits they had some bumps in the road and Jimmy says they shined more in apps, but did a good job. Gordon says the blue team got off to a dreadful start with no team spirit. He tells Andrew being a leader isn’t just about shouting. He also tells Nathan he could have come out of his shell. Then he tells them they had a strong finish.

Gordon says the red team was calmer but had issues. He mentions Jimmy’s dirty plates and says Kayla didn’t seem like she was in the game at times. Gordon says one team did slightly better than the other and announces that the winning team is safe from elimination. He says the blue team won it. Gordon tells the red team it was a tough challenge. He sends the blue team upstairs and tells them they’re moving on. Gordon tells the red team that one of them will be safe and will move on.

Graham says they’re saving Jimmy. He says they all agree that he was performing at a higher level. They tell him to say goodbye to the girls and head upstairs. Jimmy’s upset that his two best friends are going home. Gordon encourages the girls to keep cooking and says they both did a great job tonight and in the competition. The girls go get hugs from the judges before they leave. Kayla says she thinks Jimmy will win while Ayla says she thinks Nathan is going to win it.