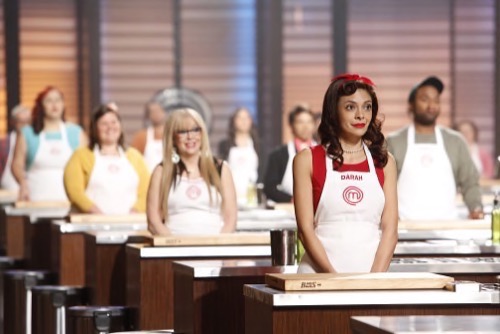 Tonight on FOX Masterchef returns with an all new Wednesday May 27, season 6 episode 2 called, “You’re the Apple of My Eye,” and we have your weekly recap below. On tonight’s episode a mystery-box challenge finds the top 22 chefs using 20 common ingredients to prepare a dish for the judges, and the winner gets a leg up in the first pressure test of making apple pies.

On the last episode, in the season premiere episode, 40 of the best home cooks in America traveled to Los Angeles to present their signature dishes to the distinguished judging panel: Gordon Ramsay, Graham Elliot and new judge Christina Tosi. The judges tasted for flavor, creativity and presentation. In order to move to the next round, the home cooks had an immense passion for food and be determined to out-cook their rivals in a series of head-to-head battles to earn a coveted white apron and competed for a chance to win the MASTERCHEF title, a cookbook deal and the $250,000 grand prize. Did you watch the last episode? If you missed it, we have a full and detailed recap right here for you.

On tonight’s episode per say the FOX synopsis “after the Battle for the Apron concludes, the Top 22 home cooks in America will face their first Mystery Box Challenge. Each contestant is given 20 staple ingredients that anyone could find in their home and tasked with preparing a dish for the judges — were the judges to show up at their homes for dinner. The winner of the Mystery Box Challenge will receive a significant advantage in the season’s first pressure test, during which contestants must make their versions of an apple pie.”

#MasterChef begins with a look back at last week that began with the 40 home chefs. Gordon Ramsay, Graham Elliot and Christina Tosi. Tonight we start with 22 home cooks but at least two will be sent home tonight. The cooks come in happy to be at the next stage. Among them are a heating and air guy, a hairdresser, drummer and a secretary.

The competition officially begins tonight with a mystery box challenge. The #MCMysteryBox will give a huge advantage to the winner. Under the boxes are different ingredients. It is stuff from their own refrigerators from their homes. Christina says they want to get to know them through their food and says they have to prove they deserve to keep their aprons. They have just one hour.

The judges talk about the eclectic backgrounds as they watch the home cooks work. Gordon asks Christina what she thinks about her first mystery box and she says she’s so excited. Gordon chats with Hetal who is making coconut curry soup and he asks about protein. She says most of her culture don’t eat meat. He reminds her she will have to cook protein later. Derrick is making pan seared salmon.

Christine chats up Dan who is making savory eclairs. Graham is there too and they wish him luck. Katrina tells Gordon she’s making pork tenderloin schnitzel. He tastes and says it’s delicious. Gordon asks why she just came this year and she says she didn’t have the confidence to come before and he says he’s glad she’s there and loves what she’s preparing.

They are down to 10 minutes and everyone is sweating it. Gordon says he likes Katrina’s dish and Graham is interested in Dan’s dish. They are down to their last minute and they tell them to plate, garnish and wipe and to do it fast. Gordon counts down from 10 and it’s hands off. The judges go to take one last walk through before they choose the three dishes to taste.

Gordon says the first cook stuck to their roots and calls down Katrina with her schnitzel. She curses, giggles then brings down her dish. She says it has braised red cabbage, bacon and Christmas peas. Gordon asks about her cooking technique then tastes and says the pork could use 30 seconds less but the rest of it is perfect. He says he feels like Christmas and says great job.

Christina tastes and says the cabbage is perfectly balanced. She likes the schnitzel and says it could use a little more color in the breading. Graham tastes and says he loves it and it’s delicious. He says he likes that she has her heritage on the plate. Christina then calls up Dan with his savory eclairs with creamy mushroom filling and two sauces – basil and tomato.

Christina says the filling should be fluffy and not underfilled. She says it’s totally right or wrong. She cuts into it and says he got it right. She tastes and says she’s impressed by the sweet and savory. She says the risk paid off and tells the others to watch out. Gordon is next and says it’s gallant and thoughtful and really delicious even though it’s a bit too much cream for him.

Graham then calls down Hetal and praises her creativity. It’s a coconut curry soup with chutney on top with basil oil. Graham tastes and says holy sh-t, that’s so good. He says it’s perfectly balanced and says it shows flavor control but could throw in some lentils. Gordon is next and says it’s so flavorful with so few ingredients. She says her husband loves coconut based soups. He says he’d come home early for it.

Gordon says all three dishes were great but there can only be one winner. Gordon says the winner is Dan who they then take into the pantry to discuss the elimination test. Graham says Dan doesn’t have to cook in the test. Then Gordon shows him the desserts on display and says Christina made them all. Gordon says she’s a revered pastry chef. She says she was raised by women who loved to bake.

Christina says she went to culinary school then worked her way up to open her own place. She says they make crazy pies, cookies and layer cakes in her NYC bakery. She says every home cook should know how to make a perfect apple pie. She says it’s the true American classic. She shows a slice and explains what makes it perfect. They tell Dan to fill a bag with apples.

They come back out of the pantry. Gordon carries the cloche and Christina says they have to bake. Gordon removes the cloche and shows the #ApplePie. Gordon says Dan doesn’t have to cook and he also got to pick apples – these will determine who has to bake and who doesn’t. He hands an apple to some people then teases others before he hands them out.

Gordon says all those with an apple get to go to the balcony. There are nine baking to avoid elimination and two will go home. They have just 90 minutes to make the homemade apple pie. The clock starts and they’re scrambling. They run to the pantry to gather ingredients. Veronica is pleased since she’s made tons of pies.

Christina says you can either bake an apple pie or you can’t. She says the crust is critical then you have to season the apples perfectly. She says the crust thickness will be a struggle for people. Derrick is making a simple Granny Smith pie with a bourbon whipped cream. Brianna is using two types of apples with mint and ginger. Stephen is making a crumb hat for his.

Christina talks to Veronica who is making a double crust apple pie. She tells Veronica it’s a risk. Olivia tells Gordon she’s not sure if she’s making a crust for her pie. He reminds her that Christina asked for apple pie and he implies that means a crust on it. Olivia pushes back and says “I’ve got to do me.” Then she admits that a tart doesn’t have a crust.

Olivia is blending blueberries into her apple pie along with goat cheese. Gordon wishes her luck. Mateo the teacher is making a ginger, cardomom and lemon zest pie. Graham says those spices can really get concentrated but Mateo is confident. They tell the cooks to get their pies into the oven. Graham says Christopher’s pie looks good and Gordon says Charlie cut the apples too big.

Gordon says Sarah seems very confident. Christina says every pie is different that’s being baked today. The pies start to come out of the ovens. They are down to one minute. They count down from 10. The pie challenge is ready for judging! Gordon starts with Veronica. She says it’s not her prettiest but she knows the flavors are there. She gets tongue tied and Gordon laughs at her.

He borrows her glasses and looks at it. He says it does not look like a simple apple pie. She says it’s a caramel walnut apple pie. He cuts a slice and checks it out. She says she rolled graham crackers into the pastry dough. Gordon says that pie is delicious. He says it looks a mess but tastes delicious. Christina tastes and says that pie is great. Veronica bounces in joy.

She says it’s a beautiful cross section of pie and says she clearly knows how to roll out a crust. Graham tastes and says he likes the cook on the apple and says it tastes 10 times better than it looks and says he would eat another slice. Next is Christopher. He’s nervous because he’s never made an applie pie before. It’s a maple syrup and bourbon filling in his pie.

Graham calls down Olivia. She’s very upset and says this pie was not what she wanted. She says it’s a goat cheese, apple and blueberry pie. Graham says it’s really tasty except for the goat cheese. Christina also doesn’t like the goat cheese. Derrick is next and he has a wide lattice pie and Gordon cuts then tastes. He says it’s delicious, fragrant and good pastry. He says he just needs more apples.

Stephen is next and made mixed apples with marscapone and caramel. Christina says the balance of flavors is good. She says the problem is that the crust wasn’t baked long enough. Charlie is next. He made a granny smith apple pie. Graham says it looks charming and rustic. He says filling is good, crust is great, but technique isn’t there.

Mateo is next and he made a ginger apple pie with salted caramel glaze. It came out crazy because the apples are way too thick and the pastry is too thin so it fell apart. Gordon says – damn. Christina tastes and says the ginger is too much for her. She says it’s all about everything except for the apples. Next up is Sarah. She has a huge pie. She says every Fall they make a pecan apple pie with caramel.

Then Graham says it’s time for the three worst. Brianna, Olivia and Mateo. Graham says Mateo is going home. He thanks them for the opportunity. Gordon says Olivia cooks in a confused manner. He says both Olivia and Brianna both failed on the pie. He calls Olivia forward and then says she’s staying. Brianna is sent home!