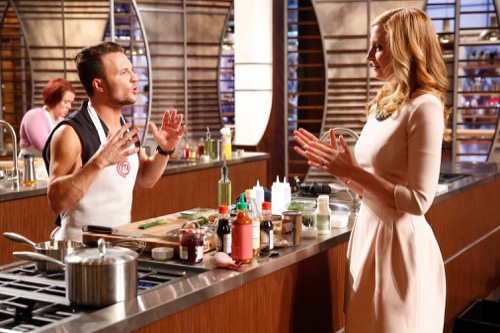 Tonight on FOX Masterchef returns with an all new Wednesday July 15, Season 6 Episode 9 called, “Rice Rice Baby.”  We’ve got your recap down below! On tonight’s episode a rice dish is created in 60 minutes in a mystery box challenge, and the winner will be featured in Family Circle magazine and gets to skip the next elimination challenge, which involves preparing dishes based on two dynamic ingredients.

On the last episode, in the next challenge, the remaining home cooked will learn from the best as they enter a special taste-it-and-make-it challenge. Each contestant must recreated Gordon Ramsay’s signature Beef Wellington. The home cooks with the worst dishes competed in the next pressure test, featuring another Gordon Ramsay dish – scallops with puree of English peas, bacon and quail eggs, finished with shaved truffles. Find out who kept up with the master and who was sent home for good. Did you watch the last episode? If you missed it, we have a full and detailed recap right here for you.

On tonight’s episode per the FOX synopsis “in the next mystery box challenge, the remaining home cooks will be faced with an assortment of rice. Each contestant must create a rice dish in 60 minutes. The contestant with the winning dish will be featured in Family Circle Magazine and will not have to participate in the next elimination challenge. Then, in the elimination challenge, contestants will be tasked with creating dishes based on dynamic duo ingredients. Find out who will make it into the Top 10 best home cooks in America and who will leave.”

#MasterChef starts with Tommy talking about how he wants to win a Mystery Box challenge. Derrick is confident of his chances since he won one before. Christina says this is not the time to relax but to focus. Graham says the #MCMysteryBox ingredients will be used to make a delicious dish – they reveal and rice comes tumbling out everywhere. Hetal is thrilled to see this since her family were farmers in India. Gordon says they get that plus a limited pantry to make a rice dish that shines.

Christina says it must also look amazing because it will be featured in Family Circle magazine in September 2015. She says 17 million people will see their recipe. The judges talk about how every culture uses rice. Tommy is making dirty rice jambalaya. Shelly is making curry and coconut rice from her Jamaican roots. Hetal is making an Indian dish and says it’s comfort food from where she’s from. Gordon sniffs and says it smells good.

Christopher is making pineapple fried rice. Claudia is making a Jasmine rice dish with Mexican roots. Derrick is making a sushi roll with rice and quail eggs. It’s down to 10 seconds and everyone is plating their creations. The judges then go to inspect all the dishes to decide which are the top three they want to taste. The winner will then get an advantage. Gordon calls up Hetal. She says it’s Khichdi which is rice porridge with veggies and almonds. She says it’s the first thing you feed a baby.

Gordon says it’s classic and really her and says it tastes expensive and says it tastes like it came from her mother’s kitchen. Graham says the balance of spices is nice. Christina says it’s stunning and the rice is showcased. Graham then calls down Tommy. He made andouille sausage, shrimp and chicken jambalaya and says his Aunt Lorraine made everything in a cast iron skillet. He used green bamboo rice Graham tastes and says it’s beautiful and yummy and him on a plate.

Gordon tells him to focus on the food and keep cooking like this. Christina then calls up Claudia. Derrick is very upset he wasn’t chosen. Arroz con leche molotes with custard and orange marmalade. She used jasmine rice. Christina says it’s delicious. Graham loves it so much that he comes to dance with her. Christina says these three dishes were all so incredible. They announce that Tommy is the mystery box winner. They take Tommy into the pantry to give him his advantage.

They ask Tommy about his marriage then say he’ll get a choice of married flavors. Christina reveals her favorite flavor combo as peanut butter and jelly. Graham says he likes something more exotic and reveals ham and pineapple. Gordon says his are more sophisticated and European and shows tomato and basil. They come back out of the pantry and he heads upstairs and flounces as he goes. Gordon says Tommy has a guaranteed spot in the top 10.

Christina says he got to pick between three flavor combos and then they show he chose peanut butter and jelly. Christina then tells Tommy he can do a #DoubleSave. He can save one person before the cooking starts and one person after the cooking stops. He chooses Claudia but she turns it down and says she wants to cook. Shelly thinks she’s crazy. She says when someone gives you a helping hand, you take it and says thank you. He doesn’t get to choose a replacement.

They have one hour and go off and running. Katrina is making chicken satay and a spring roll. Shelly went to the pantry and forgot to get her PB&J. She goes looking for Nick to see if he’ll help her out. He says he has none to spare. She’s pretty much hosed.

He was making a peanut butter and jelly tart and Christina asks why he looks so defeated. It’s hands up and now Tommy gets to choose someone to save from judging. He chooses Nick and says it doesn’t look up to par tonight. Nick says he’ll take it and heads upstairs. Nick thinks there were people that needed the help more but he won’t be prideful. He goes up and picks up Tommy in a big bear hug. First up is Claudia who is really nervous.

She regrets not taking the pass. She says she just wants to earn everything she gets in life. She made peanut crusted pork chop on a grape jelly glazed Brusells sprout. Gordon cuts into it and says it’s cooked beautifully. He asks about the glaze and she says it’s vinegar and jelly. Gordon says overall it’s very good and says her balls are getting bigger by the minute. Graham says the pork is perfect. Christopher is next.

He made a raspberry and peanut butter tart. She says the edge is thin and well baked. She cuts into it and says the pastry is even. She tastes and says he got a good nutty essence and says she likes it and it was beautifully done. She says she’s proud of him and shakes his hand. Shelly is next and she made PB&J five spice spring roll with dipping sauce. Gordon says it looks like a stuffed condom. He taste and says ground beef and strawberries don’t go together.

Gordon chews her out and says it’s bland and she missed the point. Graham tastes and says the tart shell is thick and under-cooked. He says he’s not a fan of this either. The judges go talk and it seems to be between Shelly and Sara. Christina says the two stand out dishes were Hetal and Katrina. They will be captains in the next team competition. Graham says they will call down the bottom two – Sara and Shelly. Gordon announces that Sara is going him – it’s all because she sassed him. Gordon asks who she thinks will win it all and she says Derrick.