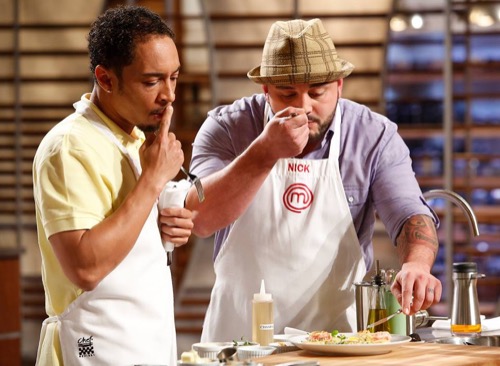 Tonight on FOX Masterchef returns with an all new Wednesday July 8, Season 6 Episode 8 called, “Gordon’s Greatest Hits.”  We’ve got your recap down below! On tonight’s episode Beef Wellington is prepared after the contestants taste Gordon’s signature dish, but the contestants with the worst re-creations compete in the next pressure test, which involves a recipe for scallops with a puree of English peas, bacon and quail eggs, and finished with shaved truffles.

On the last episode, in the next team challenge, the remaining home cooks celebrated a MASTERCHEF milestone, the 100th episode! Each team prepared a two-course menu for the 100th episode celebration, during which VIP guests dined on oyster and caviar appetizers and a duck breast entrée, followed by a special surprise dish by judge Christina Tosi. The losing team faced the next pressure test, in which contestants had to create a three-layer birthday cake. Did you watch the last episode? If you missed it, we have a full and detailed recap right here for you.

On tonight’s episode per the FOX synopsis “in the next challenge, the remaining home cooks will learn from the best as they enter a special taste-it-and-make-it challenge. Each contestant must recreate Gordon Ramsay’s signature Beef Wellington. The home cooks with the worst dishes will compete in the next pressure test, featuring another Gordon Ramsay dish – scallops with puree of English peas, bacon and quail eggs, finished with shaved truffles. Find out who can keep up with the master and who will be sent home for good.”

#MasterChef begins with the top 12 coming into the kitchen. Graham says they deserve a treat and will deserve a dinner in the MasterChef restaurant prepared by Gordon. He says he made them beef wellington with potato and carrots. He says their next carrots will be to recreate the #RamsayDinner. They head into the restaurant to dine. Derrick says cooking his signature dish is so much pressure.

Hetal is icked out and she asks Chris questions about it so she can try and make the dish. He tells her about the technique. Everyone else empties their plate. Christina says to try and replicate. Graham says they have everything they need at their stations and they will cook next to the person they ate with and they have just 60 minutes to make the dish.

Graham talks to Hetal who says she touched everything to get an idea of what she needed to do. Gordon goes to check on Stephen and they talk then bro high five. Everyone seems lost. Katrina is freaking and has holes in her pastry. Gordon runs over to look at it, but it’s too late. He tells her it’s a damned shame. He tells her to make sure everything else is spectacular.

Christina comes to check on Nick and he’s feeling good. They are down to 90 seconds and the judges yell at them to start plating. It’s hands off. Graham then says not everyone will get to bring up their dish and says they were forming teams. He says they will taste one per pair. The two worst teams will have to face an even harder Ramsay dish.

The teams talk about their dishes. They make their choices. Stephen and Sara bring down his. She says his looked better. Gordon cuts into it and says it’s beautiful and elegant. He tastes and Stephen says it’s f-ing good, right? Sara tells him to calm down. Gordon tells him it’s brilliant. They high five again. Graham says it’s awesome and also high fives him. He tells Sara she picked a good table to sit at.

Next is Hetal and Christopher. They chose Hetal’s wellington. Hetal says he didn’t get his sauce in his cup so they had to go with hers. Gordon sends him back to get his then asks why it’s so large and if it’s a sofa cushion. Gordon cuts into hers and says it’s cooked beautifully. He tastes and says it’s f-ing delicious. She’s stunned.

Christina then says Christopher doesn’t have the skill to match the way he runs his mouth. She then tells him that Hetal is carrying him in this challenge completely. Next is Derrick and Katrina. They served Derrick’s which is also large. It’s cooked a little over and the pastry is a bit loose. There is no mustard. Nick and Kerryy’s is next and the pastry is a bit thick and Nick also forgot mustard.

Shelly and Olivia are next. Christina cuts in and says the pastry is uneven and the steak is a bit overcooked and the carrots are overcooked. Tommy and Claudia are next. It’s hers. Graham cuts and shows it’s cooked perfectly. He tastes and says it’s delicious and perfectly seasoned. He says the mushrooms are nicely done and says it’s a nice example and she’s a real contender.

Gordon then calls everyone down to the front. He has Sara, Stephen, Claudia and Tommy go upstairs and says they’re safe. One other team will be safe of the three worst presentations. Shelly and Olivia are told they made mistakes, but are also safe. They send them up to the balcony. Nick and Kerry, Derrick and Katrina will face the pressure test.

Gordon tells them to watch while he demonstrates another signature dish. It’s a pan seared scallop with quail eggs and many other ingredients. Everyone applauds when it’s done. They have 30 minutes and no spare ingredients. This may be the most insane pressure test they’ve ever had on the show. Graham asks Kerry who has the least experience and he says it’s him and he’s struggling.

They are halfway done and everyone is panicking. The scallops seem to be hard. Gordon talks to Katrina who is near tears and he tries to bring her confidence back to the forefront and he gives her some tips and encourages her. Katrina breaks her yolk and Christina tells her to leave the one off that broke. Gordon tells them to work on the plating.

They are down to 90 seconds and Gordon is yelling at all of them to start plating. The four barely make it and Gordon says that’s what he calls a pressure test. Derrick says this is the most pressure he’s felt but he got all his components on the plate. Gordon tells him that the plate needs more peas. He cuts and says the scallop is cooked nicely. He tastes and says it’s cooked nicely.

He says he just didn’t rinse the scallop well enough and there’s a bit of grit. Graham checks out Katrina’s. He asks what happened and she says she forgot a few things. She forgot the truffles and he jokes with two eggs it’s like it’s looking at him. He tastes and says it doesn’t taste that great. He says the yolk isn’t runny and the scallop isn’t seasoned well.

Christina goes to Kerry and he says he’s missing more than he has. He says he didn’t everything on his plate. He has the bacon and scallops. She tastes and says the scallops is cooked well and the bacon is done nicely but too much isn’t there. She asks if he feels like his time is up. He says he should not be sent home. Gordon then goes to Nick and his plate looks good.

Gordon says it looks the closes to his demonstration. He says it’s fragrant. Then he tastes and says it was well done and it’s one of his best dishes and he’s seriously impressed. Gordon says the judges are going to talk. They come back out and ask Nick to step forward. They tell him he was inspirational and is stronger and evolving and send him upstairs. Gordon says one of the others is going home.

Gordon says this person struggled with the composition of their plate. He has Kerry step forward. Then he tells Katrina and Derrick they’re safe. Gordon tells Kerry that he’s always organized but his timing was his worst ingredient tonight. He sends him out and everyone applauds him and gives him a warm goodbye.