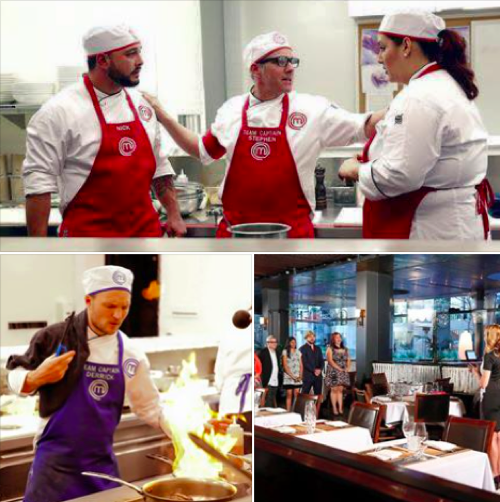 Tonight on FOX Masterchef returns with an all new Wednesday August 26, Season 6 Episode 16 called, “The Restaurant Takeover.”  We’ve got your recap down below! On tonight’s episode the Top 6 cooks split up into teams to take over a Los Angeles restaurant, where they prepare two appetizers and two entrées for dining customers. Later, the losing team take part in a pressure test that involves creating three different pasta dishes.

On the last episode, coffee is a main ingredient when the remaining cooks compete in the next mystery box challenge. Later, the contestants pair up for a pressure test to create an elaborate party platter. Did you watch the last episode? If you missed it we have a full and detailed recap, right here for you.

On tonight’s episode per the FOX synopsis “in the next team challenge, the Top Six home cooks will face the wildly popular restaurant takeover. Each team must complete two appetizer and two entree dishes for the dining guests in a downtown Los Angeles restaurant. The winning team will be safe from elimination, while the losing team must face the next pressure test, in which all members of the losing team must prep, cook and plate three different pasta dishes. Find out who can’t stand the heat of the restaurant kitchen and who will move on to the Top 5.”

#MasterChef starts with the final six home cooks at downtown LA’s Chaya, a Japanese fusion place that’s popular. It’s #MCRestaurantTakeover night. Stephen and Derrick will be team captains. Stephen chooses Nick. Derrick picks Katrina. Stephen picks Claudia since Hetal is vegan. That sends Hetal to Derrick’s team. He’s a bit worried. They meet the executive chef who is the inventor of tuna tartare. They have to make two appetizers and two entrees. The chef demonstrates how to make the dishes.

Gordon then says that he will be expediting the orders. That scares them all. Derrick divvies up the tasks to his team and tells them it’s all about communicating. Stephen takes on most of the tasks himself and leaves very little for Nick and Claudia. Nick is worried that Stephen has killed them by taking on too much. The diners start filing into the restaurant. Graham is back there working with the cooks and Christina brings back table tickets.

Gordon calls out the orders. Stephen realizes he’s taken on too much. Nick steps in to help him. Gordon yells at the red team. The blue team is feeling the pressure too. Hetal is moving to slowly and Derrick yells at her for not communicating. Gordon tells them to speed up. He asks Hetal why she’s not answering. Hetal freaks out and says she’s not used to people like Ramsay yelling at her. Derrick says this is a mess. Gordon bangs his head on the wall.

The guests are impatient for the long, long wait. They have been waiting for appetizers for an hour from the blue team. Christina comes back to ask what’s going on. Gordon calls the blue team over and says they need to get in sync and talk to each other. He says customers are getting pissed off. Derrick gives the girls instructions. The red team has plated some messed up tuna with too much mayo. Gordon says it looks like cat food and yells at Claudia and says she f-d it.

Claudia gets the red team back on track and the blue team starts to serve apps as well. Gordon praises the blue team’s efforts. Christina talks to the diners and gets positive feedback on both teams. Now they move on to the entrees. The blue team is boogying but the red team is struggling with timing difference between the fish and deer. Gordon keeps yelling at them. Nick says it’s taking too long. Gordon yells and curses at them. Stephen has overcooked the sea bass and has to restart.

The blue team entrees are flowing out but the red team is still stuck. Gordon screams and shows them the venison is overcooked and says it looks like a dog treat. He calls it sh-t and tells them to focus. Katrina is struggling with fish and Gordon says she can’t serve it. He asks who plated it and Katrina has to tell him she did it. He yells at her for overcooking. He says she’s sabotaging the team and asks Graham to step in and help them. Derrick is furious.

Graham coaches them on the cook and they finally get back in their groove. Christina gets more feedback and the red team is told there is a film of oil on their food. The red team is done with service first and Claudia says timing doesn’t matter, the reviews do. The blue team is struggling to serve their last few tables and Christina says they’re going to walk out. Gordon yells at them some more and says they may have walked out on them.

Gordon asks the blue team what was up with their communication. Derrick says they were doing good then it just felt apart and Katrina says it’s her fault for burning the fish. She’s very upset at herself and thinks if they lose, it’s her fault. Hetal says at least they didn’t send out burned fish. The judges will decide based on diner reviews plus what they saw in the kitchen. Nick worries they went too fast and didn’t plate well or served poor quality dishes.

They come back into the kitchen and Graham says they should be proud they survived the evening. Gordon tells them to go have a drink and relax while they think. He says it’s too close to call and they have to sleep on it. Next days, they head back into the Master Chef kitchen. Gordon says last night was challenging. He says the red team started chaotically then got better. Then he says the blue team froze like deer in the headlights at the end. Gordon says the reviews were clear though and congratulates the red team for their victory. They head up to the balcony.

Now the blue team has to face the pressure test. Christina says each will have to make one of their favorite dishes. She says this dish will measure a good home cook and a great chef. She says it’s pasta. Christina’s is manicotti with spinach ricotta filling and tomato sauce. Graham has squid ink pasta. Gordon’s is egg yolk ravioli in brown butter sauce. He says it’s the most challenging pasta in the world. They have to make all three dishes in just one hour.

Everyone is stunned by the time constraints. Nick says he can say as an Italian, it’s not possible to make those three dishes in that time. They scramble to get started. Gordon says this would be a struggle for any professional chef. Christina says it’s pasta first then the filling. Graham says there is a lot in his dish. Gordon says the key to his dish is really thin pasta. Gordon checks on Derrick and he says he’s made pasta a few times. Gordon says Derrick is always in the pressure test.

The #PastaCookOff is heating up. Katrina tells Graham she doesn’t know how to make the squid. Christina checks on Hetal and tells her to keep her eye on the clock. Katrina almost knocks her pasta press off on herself. Graham says she has no clue how to make the striped pasta. Stephen laughs at them. Christina points out that Hetal has added some strange filling to Gordon’s egg yolk pasta. Claudia calls down to Hetal that she should throw out the filling and she does.

Claudia tells Hetal to get some sauces cooking. Hetal says she can’t do the squid pasta and has to put up just two dishes. Nick can’t believe his eyes. Christina wonders what is going on with Hetal and says they’re not seeing what made her a contender. Katrina is talking to herself and seems stressed out. Derrick busted his egg yolk and Gordon says he cut them too small so the egg is leaking. Claudia encourages Hetal. They are plating now and Gordon says all three must be down there.

They go running and Hetal barely makes it there. Derrick says he did them in and thinks he nailed it. Christina goes to Derrick first and he says he made red win marinara and she cuts in and says the pasta is nice and thin. She says the filling is a little stingy. She tastes and says he nailed the pasta but the sauce needs a bit of salt but says it’s great. She moves to Katrina and says it looks like dinner time. She cuts in and says it’s nice even pasta and she nailed the filling.

Katrina says she’s never made it and Christina says it’s great and the seasoning is perfect on sauce and filling. Hetal’s is next and Christina says the filling is even but a bit under-filled. She tastes and says the filling needs more seasoning and the sauce is lackluster. Next up is Graham. He looks at Derrick’s and then digs in and says the scallops are good but the pasta is a bit undercooked. He tastes and says the seafood is beautiful and it’s a good job overall.

Gordon goes to Derrick’s egg yolk ravioli and says he could go home based on one thing. He asks what’s wrong. He put a raw sage leaf on it. Gordon tells Derrick to eat the sage leaf and Derrick apologizes. Gordon says it’s like eating an air freshener. Gordon cuts into the pasta and the yolk runs out like it should and he says the pasta is cooked beautifully. He says the brown butter is good. He moves to Katrina and says the ravioli looks beautiful.

Katrina says she put a dab of ricotta in it and he asks why and says no. He says with grains of ricotta the egg yolk doesn’t work. He cuts in and the egg yolk runs beautifully. Gordon says it was near perfect spoiled by the dab of cheese. He moves to Hetal’s dish and says it means water seeped through. He cuts into it and says it’s more than a 90 second cook and shows her that yolk coagulated. Plus she over-peppered. He tastes and says it was embarrassing.

Hetal still thinks she’s safe and that the other two made worse mistakes. The judges talk and Gordon says Derrick nailed two out of three and the sage leaf ruined the third. He says Katrina had two good, one underachievement. Then he tells Hetal she really felt the pressure and out of all three, she didn’t shine on any of them. He says Hetal is out of there. He sends Derrick and Katrina up to the balcony. They hug Hetal and go upstairs.

Gordon tells Hetal she made history as his favorite vegetarian. He asks her who will win and she says Katrina because she cooks with heart and love.