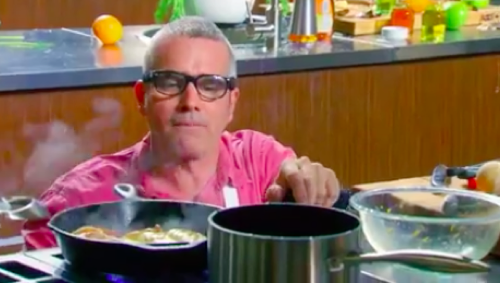 Tonight on FOX Masterchef returns with an all new Wednesday August 5, Season 6 Episode 13 called, “A Little Southern Flare.”  We’ve got your recap down below! On tonight’s episode the cooks prepare a flambé in a mystery box challenge, and the winner is safe from elimination and also gets to choose which Southern dish the contestants will make.

On the last episode, the Top 10 home cooks cooked family style when they faced their next team challenge and created family style meals for VIP diners. After each team prepared their family style meals, they were greeted by the dinner guests, their family members. Each diner voted for one team’s meal and the team with the most voted will be safe from the next pressure test. In the pressure test, the losing team home cooks had to create a gnocchi-in-brown-sage-butter-sauce dish. Find out who went home and who will moved on. Did you watch the last episode? If you missed it we have a full and detailed recap, right here for you.

On tonight’s episode per the FOX synopsis “in the next mystery box challenge, the remaining home cooks must prepare a flambé. The winner of the challenge will not only be safe from the next elimination challenge, but will also determine which Southern dish the contestants must make. The winner also will receive two other significant advantages. Find out whose cooking will go south and who will continue in the competition.”

#MasterChef starts with a mystery box tonight for the top 9. They home cooks head in and face the judges. The #MCMysteryBox contains booze. The three chefs demonstrate how to flambe. Christina is using cognac to make beef stroganoff. Graham has anise to make mussels with shallots. Gordon has apple brandy to make a shortbread dessert with caramel and peaches. Stephen says this makes him want to get creative.

Gordon says they need to make a stunning flambe dish in 45 minutes and they have a limited pantry to choose from. There is seafood, fresh fruits, veg and dairy. Christina says the winner gets a big advantage. Tommy says he’s glad he’s not the only thing flaming in this kitchen tonight. Gordon says the flaming sets the professional chefs apart from home cooks. Everyone is ready to step things up. Tommy is making bananas foster and Gordon says it’s back to his roots.

Graham chats up Stephen who is making sea bass that he will flambe with anise. Graham asks who the top three are and he says Derrick is big competition. Derrick tells Christina he’s making sea bass and is doing a pear flambe with bourbon. Katrina is making clams with bacon and did cognac flambe with fennel. They are down to he last 30 seconds and there are some panicked cooks. Christina says there are some good looking dishes. They count down and it’s hands off.

Gordon says they watch and taste everything and miss nothing. He says there are three dishes they are dying to try. He says this first dish has fruit and two flambe styles. He calls down Tommy and he says it’s Bananas Foster with maple and bourbon crème garnished with Granny Smith apples. Gordon says it’s so fragrant. He tastes and says it’s rich and he burned off the right amount of alcohol. Graham says it has great flavor. Christina says she’s happy to see this and says it’s humble flavors elevated.

Next Graham calls down Katrina. She made sea bass with seafood stew with clams, bacon, fennel and heavy cream. Graham digs in and takes a bite – he says she has made many tasty dishes and was an amazing team captain and keeps getting better. He says the cook on the fish is perfect. Gordon tastes and says it has rustic charm and he loves the fennel. He says it’s a punch of flavor and really delivered. She’s giggly and delighted.

Christina then calls down Stephen. He made sea bass with leeks, garlic and pecans. Christina tastes and says it’s darned delicious. She says he’s channeling confidence and knowledge. Gordon says he’s clever with the alcohol and it can use a touch more seasoning and says this dish highlights the best of what he can do. He and Gordon growl at each other like total bro’s. Then the judges talk about who will win the advantage.

They come back out and the judges reveal that Stephen chose chicken and waffles. Tommy says he’s a southern boy and loves chicken and waffles more than church loves sin. They have one hour to make. Stephen also hears that he gets to choose one person who has to make it in half the time. Stephen shows that he has a list of his toughest competition and knows Derrick is a tough competitor. He says he’ll take Derrick the little drummer boy for $30.

The #ChickenAndWaffles challenge starts now. Derrick has to sit for 30 minutes. Shelly says she makes this all the time. Graham says a lot could go wrong with this dish. Christina says if they don’t spray the waffle iron right, it’s gone. Gordon says if the oil gets too hot they can undercook the chicken. Nick is doing a Southwest version with spicy syrup. Claudia says she makes waffles often. Gordon checks on Tommy who is making duck fried chicken.

Katrina is doing miso fried chicken with scallion waffles. Derrick finally gets to start his dish. Gordon says the chicken takes 20-25 minutes to cook and he doesn’t think it’s possible. Stephen then heckles him from above. He says it’s like playing battleship with a kid so he can sink him. Christina says there will be a war. Stephen says the door is right there and Derrick growls loud at him like a dog and Stephen laughs.

Stephen says it will make him stronger and a better cook. Hetal tells Christina she used cornmeal in her waffle and Christina says this feels like her. She’s worried about the chicken. Shelly tells Gordon she’s redoing the waffle because the first was too brown. She has a couple of different pieces of chicken going and says she will choose the best. Graham checks on Derrick who says he’s fine. He made cayenne crust and has his waffle and is making a blackberry chili sauce. He says Stephen wasted his advantage.

Christina says Hetal’s waffle is delicious and she could win it if she pulls off her chicken. They mention that Shelly is failing and says it happens to people when a dish should be in their wheelhouse. They count down and it’s hands off. First up is Derrick and he’s a little nervous. Gordon asks how he feels that Stephen wants him to go home and Derrick says he will wear the target on his back like a cape and Stephen says he can use it to drive home.

Hetal is next and she says it looks good but doesn’t know how it will taste. She made a cornmeal waffle with onions and Indian spiced fried chicken. She made tenders and says the drumsticks take longer so she was playing it safe. Christina tastes and says it’s delicious. She says it’s great because it’s sweet, salty and spice. She says it better be in her cookbook if she wins this competition. Claudia is next. She made cayenne fried chicken with lemon and thyme waffle and citrus maple glaze.

Gordon says it looks terrible, like diner food. He cuts into it and says the chicken is pink on the inside. He says if you use a big thigh you have to put it into the oven when it comes out of the fryer. He says the waffle is horrible and limp, not crisp. He asks if she got lazy then asks if this is her at her best. She says if she had more time, it could have been better and Gordon asks how dare she when Derrick had half the time and did well. He says she’s at the back of the line.

Nick made southwest chicken and waffles with horseradish syrup. Graham says the chicken has a good flavor and it’s okay. Katrina made miso fried chicken with scallion waffles and a dipping sauce. Gordon tastes and says he’s disappointed and says the tenders are dry but the waffles are good, just not great. Olivia comes down and made honey soy chicken with sesame seeds and her waffle. Christina says the breast is dry and the waffle is just okay but she could have done a lot better.

Tommy is next and he made duck fat fried chicken with pecan waffle and tomato whiskey marmalade. Gordon asks about the duck fat and he says his grandma and aunt kept duck fat and it was saved. Gordon says the chicken is incredible and the waffles are in another league and says it’s one of his best dishes. Graham asks if he’s gone country then digs into a chicken leg and says it’s righteous stuff. He says the waffles are good and the marmalade jam needs to be put in a box and sold.

Last up is Shelly. She’s worried about her dish. She made classic chicken and waffles with bourbon maple syrup and vanilla waffle. Gordon sees she cut the chicken and she says she wanted to make sure it was done and he says it’s pink. He is upset she left cooked chicken on her bench and served him raw chicken. Gordon says the chicken is also bland and says the waffle has no flavor and she just threw strawberries on the side. Shelly says the pressure is getting to her.

The judges talk and say that Hetal and Tommy are the top two dishes and will be team captains in the next big challenge. Then Graham says there were two worst dishes and calls down Shelly and Claudia. Gordon tells Claudia she has the makings of a strong chef and he’s shocked to see her down there. Gordon says they brought Shelly back and he believed in her then says maybe he still does but she’s gone as far as she can. He sends Shelly home. She hugs Claudia and tells her to do this for the moms.

Gordon says she’s had a long journey and Shelly says this has been a blessing. She says she’s going to save her money and go to culinary school and teach people how to cook decent on food stamps. Gordon says that makes him happy and says she has a big heart. They all hug her. She says the defeat stings but says not many people can say they made top nine on MasterChef.