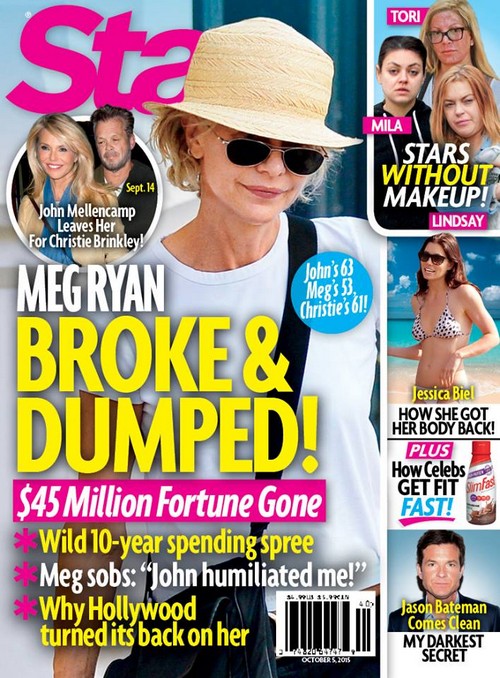 Looks like the one-time queen of romantic movies, Meg Ryan, can’t find love anywhere these days and, to make bad matters worse, she’s frittered away her millions and is close to penniless as well as loveless. According to The Star, Meg’s most recent love, rocker John Mellencamp, has dumped 53 year old Meg and moved on to other woman Christie Brinkley.

A source told the tabloid that photos of John Mellencamp out with the former supermodel stunned her and she sobbed, “I’m so humiliated. We were talking marriage.” According to source, Mellencamp never called it off with Meg before he moved on to Christie Brinkley, so her shock seems justified – especially since the two were caught on camera near Meg’s apartment.

And John Mellencamp cheating practically in Meg’s backyard is just the latest disappointment in Meg Ryan’s life. She has struggled to find work owing to a number of circumstances. Meg Ryan made it hard for studios to cast her as a likable lover in romantic comedies after she cheated on then-husband Dennis Quaid with co-star Russell Crowe and made many diva-level demands on movie sets.

Once the reigning queen of the rom-con, Meg’s movies began tanking at the box office and her desperate plastic surgeries made her look unlike herself and artificial. All of this makes her virtually uncastable as a female lead. And it wasn’t just on movie sets that Meg acted out. She’s reportedly impossible in many venues.

An unnamed Delta airlines flight attendant exclusively told Star that Meg Ryan was “drunk and difficult” in first class and that she was well-known among flight staff to be a nightmare to have on board. She told us that flight attendants would flip coins with the loser being forced to wait on the tipsy and demanding actress who would rant loudly if she was unhappy about service.

John Mellencamp moving on with Christie Brinkley makes this is the second high profile dumping Meg Ryan has been subjected to – Russell Crowe ditched her after she left Dennis Quaid to be with her reportedly because Crowe thought shagging Ryan while filming Proof of Life was a casual on-set fling but Meg wanted more and the Aussie actor walked away.

With her career dried up like the desert and her adopted daughter Daisy to support, the tabloid also reports that Meg is cash-strapped with nowhere to turn and no man in her life to bail her out financially. A source told the tab, “She’s making almost no money… she can’t keep up this lifestyle. It’s embarrassing.” Sound likes it!

Meg Ryan is so desperate for work that she’s poured her time and what’s left of her savings into starring and directing in the movie Ithaca and she even begged former leading man Tom Hanks to co-produce and make a cameo. Makes sense – if no one will cast you, cast yourself. Perhaps if she’d lay off the wonky fillers and Botox and embrace aging gracefully, she could get more work.

Look at Diane Keaton – no extreme surgery – quality acting work and still a romantic lead at more than a decade older than Meg Ryan. There’s a life lesson in there somewhere – but for now looks like Meg Ryan does not have mail – at least not from any casting agents…