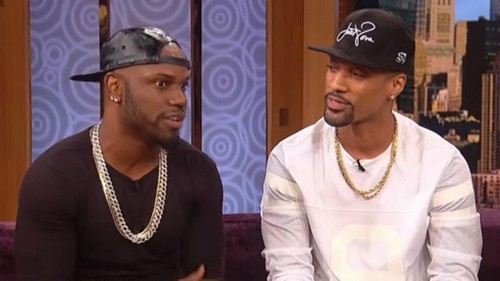 “Love & Hip Hop: Hollywood” star Milan Christopher has been spilling his guts all over Instagram since his very public split with Miles Brock. The reality star is angry at his on-again, off-again partner for being less than honest with his ex-girlfriend Amber on a recent episode of “LHHH.”

In an Instagram post from Milan, he posted a cartoon photo of a man with his heart ripped out. In the very melodramatic post, Christopher wrote, “”I hate allowing people to use me, I have being exploited, I hate not being real. I hate being human, I hate having a heart. I hate feeling like this.”

Miles Brock was in a relationship with Amber, who is now one of his best friends, for almost ten years. Of course their close friendship has always made MIlan Christopher uncomfortable but it wasn’t until Miles didn’t tell Amber the extent of his relationship with Milan that things fell apart.

Milan and Miles announced their split a couple weeks back but then decided to try again. The reconciliation didn’t last long and now the controversial couple are on the outs again.

When Miles Brock read some of the things Milan Christopher was posting about their relationship on Instagram, Miles posted a cryptic Instagram response of his own and threatened to expose his former lover if he didn’t stop. That post has been deleted but screenshots of the exchange were caught and shared.

Apparently Milan isn’t worried about skeletons though because the model is still putting details of their breakup all over social media. Christopher posted a screenshot of his tweets to Instagram with another explanation. The “LHHH” newbie’s caption read, “After All of the blogs, gossip sites and people hitting me up. I guess I owe you all an explanation and the truth. I just want to tell you all thank you for being so supportive even with my emotional journey and living my life out loud and infront of the world! Love you guys.”

One of the tweets pictured in the photo talked about how Miles Brock had cheated on Milan Christopher the entire two years they were together and Milan claims he was cheating with other men.

Miles Brock seems to have responded to the shade. Brock posted a picture of himself on Instagram and captioned it, “When the hate don’t work they start telling lies…my only goal in life is to one day make it on the Forbes list! If your only goal in life is making it on The Shade Room I can’t even relate to you!”

Many “Love & Hip Hop: Hollywood” fans were hoping that Milan and Miles would work it all out. Sadly, that doesn’t look like it will be happening.