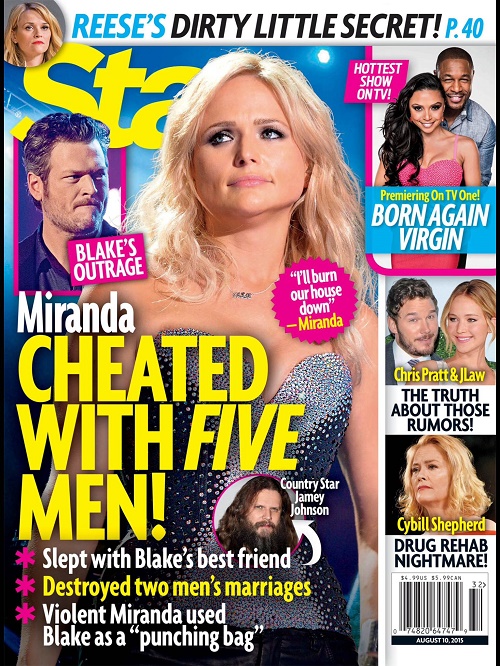 Country singers Blake Shelton and Miranda Lambert just confirmed their divorce and pulled the plug on their four year marriage. The mud-slinging between the two celebs’ camps is getting over the top and they are both insisting that the other cheated. While Blake has a history of cheating, word on the internet is that Miranda is a far cry from the innocent victim she portrays. The fact that Blake is the one that filed for divorce and Blake is the one that threw all his wife’s stuff out on their front porch speaks volumes about who did who wrong.

Star Magazine is obviously on Team Blake. This week’s cover features a photo of Miranda Lambert and the headline screams: “Miranda Cheated With Five Men! Slept With Blake’s Best Friend, Destroyed Two Marriages.” According to Star’s inside sources, Blake and Miranda’s relationship was basically built from the ground up on a foundation of lies and affairs. Let’s not forget that when Blake and Miranda first began dating, Blake was married to another woman, who was too busy to care he was cheating – because she was cheating on another man!

Star’s insider dished that back in 2007 Miranda actually cheated on Blake with his best friend, Jamey Johnson, and a major league baseball player named Josh Beckett. The source revealed, “Josh was dating his childhood sweetheart Holly when he first got involved with Miranda, Holly may have known about the affair but she married him anyway. Even when his new wife got pregnant, Josh still pined for Miranda and pressured her to dump Blake for him. The truth is Josh was Miranda’s other real love.”

According to Star Magazine, Miranda began acting paranoid and accusing Blake of cheating on her with multiple women – Blake knew something was up and his wife just felt guilty about something she was doing behind his back, so he hired a private investigator who discovered that Miranda was cheating with one of her employees on tour. Star explains, “Blake flew to one of her shows to confront them and he caught her hugging the other man. They were forced to admit everything, it was obvious what was going on. Blake filed for divorce, as far as he is concerned this whole marriage was a mistake. He is heartbroken and furious and wants nothing to do with Miranda.”

At this point, it’s safe to say that Blake and Miranda just weren’t built for a monogamous relationship. Are you Team Blake or Team Miranda? Who do you think cheated on who? Share your thoughts and theories in the comments below!