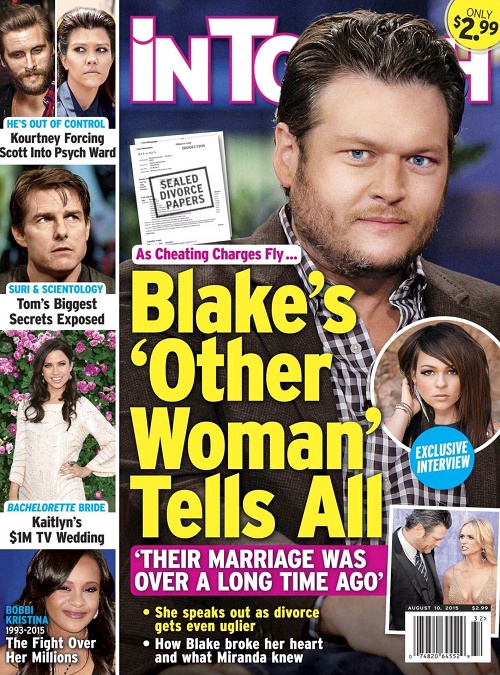 Blake Shelton and Miranda Lambert’s divorce has gone from messy to downright dirty. Both country music superstars’ camps have leaked stories accusing the other of cheating, and on July 28 Blake dumped all of Miranda’s possessions onto the front porch of the Oklahoma home they used to share. While general consensus is that Miranda cheated on Blake, we can’t forget about Blake’s former mistress Cady Grove. Once a cheater always a cheater, right?

Of course, Cady Grove jumped on the opportunity to get her name in the news and drum up some publicity for her singing career when Blake and Miranda announced their divorce – and she is telling all in an exclusive interview in the latest edition of In Touch Magazine. For those of you who don’t remember, Cady and Blake met on Twitter in 2011 and she invited him to come star in her new music video. After some flirtatious tweets, Blake met up with the aspiring country music singer – and they carried out an affair for nearly a year.

When Blake and Miranda announced their divorce, Cady bombarded Twitter with a series of not-so-cryptic tweets about how she is still madly in love with Blake and he is her “one true love.” Cady dished to In Touch Magazine, “I don’t hate him, he is an amazing person. I know Blake – not Blake Shelton, the one who drinks and puts on a show. After four years of being apart I couldn’t hurt him the way that he hurt me. When you love someone it doesn’t matter if they run your heart over with a truck and shoot you in the face – you forgive them. I want to lie to protect him.”

Is it just us, or does Cady Grove sound super crazy? She apparently hasn’t even seen or spoke to Blake in over four years, but she is “still in love with him.” It’s safe to say that Blake wasn’t cheating on Miranda with Cady recently, but their affair definitely did some irreparable damage to Blake and Miranda’s marriage. Frankly, we’re all shocked they lasted this long after the scandal. And, if Blake cheated with Cady, who is to say he ever stopped cheating with other women? He may have cut her loose because she was bat-shit crazy, but that doesn’t mean he didn’t have other mistresses.

Have you been following Blake and Miranda’s divorce? Do you think that Cady Grove was just one of many mistresses? Or was Miranda the one that cheated on Blake? Let us know what you think in the comments below!