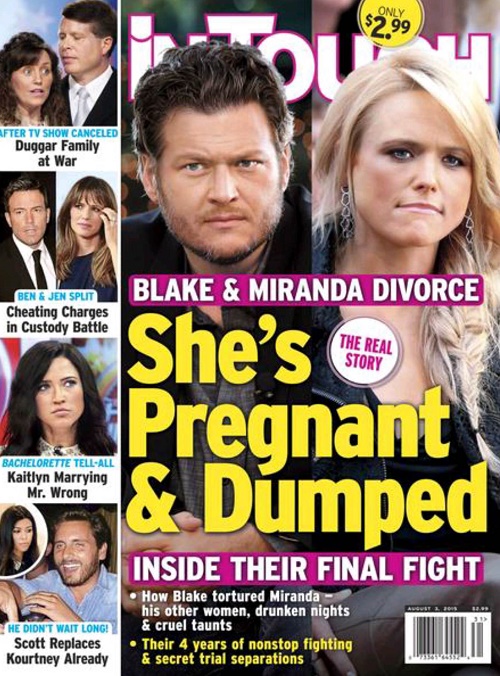 Blake Shelton and Miranda Lambert’s divorce shocked the country music singers’ fans. Just when we thought that Blake and Miranda’s breakup couldn’t get any messier, a bombshell new report reveals that Miranda Lambert is pregnant! Although Blake has accused his now ex-wife of cheating, not only with country music singer Chris Young but also with another mystery man, Miranda maintains that she did not stray from her marriage – and if that is the case then the baby is definitely Blake Shelton’s.

Anyone who has followed Blake and Miranda throughout their four-year marriage knows that the couple has always had issues. Miranda desperately wanted to settle down and start making a family and trying to get pregnant – but between Blake’s excessive drinking and never-ending cheating scandals, she knew that it was not the right time to start trying for baby number one. Ironically, just a few days before announcing their divorce, Miranda was shocked to learn that she was pregnant – and according to In Touch Magazine the bun in the oven was conceived during a “night of rare make-up sex” leading up to their official breakup.

Miranda Lambert is reportedly devastated. Not only did Blake blindside her with a divorce and force her to move all of her animals and belongings out of their shared Oklahoma home – now she has to deal with the reality of being a single mother as well. Apparently, finding out she was pregnant and being dumped in the same month is taking a toll on the country music diva. An insider dished to In Touch Magazine, “Miranda is humiliated and embarrassed, but she is not feeling sorry for herself. She has however been unusually quiet around her band, family, crew, and friends while grappling with the idea of being a divorced single mom.”

Do you think that Miranda’s pregnancy could save their marriage? Will Blake have second thoughts when he learns he has a baby on the way with Lambert? Or will it have the opposite effect, could the responsibility just scare of the hard-partying drinker for good? Let us know what you think in the comments below!