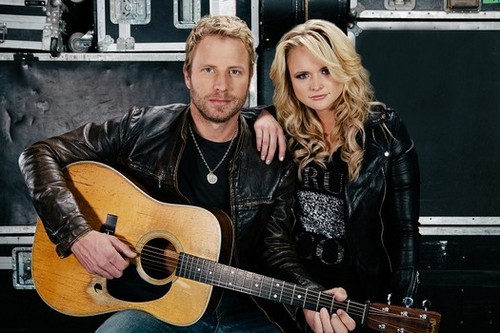 What is going on with Dierks Bentley and Miranda Lambert? Miranda Lambert’s divorce from Blake Shelton was just finalized a few months ago, but Miranda is already single and ready to mingle. And, she has been doing a lot of mingling since her marriage ended. Rumor has it that Miranda Lambert has been hooking up with fellow country music singer Sam Hunt – but that wasn’t who she took along as her date to the Music City Walk Of Fame on October 6.

Miranda Lambert turned a few heads when she arrived with fellow country music singer Dierks Bentley to the event in Nashville. Obviously Dierks and Miranda were just attending the event as “friends,” seeing as how Dierks has been happily married to his wife Cassidy Black for ten years, they said their “I Do’s” in 2005 and have had three children since. But, in all fairness – when has a wedding ring ever stopped Miranda Lambert?

Anyone who is familiar with Miranda and Blake’s relationship can tell you that Blake was not single when he began hooking up with Miranda. And, he is not the only married man that she has been linked to throughout the years. A couple of the five men that tabloids claim she cheated on Blake with were also happily married.

We like to think that Dierks Bentley isn’t “that kind of guy,” and would never cheat on his wife Cassidy. But, Miranda Lambert is on the prowl – and seems to have thing for unavailable men. If we were Dierks’ wife, we would be nipping that “friendship” in the bud real quick. What do you guys think is going on between Bentley and Lambert, should Cassidy be concerned? Share your thoughts in the comments below!