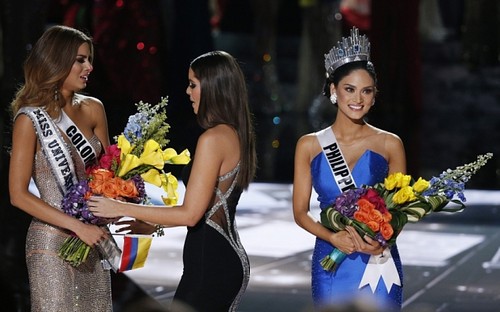 Miss Colombia Ariadna Gutierrez is a “diva b***h’ according to Miss Universe judge Perez Hilton. The celebrity blogger also had harsh words for Steve Harvey, who royally screwed up when announcing the winner of the 2015 Miss Universe pageant.

Perez Hilton was one of four judges present during the now-historic Miss Universe pageant disaster. Also on board were former Miss Universe Olivia Culpo, along with Emmitt Smith and Niecy Nash. During his GMA interview on Monday, December 21, Perez spoke about the controversial mistake when Steve Harvey announced the wrong winner.

Perez felt like as a judge for the beauty pageant, fans really needed to hear from him amid the chaos.

Perez was pretty blunt when discussing the controversy over Steve Harvey’s Miss Universe mistake. Hilton said of Harvey that he just “did not do his job.” There was no love for Steve when Hilton talked about the gigantic blunder that is already being considered a major event in pageant history.

Despite Harvey’s numerous apologies and obvious devastation over the mistake, Perez is definitely holding a grudge for the uproar and blames the pageant host for all of the 2015 Miss Universe crown drama.

In Perez Hilton’s podcast with Chris Booker, the Miss Universe judge got a lot more personal about why Miss Colombia wasn’t the pageant winner. “I don’t know if the people at home could see this, but Miss Colombia was being straight-up diva b***h,” Hilton told Booker. “[Gutierrez was] rude to her translator. She was giving the most awful side-eye, throwing major shade.”

While the tragic mistake wasn’t Miss Colombia’s fault at all, Perez made it clear that he doesn’t consider her a victim. As a matter of fact, the heartless way that Hilton talks about the first runner up after such a traumatic experience shows that he really doesn’t like Miss Colombia at all.

Apparently the South American beauty had a bad attitude but Hilton could at least have a heart after the 21-year old contestant had her dreams destroyed in front of the world and then laughed about for days after.

Perez obviously isn’t a fan of Miss Colombia because he went on in his rant against the beauty pageant contestant. Hilton said, “I think she (Miss Colombia) truly believed she was going to win. Whereas Miss Philippines came with something to prove.” Perez addressed the recent social media posts made by Ariadna Gutierrez after winning and then losing the Miss Universe crown.

The first runner up posted a photo of herself wearing the Miss Universe crown and captioned the photo, “FOREVER YOUR MISS UNIVERSE!! COLOMBIA !!!!!!!”

Perez Hilton had something to say about the tacky Instagram post. “I see Miss Colombia posting on Instagram that she’s the true winner,” Hilton quipped about Gutierrez.

The Colombian beauty obviously is still reeling from her worst nightmare come true. Some think the beauty queen may never recover from the trauma of having the pageant crown publicly removed after the the very unfortunate error. Others think the publicity behind Steve Harvey’s mistake will help catapult Ariadna Gutierrez’ career.

Either way it’s pretty obvious that Perez Hilton hates her and doesn’t care how traumatic the de-crowning was for Gutierrez.