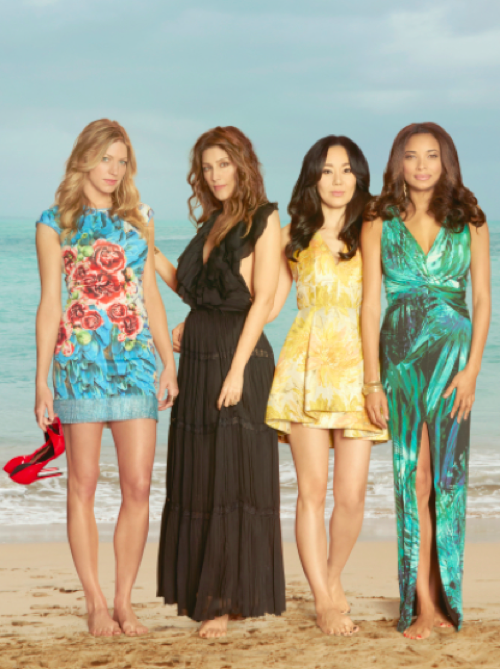 Tonight on ABC their new drama MISTRESSES continues with an all new Thursday June 18, season 3 premiere called, “Gone Girl; I’ll Be Watching You.” On tonight’s show in the third-season opener, Karen delivers some bad news to Joss, who then hurries to join Scott. Meanwhile, April invites relatives to stay with her; Karen receives her test results; and a driven fashion designer named Calista arrives on the scene.

On the last episode, tension and mixed emotions swirled around the lives of the four girlfriends as they prepared for Joss’s big engagement party. Karen anxiously awaited the results of her HIV test, April had to rely on Daniel to keep her and Lucy safe from her ex-husband’s violent enemies and a dejected Harry must decide if he should help Scott with yet another surprise for Joss. Meanwhile, Savi wondered if she should admit her change of heart. Did you watch the last episode? If you missed it we have a full and detailed recap, right here for you.

On tonight’s show per say the ABC synopsis “picking up where last season’s cliffhanger left off, “Gone Girl” begins with the bride-to-be in the arms of another man. Having confessed their true feelings, Joss and Harry are making out on the beach when Karen calls with bad news and Joss races to be with Scott. Meanwhile, April invites her half-brother Scotty and his mother to town and they arrive with Uncle Marc in tow. Karen makes a return visit to her doctor, Alec and the results of her blood test are about to change her life in a very dramatic way. Fashion designer Calista Raines arrives on the scene determined to get what she wants.”

The wedding was running late and apparently the elderly shouldn’t have been left out in the sun for too long.

Picking up from where they left off last summer, Joss was on the brink of being a runaway bride. She was in fact down on the beach about to cheat on her then fiancée with another man when Scott’s grandmother had her emergency. So, all in all, it seems like the powers that be decided to be cruel with Scott because not only was he about to be jilted on the hottest day of the year but his grandmother also ended up having a stroke on top of that. But, sadly for Scott, he simply could not catch a break.

His Grandma June later died at the hospital.

Sadly, Grandma just couldn’t handle the heat and waiting for the bride to finally show up probably didn’t help as well. So if you look at it that way, like Scott’s family is currently doing, then what happened to grandma is actually Joss’s fault. If Joss hadn’t developed cold feet at the most crucial time then maybe Grandma would have been in the air-conditioned reception area right when she needed it.

Thankfully, however, Karen was able to get into touch with Joss and Harry so at the very most Joss was there to support Scott when he got the news. And seeing as she was feeling guilty at the time, Joss may have given Scott some false hope. See she told him that there was nothing wrong when she didn’t mean it.

It was said when he needed those words but it also makes taking it back that much harder. Especially as Joss then had several time bombs on her hands.

Savi saw her sister and her ex-husband going at it. And, naturally, she was upset. She felt betrayed and frankly she didn’t want to hear from either of them every again. So Savi went on to do the unthinkable. She told, as in texted, Joss that she wasn’t her sister anymore.

And, well, Savi has always been more than a sister. Savi was the one that practically raised Joss. So being cut off from the only mother she’s ever known sent Joss into a tailspin.

She didn’t what she wanted to do and in the meantime she had Harry whispering in her ear. He said Savi was bound to find out once they went public as a couple. So, to him, her reaction was inevitable. And he didn’t feel that Joss should let Savi come between them.

So he convinced Joss to come clean to Scott – Scott promptly threw her out of his house.

Joss asked Karen to crash at her place and, while she was there, Karen ended up revealing Savi’s secret. The one she was going to tell Joss but wanted to wait until after the wedding to say. You know in order to not mess with another’s woman special day.

Anyways, the secret is Savi apparently wanted Harry back. She had told both Karen and April that she was still in love with him and that she wanted a second chance. However, before she could get that chance, she caught her sister stealing it.

And after she heard that, Joss knew she couldn’t be with Harry. Harry had gotten attacked by Scott and Savi had left the country. Joss knew that too many people had gotten hurt.

So she walked away.

Joss and the girls hope that Savi will come back but, truthfully, the odds aren’t looking too good. They can wait all they like but now they have to start solving their own problems themselves.

Karen claims she wants to be a better person and this time she found an opportunity to prove it. The same doctor that ran her HIV test also profiled her blood. And what he found out is that she had a rare blood type. One that can come in handy if she agrees to provide his dying wife with bone marrow.

At first, Karen was scared about the prospect but meeting Dr. Alec’s wife turned out to be an eye-opener. The other woman was kind and even frank. She knew she was dying and yet she made peace with it. So that made Karen feel like she can help if she wants but if not then that will be ok as well.

As for April, talking to her daughter was an uphill battle. Lucy didn’t want to have anything to do with a mom that lied about whether or not her father was dead. So there was only one way to reach her daughter and that was for her to come clean for once.

April told Lucy everything. From her half-brother to everyone lying to April who then lied to Lucy. So after all that, Lucy just wanted to meet Scotty.

Scotty was technically the only family Lucy had besides her mother so the girl wanted to meet him. She needed to build a connection with him. Which she did though then Lucy wanted to spend even more time with him because she liked having him around.

And luckily that turned out to be not so much of a problem.

For quite some time now, Scotty and his mother and uncle had been living in an RV but recently Scotty’s mom has gotten a job opportunity that means she has to leave her son behind. With his fun-loving uncle Mark. So Lucy told her brother that he should stay near them.

And honestly that was too good to pass up.

No one wanted to come between Scotty and Lucy so that meant April was then stuck with Mark. The same Mark she disapproved of in every way. Though that really wasn’t Mark’s fault.

Mark didn’t have enough money to buy new sheets so Scotty slept on old ragged ones. And Mark didn’t know how to filter himself. And why would he when he only became someone’s “parent” in the last few hours.

So Mark ended up doing a lot of things wrong and instead of supporting him – April lashed out. It seems she was still hurt that Lucy was shutting her out. And unfortunately Mark was an easier target.

But April later made it up to Mark. She promised to help and even brought in Karen so that the other woman didn’t feel left out. Apparently that was one of Karen’s fears. She’s been afraid that with Savi gone then the group would suddenly fall apart.

Yet she was wrong. April and Karen can lean on each other and Joss can easily find a new friend to fill the empty space. She met renowned fashion designer Calista when Calista was spying on her cheating husband. And in exchange of favors, Joss helped Calista find out about her husband and Calista helped Joss grieve her sister.

It’s heartbreaking but eventually Joss had to let go.

Savi is in Italy and it appears that she isn’t regretting that decision. She sent both Karen and April a postcard telling them that she was well and she asked that no one tell Joss where she was.

Not that the last part mattered seeing as Savi had already left by time Joss attempted to call!

And her friends/family have decided to move on. April has allowed for Mark and Scotty to move in. Karen now has people to attend church with. And Joss is talking to Harry again.

She tried to shut him out but in the end Calista helped her to see that she shouldn’t make herself unhappy just to please someone else.