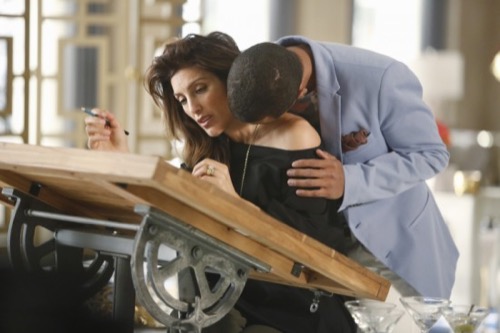 Tonight on ABC their new drama MISTRESSES continues with an all new Thursday July 9, season 3 episode 5 called, “Threesomes.” We’ve got your recap down below! On tonight’s show Scott [ Scott Trosman] asks Joss [Jes Macallan] to return his ring to him, and she discovers that he’s engaged again. Meanwhile, April’s [Rochelle Aytes] excited that Blair’s [Brian White] accepted a date with her; Karen faces the consequences of her encounter with Vivian and Alec; and Calista meets the other gals.

On the last episode, Joss pushed her new relationship with Harry faster than she should. A misunderstanding between Karen and Vivian lead to a deepening of their friendship and a surprising act of intimacy. Lucy’s sexy headmaster, Blair, taught April a thing or two about parenting while on a school camping trip. Calista found herself getting pulled back in by Luca, but just as she let her guard down it’s clear that Luca had ulterior motives. Did you watch the last episode? If you missed it we have a full and detailed recap, right here for you.

On tonight’s show per the ABC synopsis “April’s on a high after Blair agrees to a date. Karen deals with the aftermath of her scandalous encounter with Vivian and Alec, as they all try to figure out what this means for them moving forward. Calista meets the other ladies and finds a way to stay connected to Luca – only to be duped. Scott calls Joss to ask for his ring back and she finds out he’s already engaged to another woman. Issues continue to ensue in Harry and Joss’ relationship pushing them to the breaking point.”

Sound crazy but there’s reason behind Joss’s feelings. Before, as in when Karen was first sleeping with a married man, Joss’s friend hadn’t really taken the wife or her feelings into that much of consideration. Like sure she claimed she felt guilty about it but at no time did that make her feel like she should stop seeing the other woman’s husband.

She believed herself very much in love with this man. And counted it as a personal sacrifice to be sharing him with his family.

When morning came, Karen didn’t think she would ever see either of them again. And so she snuck out of the house to avoid awkward conversation. Then, surprisingly, she followed that up be going to church.

Karen is still trying to become a better person so she’s been sticking to attending church on the regular. And now she’s doing volunteer work. Which, as it turns out, can come back to bite you.

The priest at the church had found out about her past career as a therapist and he asked her to step in for a marriage counseling seminar that he’s hosting. So Karen was put in the position where she had to help couples move pass certain issues. And most of their issues turned out to be about sex.

So Karen ended up feeling trapped and the person that was in serious need of a seminar like that one – wasn’t there. Calista, you see, is still new to the group. And so she’s still learning her way around the other girls.

But Calista needs to speak to someone about both her marriage and her ongoing affair with her male assistant.

Joss knew how unhappy Calista was in her marriage but she didn’t know about the “mister”. Hence Calista has been holding back. Probably because she’s not comfortable opening herself too much. And she actually needs some professional help to go ahead either as a single woman or as a married one.

Though her husband doesn’t agree with her.

He prefers their marriage, as messed up as it is, to continue in the same fashion. So he shot down her suggestion to see a therapist. And then he tried to distract her with sex. Which is the only thing they have going for them.

Meanwhile Joss has had her own rude awakening and just like with Calista she feels like she’s in it alone.

Joss later told Harry all of this but he didn’t seem to have a problem with it until after the fact. Thus Joss finally confronted him. She told him he had to work on his communication because she was constantly left feeling like he was pulling back on their relationship and somehow he turned an issue about him around on her.

So those two have issues and Harry came to the point where he felt like it shouldn’t be this too hard. And that’s why he later told Joss that they moved too soon.

He said they could work on their relations perhaps in the future but for now they shouldn’t try to force it. And as for Karen, she eventually worked up the courage to speak to Alec and Vivian. Only for Alec to then try to set her up on a blind date.

The poor man was attempting to find a way out of what they did. But Karen didn’t like what he was doing. And Vivian said that Alec was only do that because he was scared.

They had all felt something that night and, after a lot of internal dialogue, Alec was forced to admit that he never felt happier than when he was with Karen and his wife.

And, well, April pursued and is now dating her daughter’s headmaster. So right now everything should be great for her. But her latest houseguest is feeling kind of jealous.

Hopefully, he’ll get over it but life at the house is going to be tense for a while.