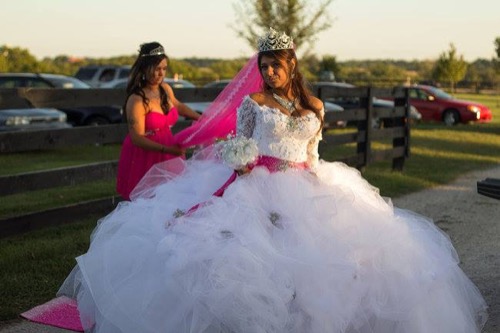 Tonight on TLC My Big Fat Gypsy Wedding airs with an all new February Thursday 26 season 4 premiere episode called, “The Greek Goddess and the Giant Gown,” and we have your weekly recap below. On tonight’s episode, in the season 4 premiere, a generational clash erupts at a sweet-16 party between and a girl and her grandmother.

My Big Fat American Gypsy Wedding is a reality television series that debuted on the TLC in April 2012 and features weddings of American Roma (gypsies), mostly of the Romanichal ethnic group.

On tonight’s episode per the TLC synopsis “in the Season 4 premiere, a generational clash erupts at a sweet-16 party between and a girl and her grandmother; and a bride wants to make a statement for the ages with an elaborate wedding dress.”

Tonight’s episode is going to be an interesting one, which you won’t want to miss. So be sure to tune in for our live coverage of TLC′s My Big Fat Gypsy Wedding Season 4 premiere at 9PM EST! While you wait for our recap, hit the comments and let us know how excited you are about the new season tonight.

On #GypsyWedding, 25 year old Tatiana is a Greek gypsy. She says it’s similar to Romani but there are fewer of them. She says appearance is very important in their culture to find a man. Her mother Maria runs the family and they have high standards for marriage. She says Greeks want to wait for Mister Right. Tatiana is marrying Zuki who is a Kurdish traveller. He says they are close in practices to other gypsies. Tatiana says at first her parents resisted Zuki but now realize he’s what she needs.

He takes her on a carriage ride and drops to one knee and pops the question. She says yes. Tatiana says she wants a Fall wedding and it’s a one shot thing to get it right. She calls Sondra Celli to get a huge gypsy dress with lots of bling. Sondra says she can make a giant one but it will weigh more than 100 pounds and she can trip and fall. Sondra gets her crew together to plot the dress. She says Tatiana’s short height is an issue but hopes to make gypsy history with it.

Julie is a full Romani gypsy and live with mom Crystal’s strict gypsy rules. Julie waits on the men in their family like servants. She hangs out with cousin Erica because she’s not allowed to be around boys. 15 year old Julie says she’s old enough to get married but wants to hang out with some boys first. Her grandmother is a famed gypsy matriarch named Tils who is intolerant of her wanting to mess with her reputation.

Tils says she grew up in a tent and said when men came around camp, you had to put the flaps down so they couldn’t see you. Tils tells Julie she has to stay pure and says she would like to have her in a tent the way it used to be. Tils says she’ll find the right boy for her but Julie sees nothing wrong with talking to boys. Crystal is organizing a gypsy coming of age party for Julie that will also involve a dress with bells. She says you have to walk so the bells in it don’t ring. Ringing bells is a sign of impurity.

Back in St Louis, Tatiana and Zuki are three weeks out for their wedding and are looking at venues that will fit her giant wedding dress. Zuki wonders how big it will be. Tatiana sits Zuki down to write his vows. He lets her look at them but all he did was draw a stick figure putting a gun to his head. He says he has it in his head but she demands he write it and he says the wedding stress is getting to her. Tatiana is most concerned about the dress. She calls Sondra about the dress.

Tatiana is worried it won’t be done but Sondra reassures her that she’s never failed to deliver. Tomorrow is Romanichal gypsy Julie’s 16th birthday. Tils doesn’t like that certain boys are coming. Crystal says her mom never let them date and says Julie needs a little but of freedom. It’s party day and the dress arrives. She has a dress with multicolored bet skirts and jewels all over it. It’s like a stack of fluffy Life Savers. She has to learn to walk without it swishing or the bells ringing.

Tils says at the 16th party when a girl becomes a woman you put a blanket on her to protect her until she finds a husband. Julie gets the dress on but is very worried because the bells keep ringing. She’s loaded into a carriage and is driven to her party. Crystal says she felt like crying when she saw Julie. Her Aunt Marie says her mother didn’t let her have a sweet 16 so this is bitter sweet. Julie starts the gauntlet of walking while trying to keep her bells silent.

Tatiana and Zuki found an outside venue that will allow for her giant dress. They’re working on the reception plans. They talk to the venue owner about the tradition of plate smashing. He wants to know that they won’t crack his floors and they assure him it won’t. Sondra is stressing over the giant dress. She says it will weigh 110 pounds and Marney, her blinger, says Sondra is obsessed. Sondra says this dress will be the highlight of her career and says they can’t sleep til it’s done.

Tatiana is on her way for her first fitting. She brought her mom and bridesmaid Vicki. Sondra worries that Tatiana won’t like it but says she pulled out all the stops to make it perfect. Sondra goes out to greet them and hugs Tatiana. They blindfold her and bring her inside. She has a fit over how beautiful her gown is. Sondra asks if it’s big enough but Tatiana is crying. She hugs Sondra and thanks her. The train is also gigantic. Tatiana says it’s more than she expected.

She can’t wait to try it on. She brings in a team to help get Tatiana into it. They start by putting Tatiana into the hoop skirt. It takes a team to get her into it. It takes two hours to get her into it. They bring in Maria and Vicki to see it. I don’t see how her groom is going to get close enough to put a ring on her hand or kiss her once they say their vows. Tatiana tries to walk in it. They head outside. Tatiana can’t get through the door and Sondra says they need to figure out how to get it out the door.

Julie has her blanket on her and starts the walk down the aisle into the party. She walks carefully and everyone gets quiet to listen. Her Aunt Marie says if the bells ring it will dishonor the family. Tils is happy that her bells went off. She says she knows Julie has never been touched by a boy. At the party, Tils is trying to guard Julie and doesn’t like all the wild dancing. Marie says Tils was really strict with her and she wants her to back off.

One boy comes to talk to her and Tils intervenes. Then Marie comes over and runs her mom off. She yanks her mom out by the hair and says she won’t let her old ass ruin her niece’s party. The day after the party, Julie talks to her grandma about her being able to talk to boys. Tils says if Julie respects her, she’ll bend just a little bit.

It’s 48 hours before the wedding and Tatiana comes back for her second fitting. Sondra says she’s fixing the dress problem to get it out the door. They walk her down the street and everyone is gawking at her in her giant dress. They try to shove her into a car but it won’t work. Sondra says she has no idea how to get her into a vehicle to get her to the venue. It’s Taitana’s wedding day and they’re trying to get her dressed and to the venue. It has 500 feet of tubing.

Zuki is getting dressed according to Kurdish tradition. He’s in a spiffy bow tie and striped shirt getting dressed by his family. He can’t wait to see her in her gown. She’s trying to get onto the elevator to go downstairs. They cram her on and make it downstairs. Tatiana hears sirens and they tell her it’s for her. Cops are escorting a flatbed semi that she will ride on to her wedding. There are punpkins and it’s all done up like Fall. They now try to shove her up onto the truck.

They drive her to the wedding on a 53 foot flatbed with a four cycle police escort. Everyone waves as she goes by. She shouts – gypsy wedding – over and over. She can’t wait for Zuki to see her in the dress. He waits in their outdoor venue while she says she’s always wanted the biggest, blingiest, most bad ass dress ever. Marie says it’s like Romani weddings in that they like bling. Zuki is very nervous and can’t see her until she reaches the altar. He hears sirens then wonders if the noise is for Tatiana.

Zuki has to keep his back turned but he can hear everyone else cheering and screaming. They help her down carefully. Then they touch up her makeup. Zuki is so nervous. Her mom tucks a sugar cube in her bosom – a Greek gypsy tradition so she’ll be sweet for her husband. Her dad is ready to walk her down the aisle. The crowd from all over the world is applauding and Zuki is light headed with stress. He turns and sees her and they both start crying.

They have a traditional Greek ceremony and he says Zuki can kiss his bride but it looks like he can barely reach her. He helps her down from the altar. Sondra is thrilled that her huge dress was a success. At the reception, Tatiana is in a smaller version of the dress. Everyone talks about the truck that brought her in. The first dance involves plate smashing and Tatiana says she would do this over and over again. They kiss happily.