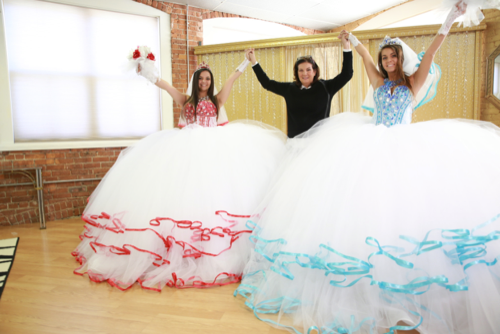 Tonight on TLC My Big Fat American Gypsy Wedding airs with an all new Thursday, March 26 season 4 episode 5 called, “Gypsy Jinxes and Wedding Hijinks,” and we have your weekly recap below. On tonight’s episode, a Gypsy sisters plan to marry their gorger fiancés in a double wedding, but a jealous sister-in-law could ruin their big day.

On the last episode, a daughter had to perform ancient rituals; a gypsy teen planned to marry against her families wishes. Did you watch the last episode? If you missed it, we have a full and detailed recap right here for you.

On tonight’s episode per the TLC synopsis “Gypsy sisters plan to marry their gorger fiancés in a double wedding, but a jealous sister-in-law could ruin their big day. Meanwhile, a superstitious couple fear their wedding is cursed.”

Tonight’s episode is going to be an interesting one, which you won’t want to miss. So be sure to tune in for our live coverage of TLC′s My Big American Fat Gypsy Wedding Season 4 episode 5 at 9PM EST! While you wait for our recap, hit the comments and let us know how excited you are about the new season tonight.

On #GypsyWedding, we’re in Louisville, KY where there are two Romanichal gypsy sisters. Brittany is 25 and Kalynn is 18. Brittany says their world is great and they always get their own way. They live at home with mom Joy who loves her girls. Kalynn says they cook, clean and learn to be a good wife. They are having a double wedding because they are best friends and do everything together.

Last year, the girls were bridesmaids when sister Tara got married. They want to outshine her and Brittany says she wants a humongous dress and they argue over whose dress will be bigger. Their fiances are both Gorgers. Kalynn is marrying 19 year old Quentin. She’s been dating him for two years and says she’s got him trained to gypsy ways.

BJ is Brittany’s fiance and they’ve only known him three weeks. She says she put a gypsy spell on him so he proposed in three weeks. Joy says BJ is making her daughter happy. BJ comes to see his sister Rissa who isn’t happy about the wedding. BJ and Rissa live together since the rest of their family moved to California. She says Brittany comes between them and is in trouble.

Rissa doesn’t trust her and calls her a weirdo and says she hypnotized her brother. She says Brittany brain washed her brother. BJ says he doesn’t want to choose between them. Rissa says she won’t start anything but will finish it. Three weeks before the double wedding, Brittany asks BJ if he’s got Rissa under control for the wedding.

He’s marrying a Romanichal girl named Joni. He says they are very traditional and believe in bad luck and karma. His fiancee is 31. She says she’s outgoing, loving and big on tradition. She says they keep a clean house and have dinner cooked when her husband comes home. They met online and then he proposed on their third date. He says he loves her sense of humor.

Joni says they’re a lot alike and she loves everything about him. Their wedding is in 10 days so Joni calls Sondra Celli. She tells Sondra she wants honey to be themed. Joy says bad luck at her wedding is her biggest fear. Sondra tells her crew they need bees and dripping honey on it. Brittany and Kalynn call Sondra about their red and blue dresses with white at the bottom with lots of bling.

They both want a bigger dress. Sondra says she’ll have her hands full with them. The girls then meet with their fiances and Brittany says they want to do a gypsy spell on them and they have to drink potion to prove their love. Brittany says it’s an ancient spell. Quentin says it’s fine but BJ pushes back then agrees to it but says it’s weird.

BJ says his sister is already tripping and thinks she’s brain washing him already and is going to have a problem with this spell. Brittany says this doesn’t concern Rissa. Brittany and Kalynn come to see Sondra for a dress fitting. Brittany says she’s worried she’ll be disappointed. Sondra tells them to put on blindfolds then it’s reveal time. The girls scream.

They have identical dresses just in two different colors. Sondra hugs the girls who are crying. Brittany is upset that Kalynn’s dress is one inch bigger. They try them on. Joy says they look beautiful. They struggle to get out of Sondra’s studio to take a walk. They are down to one week before their big wedding day.

BJ and Quentin go pick out their tuxes to compliment the dresses. The tux guy says the ritual spell sounds crazy. Quentin is fine with it but BJ is nervous. He says he doesn’t like going behind his sister’s back to do this spell. In Romney, West Virginia, Joy and Trooper are getting married. Joy’s maid of honor has gone missing. Sondra shows up with the dress to improve her mood.

Because gypsies bring honey to a wedding for luck, she has honey and bees as a theme. The bouquet has a honey pot on it and glittery bees. The dress has a slit up the leg and embroider up the back that says she got stung by a sweet honey bee. Trooper is nervous but says it will be fine. Joni gets into her dress but now the minister is late. Trooper says this is bad luck. Trouble, Trooper’s nephew says gypsies call this is a Jonah and it’s really bad luck.

Trooper sees her in her dress and it’s bad luck. The minister shows up late and there’s no time for a rehearsal. Joni turns into a bridezilla and flips out on everyone. Trooper says she was pissed and she’s knocking stuff over. Trooper says that’s enough and he picks her up and carries her out of the wedding. Trouble says this is what they do. Trooper says the wedding is off and to turn off the cameras. Next day, Trooper says they are going to the court house. They do and they’re man and wife.

Brittany and Kalynn are with the ritual and Sheila Harris is preparing the ritual. She says the spell is never written down and is passed woman to woman. The guys show up all dressed in white as gorgers. Brittany is worried BJ will freak out and not do the spell. Sheila makes the potion and tells them to drink it. They both do. BJ gags but Sheila says he has to drink it.

Quentin says it was the most disgusting thing ever. Sheila welcomes them to the gypsy family. The girls go get their nails done the day before the wedding. Rissa sees the photos of the spell that Brittany posted. She confronts BJ and asks what he’s been doing. She says he’s brain washing him and says she’s going to ruin Brittany’s wedding day. BJ says it’s his wedding day and he’s done with her drama.

It’s the day of the double wedding and both girls are excited. The dresses show up and the girls squeal. They are in giant boxes. The girls get dressed and tuck themselves into them. Quentin and BJ also get dressed. Quentin says he can’t wait to see Kalynn in her dress. The girls are shoved into a limo and the dresses barely fit. Rissa shows up spoiling for a fight but the brides are late.

Rissa is mad that Brittany is late and thinks she’s being selfish. The guys are thrilled to see their women walk down the aisle. Quentin says she’s so beautiful he wants to cry. The ceremony starts. They say their I do’s and have a kiss. Rissa sits quietly but is glaring. At the reception, Rissa says her dress is ugly and thinks the whole wedding is ugly.

Brittany has had enough and asks her why she’s trying to ruin their lives. Rissa says Brittany is disrespectful and they start arguing. Brittany asks why she even came. They argue then Kalynn joins in and it escalates. The cops are called and says to go their separate ways or he’ll arrest one of them. BJ is sad to be stuck between them but is furious at Rissa for ruining their day.

BJ asks Rissa what she can expect when she’s being so disrespectful. She tells him to go ahead and stand by her. She says she knows that’s his wife, but she’s his sister. Brittany says she’s happy he stuck with her and says he showed he’s the man for her. Kalynn and Quentin dance and the reception goes much better once Rissa is gone.