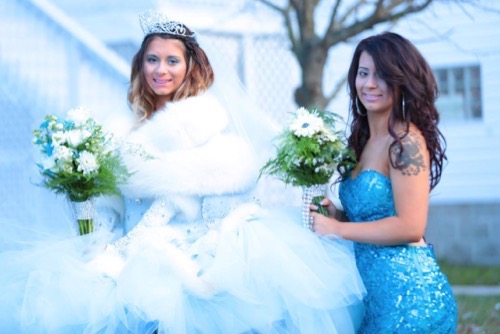 Tonight on TLC My Big Fat American Gypsy Wedding airs with an all new Thursday March 19, season 4 episode 3 called, “Rituals, Rules and the Ultimate Gypsy Test,” and we have your weekly recap below. On tonight’s episode, a daughter must perform ancient rituals

On the last episode, a strict Gypsy mom laid down the law by arranging a marriage in an attempt to tame her 16 year-old daughter’s wild ways. Later the arrival of a Romanichal baby sparked a family war over ancient gypsy traditions. Did you watch the last episode? If you missed it, we have a full and detailed recap right here for you.

On tonight’s episode per say the TLC synopsis “a daughter must perform ancient rituals; a gypsy teen plans to marry against her families wishes.”

Tonight’s episode is going to be an interesting one, which you won’t want to miss. So be sure to tune in for our live coverage of TLC′s My Big American Fat Gypsy Wedding Season 4 episode 4 at 9PM EST! While you wait for our recap, hit the comments and let us know how excited you are about the new season tonight.

#GypsyWedding starts in Louisville, KY with Romanichal gypsies. Melissa is 23 and says she loves being a gypsy because they’re all about family. She has two children and lives at home with them. Her life fell apart because she rejected rules and had babies with Gorger men. She says there are not trustworthy at all. But now she met the gypsy man of her dreams. They met online and she says she loves him. She says her romance is moving ahead. They only knew each other a week and he proposed over the internet. She says a week is long enough.

Maison is 17 and is an Irish Romanichal. He lives 300 miles away. He does home improvement work. He says it’s hard to find a Romanichal girl and saw her green eyes and had to have her. He says he knows it’s right. Her mom Sheila isn’t happy and says she likes traditional things and says she doesn’t want her daughter hurt again. They meet for lunch and Sheila says she just met him online and doesn’t know him. She says he’s moving too quick and being too nice.

Melissa says she thought she’d be happy that she’s marrying a Romanichal. Sheila says he has to meet her standards. Maison leaves to go to Louisville to meet and marry Melissa. His mom is nervous and tells him to make good choices and don’t let anyone take advantage of her. His mom Jacqueline says she’ll miss him so much.

Over in Uniontown, PA is Romanichal gypsy Alyssa who is 18. She says she can cook and clean for her man and look good doing it. She is marrying Gorger hip hop artist Brian. She says she loves him with all hear heart. He raps for her and she’s thrilled. He says marrying a gypsy has advantages. He’s excited about the good food and good housecleaning. He tells her to fold his jeans and she does. Her twin sister Maddy and dad Mark aren’t happy about it. Mark says the guy is a bum and wants her to marry a Romanichal.

Maddy says Alyssa has caught him talking to other girls and says she thinks he’s a whore. Alyssa is pushing ahead with her wedding in two weeks time and calls Sondra Celli for her dress. She tells her that her theme is Winter Wonderland. Maison drives 300 miles to meet Melissa and has flowers and candles waiting. Sheila has a surprise for her and says she can’t go see her. She’s going to meet him instead so she can find out what he’s about. Melissa tells her not to be mean.

She says she has to let her mom just do her thing. Maison waits and waits. She sits and says she’s Melissa’s mom and asks how he is. He says he can’t believe it. She says she’s angry and says her daughter has been hurt by Gorgers and says this Romeo and Juliet thing isn’t going to happen. He says he came all the way from Ohio to marry her and says he’s ready to earn her blessing. He says her mom is crazy. Sheila says he needs to stay away from Melissa and says they’ll be in touch.

Maison calls Melissa and says he can’t believe what happened. She says her mom is so traditional. He says he can’t believe he’s not allowed to see her. He’s worried. Next day, Sheila summons Maison for the ultimate gypsy test. She says he has to go through the darkening of the groom – an ancient gypsy ritual. It dates back hundreds of years but hasn’t been done for a while.

He agrees. He has to have stuff thrown at him while he doesn’t shed a tear. Sheila says she’ll welcome him with open arms if he passes. Others gets the buckets and throw stuff at him. He says he felt humiliated to have this stuff thrown at him – eggs, flour and he’s just worried their won’t be a wedding and doesn’t want to tear up. Sheila stops the truck and checks him out. She says he passes and hugs him. She says he’s welcome to the family.

He says he can’t wait to marry the girl of his dreams. She says he can’t see Melissa until the wedding day. Alyssa has gone for a dress fitting. Sondra tells Maddy to cover her sister’s eyes. She shows her the blue costume. It’s huge and has fur and bling. She also has glass slippers. Now they try it on. Maddy is in tears when she sees it. She says she feels like a queen. Maddy says she’s happy for her but doesn’t want to lose her.

Brain is out with his Gorger friends enjoying his last night of freedom. A woman tries to kiss him but he says no. But once he gets drunk, he starts acting out then kisses another girl. It’s the day before Alyssa’s wedding and then she gets a text from Brian admitting he’s done bad. She’s furious and rants to Maddy who says it would break her heart. Alyssa says he didn’t even try to get her past it. Brian hopes she will give him a second chance. She comes to see him.

He says he’s really sorry and says things got out of hand. She says she wishes it would never happen. He says it was a mistake and meant nothing. Alyssa says she knows he loves her and can’t live without him. They make up. She says they have to forget and move on. Back in Louisville, Maison calls Melissa and says he can’t wait to meet her. He says it’s hard not to be with her. Melissa says he’s so romantic. That night, Sheila runs her a bath of goat’s milk. She says she’s unfit for marriage because she’s had two kids by Gorgers.

Alyssa’s dress arrives and she’s thrilled. Maddy says her sister is gorgeous anyway and with the gown, it’s even better. Brian waits at the venue and hopes Alyssa shows up. Mark is ready to give Alyssa away and says he’ll never accept Brian says he has to do this. Alyssa comes wobbling down the aisle and she’s thrilled to see him there. She says she doesn’t care what he did and says they can work through it. They’re married and off to the reception gypsy style. She smears cake on his face and he kisses her.

But then talk gets around about Brian’s cheating. She says all the women were mad and then talked where her dad hears it. He says Brian doesn’t deserve her. He attacks his new son in law and the fight goes crazy and it’s gypsy versus Gorger. Gaige goes crazy and it’s on. Alyssa tries to hold back her husband and says she can’t believe her dad tried to ruin her wedding. The cops are called. Mark says Alyssa made a mistake and says she could have done better.

Maddy says Alyssa loves Brian but she doesn’t know if he loves her. Brian screams that they have to leave because of the cops. It’s Melissa and Maison’s wedding day. She’s nervous to meet him. Before then she has to get her gypsy outfit on. Sondra is there and flew into town to meet her mom. They get her into the dress. It’s purple. Sheila is moved to tears. Sondra says Maison will be knocked out when he sees her. Her mom is thrilled with the veil of darkness. She says it protects her.

Maison gets ready at a nearby hotel for his wedding with groomsman JC. He’s nervous but is looking forward to giving her the ring. They head out to the venue. Sheila is getting her ready and puts the veil on top of her. Melissa is annoyed about the veil and says she can’t believe the first time Maison sees her she’ll have this on. Sheila believes if Melissa sees anyone before they’re married their marriage will be cursed.

Maison waits at the end of the aisle and stares at his watch nervously. Melissa is struggling to get down the stairs in her heavy veil and she’s mad at her mom. Sheila says the veil means she only has eyes for the groom. She loads her in the back of the limo and Melissa is angry. Her mom says she loves her and thanks her for doing this all for her. Maison is getting nervous because she’s late. Maison is shocked by the veil.

He say she looked beautiful even with the veil. He says that was Sheila and was not surprising. Sheila says Maison must think she’s crazy but says they will thank her. She pulls back her veil and Maison is thrilled. Melissa says all the traditions made it all better. They have their ceremony. Melissa says her mom loves her and did all this for her own good. Later they dance at the gypsy bash. Their first dance was a big moment and he finally gets a good kiss. They did the jumping of the broom.

Maison says he’s been through hell and back to marry her but says he would do it all again.