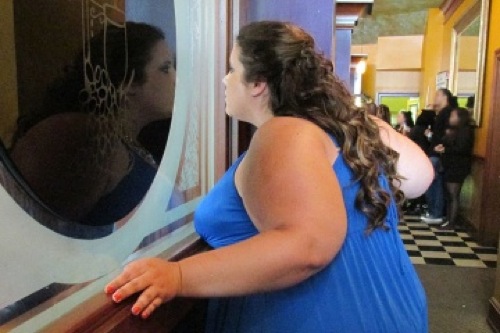 Tonight on TLC My Big Fat Fabulous Life premieres with an all new Sunday January 13, season 1 premiere called, “A Fat Girl Dancing” and we have your weekly recap below. On tonight’s episode, Whitney rekindles her love for dancing when she gets encouraging news from a doctor.

The show follows a North Carolina woman who was diagnosed with an endocrine system disorder called polyscystic ovary syndrome (PCOS) that caused her to gain hundreds of pounds.

On tonight’s episode as per the TLC synopsis, “after a health disorder caused her to gain more than 230 pounds, Whitney was forced to give up her one, true love: dancing. But after encouraging news from a doctor, she’s determined to show the world she can still move, even at 380 pounds.”

Whitney is 30, lives at home with her parents and is a “fat dancer.” She has PCOS, polycystic ovarian syndrome, which makes it really easy for her to gain weight and really hard for her to lose weight.

After rapid weight gain, she couldn’t look herself in the mirror and quit dancing.

She moved back in with her parents after college and started dancing again. When she made a YouTube video of herself dancing, it became a hit. However, the positive feedback from her videos doesn’t change that she is the heaviest she’s ever been in her life.

At 30, she feels she should be at a certain place in her life and is envious of others who have that. She is pressured by her parents to have a baby.
Whitney, who previously thought there were no men who liked women her size, has found out that is not the case at all. She has met a guy named Andrew online, and is nervous about meeting him.

Whitney goes to a new doctor hoping she will know more about her condition than other doctors she has seen. Whitney says that PCOS results in three things: balding, bearding and being fat.

Whitney is doing a new dance with Todd, her dance partner, in order to lose weight and possibly get a YouTube video out of it. She says that because of her condition, if she isn’t losing weight, she is gaining weight.

Whitney says her father can’t comprehend the idea that she may be fat and happy, because he is caught up in the social stigma surrounding her weight.
When they meet up, he asks her about her weight, and asks her how much she’s planning on losing. When she says 100, he asks why she is only aiming to lose 100, saying she will get more out of life if she loses the weight. When he suggests that she won’t be able to find someone to start a family with, she tells him there are guys out there who think her body is perfect and that her self worth is the most important thing.

When she meets with her mother alone and talks about her father’s view on her weight, her mother tells him that she thinks he feels that way because he thinks that will make her happy.

Whitney meets up with her guy friend Buddy, and tells him she has decided she’s ready to start dating again. They were into each other in the past, but now they’re just friends.

Whitney calls in her friends to get ready for her date at the last minute.

She talks about passing the “fleshold,” where she used to be able to go into a bar and get hit on, and now she only gets hit on by men who are into fat women. Her mom comes in and tries to help by telling her to clean up the “debris” in her house, and what accessories to wear.

Whitney says that for a date, she worries about things other women may not worry about, such as what kind of chairs they have at a certain restaurant.
She goes to the restaurant and meets her date, whom she says looks pretty good and a lot like he did in his pictures.

She asks him how she looks in comparison to her online pictures. He says she looked exactly as he hopes she would look.

She tells him she is looking to lose 100 pounds, and he says there is nothing wrong with being fat and if she wanted to gain, he’d be okay with that. She says she is definitely not going to gain weight. By the end of the date, she isn’t sure of his motivations and says he probably isn’t the guy for her.

At home, her dad asks her how her date went. She says he was really enthusiastic about her body. She says that in a perfect world she would like for him to like something more than her body, but that’s all he is into. Her family acts uncomfortable, and she asks why everyone is so uncomfortable with the idea that someone likes her body.