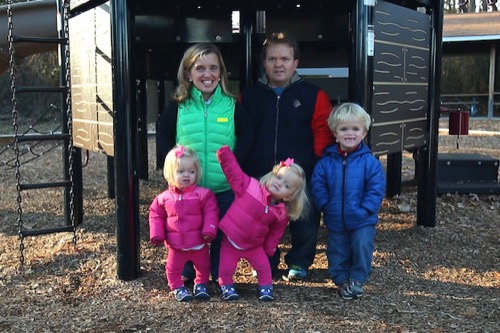 Tonight on TLC Our Little Family and Counting starring the Hamill Family continues with an all new Tuesday February 24, season 1 episode 3 & 4 called, “Jack King of the Castle; It’s Potty Training Time!” and we have your recap below. On tonight’s episode, when Dan sees Jack struggling to keep up with friends at the playgrounds, he decides to build a smaller play set for is son to enjoy!

On the last episode, Jack started kindergarten, but Michelle worried how he would fit in with the other children; Halloween for the Hamills meant the start of a new family tradition of costumes for everyone, even Dan and Michelle. Meanwhile, Michelle thought Jack was old enough to take on some chores. Did you watch the last episode? If you missed it, we have a full and detailed recap for you right here.

On tonight’s episode as per the TLC synopsis, “when Dan sees Jack struggling to keep up with friends at the playgrounds, he decides to build a smaller play set for is son to enjoy! Meanwhile, Michelle frets over Jack playing soccer with older, bigger kids. Also it’s the Hamills’ 7th anniversary and Dan’s gift for Michelle misses the mark. To make matters even less romantic it’s time to potty train Cece and Cate! Can Michelle figure out a way to ad romance to her marriage and get these girls out of diapers?”

Tonight’s episode is going to be filled with drama and you won’t want to miss it, so be sure to tune in for our live coverage of the show tonight at 9 PM EST! While you wait for our recap hit the comments and let us know how excited you are about this new show.

When Jack struggles on a regular playground, Dan decides to build him a playset that he will be able to climb easily. Michelle tells him not to tell Jack about it until it is actually built in order to avoid disappointment if it doesn’t get done.

Michelle takes the kids grocery shopping. In order to reach items that are high up, she climbs the shelves.

Jack’s having his last soccer practice before the last game of the season. This is his second season playing. Michelle thinks it has gotten harder for Jack to keep up in soccer as the kids his age get bigger.

Michelle sees Jack’s shirt is way too long, a tripping hazard. She runs over and fixes it by tying it up in the back.

Dan calls his friend Mike to help him get the playset done in a timely manner. The playset needs to be usable by Jack and by other kids. Dan is happy to be building something again since the kids have made him too busy to do much lately, especially something for his son.

Kids ask Michelle why she is little, which she simply explains to them. She says in confessional that it doesn’t bother her at all because little kids are just curious, and once you explain to them, they move on.

Dan and Michelle take the kids out to celebrate Jack’s soccer season. Dan tells Jack that he’s started building him a castle, which mildly irritates Michelle.

Later, Dan shows Michelle and their daughters the unfinished castle, which he must get done by 3 pm when Jack gets out of school.  When Jack and his friends get out, they all rush to the completed castle.

Michelle and Dan’s seventh anniversary has come up, and Dan has gotten her a portable vacuum. Michelle says in confessional that she doesn’t know what he was thinking, and that it’s kind of sad in a way. While Dan thinks the gift is sweet, Michelle thinks something must have gone wrong for him to get her this. She storms out of the room.

Michelle is getting ready to potty train the girls. She has bought them a potty and told them they will be rewarded with candy for using it. Michelle gives Jack the job of encouraging them and being a coach. Dan suggests having a contest, where whoever sits on the potty first gets lunch at a fast food place with their dad.

Michelle goes out for a girls’ night with her friends. They suggest she spend a romantic weekend with Dan to spice up their relationship. When she gets back, she finds Dan in bed reading a book. She tells him she is going to take their anniversary date one step further and have them spend the weekend in Baltimore alone.

Dan and Michelle arrive at their suite in Baltimore, which has a trail of rose petals leading to the bed, which is also covered in rose petals, as well as a bottle of champagne, which Dan called ahead and had set up. Michelle says in confessional that she appreciated the gesture because it made her feel more like a wife and not just a mom.

The couple shares a romantic dinner, during which Michelle suggests having another child. Dan, however, is not trying to do that.  Dan gives Michelle a pair of earrings to make up for his previous vacuum gift.

Back at the house, Jack falls and starts crying, and then CeCe starts crying. The room sounds like a mess when the couple calls for an update.

Dan and Michelle come back from their trip to find that the girls have been wearing diapers, but they don’t mind. Michelle says in confessional that she probably shouldn’t have left until the girls were potty trained, and now she’ll have to start over.