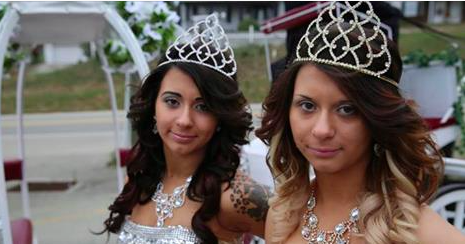 Tonight on TLC My Big Fat American Gypsy Wedding airs with an all new Thursday, April 9 season 4 episode 7 called, “A Romney Rebel Returns,” and we have your weekly recap below. On tonight’s episode, a gypsy woman gets married to a gorger, but their families aren’t too thrilled about it.

On the last episode, a family feud was reignited when a man married his former babysitter; a progressive woman defied her traditional Romanichal mom by marrying a gorger. Did you watch the last episode? If you missed it, we have a full and detailed recap right here for you.

On tonight’s episode per the TLC synopsis “a Gypsy woman gets married to a gorger, but their families aren’t too thrilled about it; a Gypsy mother tries to make up for being absent from her twin daughters’ lives by throwing them a lavish birthday party when they turn 18.”

Tonight’s episode is going to be an interesting one, which you won’t want to miss. So be sure to tune in for our live coverage of TLC′s My Big American Fat Gypsy Wedding Season 4 episode 7 at 9PM EST! While you wait for our recap, hit the comments and let us know how excited you are about the new season tonight.

On #GypsyWedding, we see a montage of overprotective and controlling gypsy moms. In Uniontown, Pennsylvania we see 32 year old Romanichal mom Angelina who had twins at 15. She talks about partying as a teen. She left the girls when she was 18 and she was partying, doing drugs and went to prison. Her twins Maddy and Alyssa were raised by inconsistently. They demonstrate how to cook gypsy toast – bread with an egg in the middle of it.

They talk about how they were bounced around from relative to relative. Then Alyssa married Brian on a recent episode of Gypsy Wedding. Mom Angelina recently moved back to try and reconcile with the girls. Maddy says her mom is trying but she doesn’t trust her completely. Angelina tells them she’s put her problems behind her. She says she knows she missed out on a lot and should have stayed. She says she wish she could go back and change things.

Maddy says the past is the past. Angelina says they can move forward as adults with good lives. Alyssa says she’s happy she’s back in their lives. Angelina says she knows it’s hard for them to look at her as a mom. Angelina takes the girls bowling and talks about throwing them a traditional gypsy coming of age celebration for their 18th. They want a royal theme. Angelina says she wants to show them that she will do anything for them.

Over in Louisville, Kentucky, 27 year old Romny Danielle has two daughters and she’s with gorger Todd who’s also 27. They decided to finally tie the knot under pressure from family and their daughters. She calls Sondra Celli to order her dress. She says she wants a tight corset with red in it. She says she wants her girls to have dresses to coordinate. Todd’s family has moved away and only has his Aunt Jennifer still in town.

She says he’s like a son to her and wants him to think before he marries Danielle saying he’s marrying the whole gypsy family. She doesn’t want him to deal with all the drama. Danielle’s mom is Sandy Harris and Jenifer doesn’t like her and thinks the wedding will be trouble with the gypsies. Danielle meets her mom Sandy who doesn’t like Todd because she thinks he doesn’t make enough money to properly take care of her.

Danielle is worried that someone will ruin her wedding. Sandy says as long as no one pisses her off, it will be okay. Angelina talks to the girls about how many people they want to invite and what they want for the party. The girls want tiaras and a red carpet plus thrones. Angelina says they should arrive in a limo but the girls ask for a horse and carriage to feel more royal. At Alyssa’s wedding, she had a Sondra Celli dress. Now the girls take measurements and call Sondra.

They tell her they are having a royal theme and want matching princess dresses in silver and gold. Sondra says she can make it double the bling. Angelina talks to her mom Lori and tells her what all the girls want for their party. Lori tells her she can do it and says it’s really important to the girls. Angelina and the girls decide to hold an ancient gypsy ceremony to get rid of bad vibes. It’s called the shedding of the skin and is intended to give a fresh start.

They start a fire in a trashcan out in the woods. Angelina throws in a birthday candle for all the birthdays she missed. Maddy wrote an angry letter about how she’s mad her mom left. She throws that into the fire. Alyssa burns a shirt that was worn when she left them. Angelina cries as she watches the stuff burn. She says the past if all gone and it’s new beginnings. Maddy says the ritual really helped her. They hug and agree to a new start.

Danielle is ready to marry Todd her BF and baby daddy. Danielle gets glammed up for her big day. The dress box is delivered. She first unpacks the tiny dress for her infant and small dress for her other daughter. Then they unpack Danielle’s giant gown. It has layer after layer of red tulle and white fabric with jeweled flowers. Aunt Jennifer and Todd’s family is on one side of the venue while Danielle’s mom Sandy and friends are on the other side. Danielle freaks while one of her petticoat falls off. She has to do an emergency repair and the caterers help.

Danielle gets her dress rehabbed and the wedding begins. Todd is thrilled by how she looks. Sandy is still upset that her daughter is marrying a gorger. Todd starts to get nervous as the ceremony starts. Then Sandy tells Todd he should be happy and is making her mad. Todd tells her that he’ll only keep his mouth shut so long. Todd tells her to get the f-k out and calls her a b-tch. Some people haul Sandy out because she’s making a scene but she goes crazy.

Sandy smacks Jennifer’s daughter and then Jennifer hits her. Then Danielle freaks out because Jennifer hit her mom. Soon the bride and groom are in it and it’s an absolute brawl. The best man lands on the wedding cake, glass is broken and it’s ruined. Sandy grabs a glass and hits one of the gorgers in the head. Then Sandy starts throwing vases. Danielle says it’s the wedding from hell. Aunt Jennifer gets Todd outside and wants him to get in the car to leave.

Todd is furious and says Sandy ruined the wedding. He starts bashing in the window and then Sandy’s friends come rushing at him. Amber tries to pull them off of him. The cops roll up and Todd says it’s the first time he was happy to see the cops. The venue is in ruins. Jennifer hopes Todd sees this as a wake up call that he shouldn’t be part of this family. Danielle says her mom sabotaged everything and she feels like her life is over.

The next day, Todd and Danielle go to the courthouse to have a civil wedding. They sign the papers and they are officially married. They kiss and it’s done. Danielle says love conquered all. On the day before Maddy and Alyssa’s big party, they go to pick out a dress for Angelina. The girls decide on a pink dress that makes her look like a Barbie. Angelina says she had a tough life at 18 and doesn’t want them to have the life she had. They bond over the dress shopping.

The dresses arrive and the girls open the boxes. Alyssa says the dresses are even better than she expected. They have shoes, tiara and jewelry to match. The girls dresses are both too big and they think their aunt messed up when she did their measurements. Angelina makes calls trying to get some help with the dresses. They take their dresses to a dress shop and they get them tailored quickly. Angelina works on their hair and makeup wile the seamstresses work on the gowns.

The girls get dressed and make their big entrance. They’re ready to go to their party and wait on their carriage. The horse even has gold and silver glittered hooves. They’re thrilled. They pull up at the party venue and everyone is there to cheer them on. They head inside and sit on their thrones. Alyssa’s husband Brian is there and is pleased. The girls pose happily for photos with their mom Angelina and it all goes off well – for a time.

But then Angelina hears a gorger woman talking shit about her daughters. Angelina confronts her and then a fight breaks out. Angelina hits the woman and then Maddy and Alyssa start beating on her too. The woman finally gets in her car and leaves. Brian says messing with a gypsy is like messing with a wolf pack. Once the woman is thrown out, the party goes great. Angelina says now the girls know she has their back and they have hers.