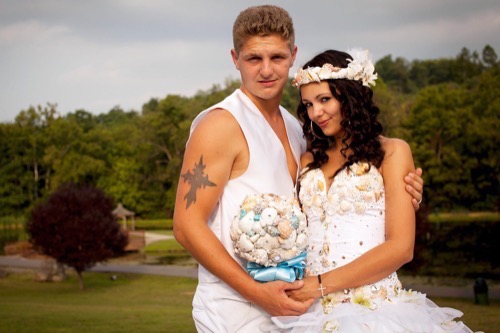 Tonight on TLC My Big Fat American Gypsy Wedding airs with an all new Thursday April 2, season 4 episode 6 called, “Gypsy Jinxes and Wedding Hijinks,” and we have your weekly recap below. On tonight’s episode, a family feud is reignited when a man marries his former babysitter.

On the last episode, Gypsy sisters planned to marry their gorger fiancés in a double wedding, but a jealous sister-in-law could have ruined their big day. Meanwhile, a superstitious couple feared their wedding was cursed. Did you watch the last episode? If you missed it, we have a full and detailed recap right here for you.

On tonight’s episode per say the TLC synopsis “a family feud is reignited when a man marries his former babysitter; a progressive woman defies her traditional Romanichal mom by marrying a gorger.”

Tonight’s episode is going to be an interesting one, which you won’t want to miss. So be sure to tune in for our live coverage of TLC′s My Big American Fat Gypsy Wedding Season 4 episode 6 at 9PM EST! While you wait for our recap, hit the comments and let us know how excited you are about the new season tonight.

#GypsyWedding starts in rural Indiana with Romanichal gypsy Danielle who is burning sage to puridy her home. She’s much older than most Romny women who have been married for a long time. She’s dating 23 year old Kody that she used to babysit when he was just three and she was 13. Danielle was waiting on her dream man and says an arranged marriage would have made her miserable. They saved for the perfect wedding and Kody proposed a month ago.

But Louann, Kody’s mama isn’t happy and doesn’t want him to marry her. She tells her son to just live with him and says Danielle is just a hag and it makes her sick. Kody says he loves her. Danielle says she’s nasty and doesn’t want grandkids from them. Danielle’s mom Stella and Kody’s mom Louann have been feuding for 30 years. She likes Kody but not Louann. She hopes the moms don’t get into a fight at the wedding. Danielle orders her dream dress and calls Sondra Celli.

She says she was a platinum dress with lights on it. They make plans. Down in Nashville, independent Romanichal gypsy Sasha is 26 and from a traditional Romny family but she’s a rebel. She ran away at 19 to get a job and is dating a gorger named Jacob. He’s 24 and studying to be a teacher. He’s fine with the gypsy stuff and says she stole his heart from the beginning. He blindfolds her and leads her to the car. She gets in and he drives her to the lake.

He takes her to the shore and hands her a rose then drops to one knee and proposes. She loves her ring and is thrilled. He asks what her mom would say and she freaks when she hears he didn’t ask her mom first. Jeanette is her mom and says she raised her girls to be strong women and marry gypsies. Sasha calls her mom to tell her about her engagement. Jeanette is furious the gorger proposed to her behind her back and says neither have done this the right way.

Sasha and Jacob are summoned to face her mom’s wrath. Jeanette says he didn’t even ask her and says she’s okay with he dating a gorger as long as he does what tradition says. She says Jacob has to prove himself to them. She says he has to go lay blacktop with the men folk. Sasha calls Sondra Celli to order her dress. She says they’re doing a 1920s theme wedding and wants a low backed dress with feathers. Jacob is sent to learn to live the gypsy way.

He has to pave with her Uncle Tony. Jacob doesn’t want to go graveling but says he’ll do it if it gets her mom off his back. Jacob thinks he’s finished then the uncle pours more. He says they’re trying to make his life difficult. Uncle Tony gives him passing marks. They come back to the house and Jeanette asks how it went and Tony says Sasha should be proud and he’s a good man. Jeanette says Jacob still needs to show he can accept their ways.

She wants him to take the Boswell name in accordance with Romny culture. Jacob says that’s too high an expectation and says he is keeping his name. Sasha says she doesn’t like this stress. In Boston, Danielle goes for a fitting with Sondra. She has her aunt and Kody’s sister Rosalie is with her. Stella watches from a video chat because she’s scared to fly. The dress is giant and the veil has lights on it. Danielle loves her dress and says Kody is going to love it.

Back in Indiana, Danielle and Kody have gone to look at a venue. Danielle has to show Louann that she’s worthy. Louann says Danielle has to undergo an old school gypsy test to show she can be a good wife. She tells her she has to make a gypsy stew. Louann gives her a cooking lesson then samples the stew. She says the meat is kind of chewy and says she doesn’t like it. Danielle says she cooked it exactly like she showed her too.

Louann says it tastes sloppy and says she and her family are sloppy. Danielle is nervous that Louann will steal her wedding day away from her. She leaves upset. In Ohio, Jacob is breaking the news to his family that Sasha’s family wants him to take their name. His family isn’t happy about that and his dad says no way. Jacob takes Sasha out to dinner to talk and she says she understands if he doesn’t want to do it. She says it’s the pinnacle of respect for a gorger coming to the family to take their name. He’s worried her mom will flip if he doesn’t.

Jacob and Sasha go to check on the decorations at their wedding venue. Sasha is nervous to see her dress. The big box is delivered. They pull out the dress and Sasha is thrilled. They put her into it and lace it up. She says Sondra made her dream dress. Jeanette says Sasha’s dress is amazing but won’t let go of the name issue.

Danielle is worried that her and Kody’s mom will blow up at the wedding so she and Rosalie decide to get them together before hand for a girls day. Louann is furious to see Stella there. Danielle asks them to enjoy the day and relax but the moms try to ignore each other. Louann snaps and flips off Stella who responds in kind. Then Louann says Stella slept with her husband and Stella tells her to get over it. Loouann calls her the whore of Babylon.

Danielle had no clue they slept with the same man. Husband stealing is an act of treachery. Once Rosa hears this, now she’s furious at Danielle’s mom too. It’s Sasha’s wedding day. Jacob decided not to take the family name. Sasha gets out at the wedding venue in her gorgeous feathered dress. They exchange their vows and then they kiss. They’re married. Sasha says the name thing isn’t happening and the preacher announces them as Mr and Mrs Shirley.

Jeanette is furious and Sasha tells her to stop it. She and Uncle Tony walk out and Jeanette says to get the cameras out of her face. The rest of the family stays for the party. Jeanette is outside and Tony tells her to calm down and let it go. He says it’s not the time and place. Jeanette goes back inside and apologizes to her daughter. Sasha is very happy that it’s okay. Jeanette even hugs Jacob who is pleased he didn’t have to change his name.

Jacob says they’re going to have 16 babies and she says 2. He says maybe one of the babies can have Boswell as a middle name. Back in Indiana, it’s Kody and Danielle’s wedding day. Danielle is petrified that her mom and Kody’s mom will have drama at the wedding. They all load up and head to the wedding venue. Kody says Danielle looks beautiful. Kody starts crying. They say their vows and kiss and they’re married.

They pull her out of the big dress to dance at the reception. Louann and Stella are facing off in the bathroom. Stella says she’s been blocking her since the 80s. Stella says she know she was bad and knows what she did and says she’s sorry. Louann says it’s over and they’re going to have a good time at the wedding. Louann gives Danielle one of her good rings and officially welcomes her to the family. Rosa isn’t ready to forgive though.

Rosa makes her maid of honor speech but refuses to mention Danielle’s mom and the bride and maid of honor end up rolling in glass on the floor. Danielle says they will have a great married life even if they have to run away from both their families.