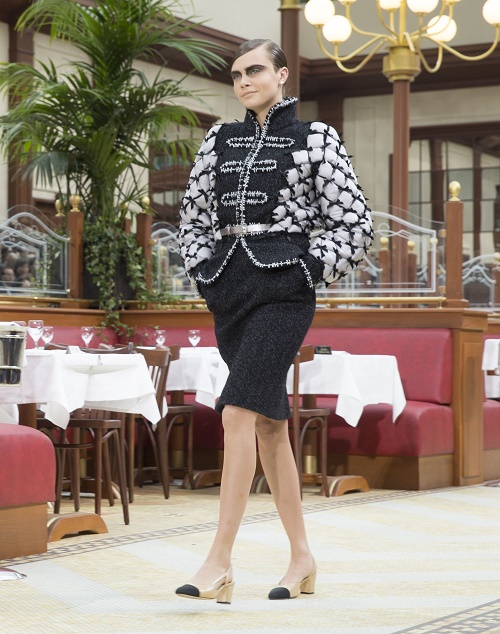 Screaming catfights breaking out during Paris Fashion Week between Naomi Campbell and Cara Delevingne? Does this surprise anyone? Supermodel catfights have always been stuff of legend, especially since things have calmed down significantly in the past decade or so. Sure, models are constantly embroiled in feuds and catfights, but none of them are really all that public anymore. But of course, we can always count on Cara Delevingne and Naomi Campbell to shake things up.

According to reports, Cara Delevingne and Naomi Campbell got into a screaming match during Paris Fashion Week while at a party at Paris club Castel [for Dasha Zhukova’s Garage Magazine], which then quickly evolved into a violent, physical fight. Page Six’s eyewitnesses explain that Naomi was shouting at Cara, that Cara was grabbing at Naomi’s hair, and the two were shoving each other around.

These same sources claim that Naomi and Cara got into a fight over their mutual friend, Rihanna, with the sources adding, “Naomi accused Cara of ‘disrespecting’ Rihanna and started yelling, ­before Naomi pushed Cara, who pushed back. Cara pulled Naomi’s weave, but it didn’t come off. Naomi was angry because she felt Cara had said something negative about Rihanna.”

However, another source explained the story a little differently, stating, “It was a noisy and packed party. Naomi was saying all these nonsensical things, she was ranting. There was a messy pushing match. Cara didn’t understand because there’s no problem between her and Rihanna. Cara didn’t want to be involved and was telling Naomi, ‘Get away from me!’ ”

Naomi’s already taken to Twitter to deny the rumors of a fight, but it’s clear that she’s using social media and her reps to shut down this story. Obviously, she and Cara did get into a physical fight, despite her best attempts to pretend otherwise. Hence, she’s now using Cara ‘disrespecting’ Rihanna as a solid excuse to explain why she got into the fight, but do we really need an explanation? Naomi Campbell’s history speaks for itself, doesn’t it?