Nashville: On The Record 2 Recap All the Season 3 Best Songs “A One Hour Music Special” 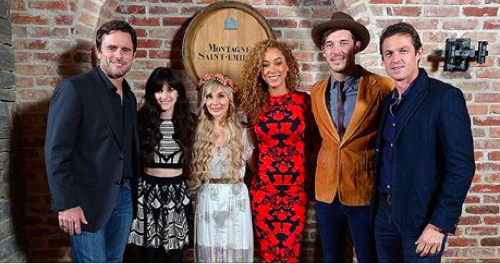 Tonight on ABC Nashville starring Hayden Panettiere continues with an all new Wednesday March 25, season 3 special episode called, “On the Record 2,” and we have your weekly recap below. On tonight’s episode, cast members sing songs from the show and participate in backstage interviews.

On the last episode, the Grand Ole Opry honored Rayna on a special anniversary, so she asked Deacon and her daughters to sing with her. Meanwhile, Will’s distressed to be collaborating with a gay man on a songwriting project; and Sadie shared her private ordeal on national TV. Did you watch the last episode? If you missed it, we have a full and detailed recap right here for you.

On tonight’s episode as per the ABC synopsis, “cast members sing songs from the show and participate in backstage interviews. Also: a duet from Deana Carter and Charles Esten; and a performance by Reba. Among those performing: Clare Bowen; Chris Caramack; Will Chase; Jonathan Jackson; Sam Palladio; Maisy and Lennon Stella; and Aubrey Peeples.”

On #Nashville, the cast is playing at the Grand Old Opry in Nashville and they have Reba McIntyre performing as their special guest. Jonathon Jackson (Avery), Clare Bowen (Scarlett) and Sam Palladio (Gunnar) are singing Borrow My Heart by Phillip and Lia LaRue. The crowd loves it. Jonathon talks about the opportunities the show offers. Aubrey Peeples (Layla) says they get to be real musicians. Palladino says he’s working on music in his spare time. They all talk about how great and inspiring the show has been for them. Next is Fade Into You performed by Bowen and Palladino.

Chris Carmack (Will) says performing at the Opry House is incredible. Chip Esten (Deacon) says he doesn’t have enough adjectives to describe it. Jonathon Jackson sings How to Learn to Live Alone by Gretchen Peters and Mary Gauthier. It’s hauntingly beautiful as he plays the piano and sings solo. Carmack is ready to sing with Peeples and they do Jaida Dreyer’s If Your Heart Can Handle It. They sound so good together. We don’t hear them sing together enough on the show.

Carmack says this really is music city. Esten says it blows him away how many songwriters are on music row writing great songs. Frankie Pine and Buddy Miller head the music team and screen tons of songs for the show. Peeples says the show runners work so hard. Jackson says it’s amazing how they put it all together. He says they have to think about the song and the emotions of the character. Esten says the songs often express better than written words could.

Esten comes out with Dean Carter and they sing the song they co-wrote I Know How to Love You Now. It’s so lovely. The crowd is eating up seeing their favorite TV stars on stage with their favorite local artists and songwriters. When they finish the crowd is loud with applause.

Next is Esten who thanks the audience for embracing and supporting the show. He talks about visiting the Nashville School of the Arts and says the CMA and ABC have donated millions to arts education. Esten introduces students that are in the audience. Lennon and Maisy Stella (Maddie and Daphne) are next and sing We Got a Love by Jill Andrews and Lori McKenna. The crowd goes wild. It was sweet.

Next is Carmack singing with Will Chase (Luke) and they perform If I Drink This Beer written by Brad Tursi and Jonathon Singleton. They nearly bring down the house with that one. The Opry shakes to the rafters as the crowd roars when they’re done. The stars talk about meeting Reba McIntyre. Jackson says she’s so down to earth and Esten says they got to sing Christmas carols with her. Bowen says she’s sweet and lovely and Peeples says it’s nice that Nashville legends are embracing the show.

Reba takes the stage to sing Going Out Like That written by Rhett Akins, Ben Hayslip and Jason Sellers. Everyone is on their feet shouting and cheering when she’s done. Esten introduces the finale and says they want to shift the focus to the incredible family of song writers. They have the songwriters in the crowd stand to get a big hand. Esten, Lennon and Maisy and Bowen are onstage and they sing Friend of Mine written by Lucy Schwartz and Johnny Hanson. The crowd goes wild when Carmack, Chase, Jackson and Palladio come out to sing the last big finale with them.