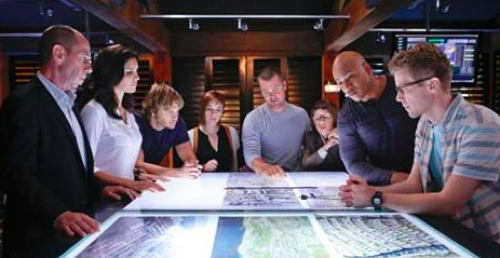 Tonight on CBS NCIS: Los Angeles continues with an all new Monday October 19, season 7 episode 5 called, “Blame It On Rio,” and we have your weekly recap below. On tonight’s episode, NCIS special agent DiNozzo (Michael Weatherly) partners with the NCIS: Los Angeles team.

On the last episode, Callen and Sam mysteriously received a cell phone and the caller threatened the lives of innocent people if the two didn’t do exactly what he said. Did you watch the last episode? If you missed it we have a full and detailed recap right here for you.

On tonight’s episode as per the CBS synopsis, “NCIS special agent DiNozzo partners with the NCIS: Los Angeles team to search the city after his prisoner escapes custody on a flight from Singapore to L.A.”

Special Agent Tony DiNozzo is need of some assistance on tonight’s episode of “NCIS:LA”. Apparently a prisoner by the name of Rio Syamsundin managed to escape his US Marshall detail while they were still in-flight. So Tony needs the help of the West Coast division in tracking down his prisoner and bringing the other man. And he quietly asked that the entire investigation happen under the radar.

It seems his boss Gibbs doesn’t know about the switch. And while it was technically not his fault, DiNozzo didn’t want to get into trouble for someone else’s mistake and just wanted to fix the problem in the little amount of time he had. Which wasn’t a lot. The prisoner had gone missing on early am flight and Gibbs was expecting DiNozzo to be on the two o’clock flight in the afternoon with their prisoner.

So the agents were on a time crunch though at the time they didn’t know it. They were given a case and that’s what they pursued with only a minimum of questions. Hetty on the other hand had figured out that DiNozzo wanted to hide this transgression from Washington so she kept his “secret”. And merely stood back and watch while her people went hunting for Rio Syamsundin.

Mr. Syamsundin laundered money for numerous organizations. Therefore there was a hope of taking him down and thereby making his associates weak enough to catch. And yet all that was in jeopardy because of an elaborate plan that appeared to have been created for the sole purpose of Syamsundin acting like a tourist.

Sam and Callen had theorized what happened on the flight and they think Syamsundin had a double waiting in the next seated area and a flight attendant on the payroll. So the Marshall was drugged and that’s when the switch happened. However, as the team began to look into Syamsundin’s whereabouts, they found out their prisoner wasn’t actually hiding. He had rented red mustang convertible and for all intents and purposes was driving around the city just to take in the view.

Next up is a Team Gwen pairing of Braiden Sunshine vs Lyndsey Elm. Braiden is 15 and has been in a band since he was 9. Lyndsey had a four chair turn in the blinds. Gwen and Selena have them sing Noone Is to Blame by Howard Jones (OMG – love this 80s song!!). They get their final notes then it’s battle time. Their voices are gorgeous together and they really do this classic justice.

Adam says it was like a tennis match. He says they each had a moment that showed him how much more they have and says Gwen can’t go wrong with either. Blake calls him Powder (HA!). Blake says Lindsey had it won until Braiden pulled out the last night and says they’ve seen the tip of the iceberg with both of them. He says this will break Gwen’s heart and tells her to flip a coin.

Pharrell says they are both interesting performers and Braiden showed there is so much more and says he likes his tone. He says then Lindsey colored the song beautifully and she can do more – he calls her voice seductive. He tells Gwen it’s tough. Gwen says Lindsey’s star came out tonight and she had tone, control and presence.

Then she tells Braiden that he’s so cool and so young. She says his high notes are mind blowing. She says she’s very confused. Gwen decides to go with her heart and says it’s Braiden. He’s shocked that he won and is moving on. Lindsey thanks Gwen for showing her confidence. Gwen goes to hug her. She says she feels bad and starts crying.

Gwen has used her last steal as has Adam. Pharrell and Blake each have one left. Next up is Team Adam’s final pairing of the night. It’s Andi and Alex vs Chance Pena. The identical twins have been singing together since high school and got a four chair turn for their harmony. Chance is only got a turn from Adam who tells the others they screwed up and they admit it.

Adam and John Fogerty chose Wherever You Will Go by The Calling. They get their notes, rehearse then prepare to do battle. The three harmonize together amazingly well but there’s a too loud percussion sound that distracts. It’s pretty amazing. The judges are amazed. The crowd goes wild. The judges are on their feet. Blake says it was magical and says sibling harmony is like nothing else.

He tells the girls it’s bullcrap they didn’t pick him at the Blinds. Blake says he didn’t think Chance could compare but then he thinks he won it. Pharrell says Andi and Alex are like two unicorns then says Chance was unbelievable and his voice led because it was the odd man out and says he has incredible control. Gwen says OMG. She says they are magic and the girls are candy in her ears.

Gwen says if she was 15 she would have Chance’s poster in her locker and would lose her mind over him. She says he needs to stay on the show. Now it’s down to Adam who says they were all so good. Chance says it’s tough to go against the girls since they are in sync. He says he thinks they should form a group together. He says this is brutal then decides to go with Andi and Alex.

They will move on to the Knock Outs and Adam says they are ethereal and that’s why he chose them. Then Chance thanks Adam for believing in him then Blake hits the steal buzzer. The girls cheer for him. Blake says he has something magical in his voice and he missed it in the blinds and deserves to be in the show. He says he’ll get him some socks and take him to the finale.