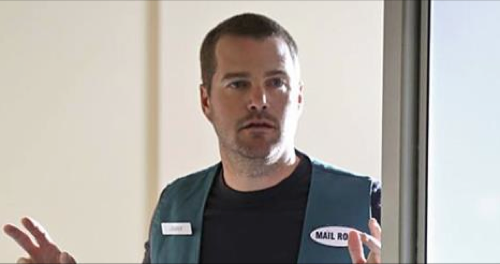 Tonight on CBS NCIS: Los Angeles continues with an all new Monday January 5, season 6 episode 12 called, “Spiral,” and we have your weekly recap below. On tonight’s episode, Callen [Chris O’Donnell] is taken hostage when terrorists take control of a building where he is working undercover to investigate an arms dealer. When the NCIS team arrive, they discover the entire building is wired with explosives.

On the last episode, the team investigated a burglary at a cyber-security company, but Callen had to steer clear of the crime scene after Hetty revealed his girlfriend, Joelle, was one of the lead witnesses. Also, the team discusses their personal holiday travel plans. Did you watch the last episode? If you missed it, we have a full and detailed recap, right here for you.

On tonight’s episode as per the CBS synopsis, “while Callen is undercover in the mail room of an office building to investigate an arms dealer, it is taken over by terrorists and Callen becomes a hostage. When the team arrives to help, they discover the entire building is wired with explosives.”

Callen was doing some undercover work in attempts to find evidence against a suspected arms when out of nowhere masked gunmen bum rushed the building and interrupted his investigation. And it seems this group of terrorists (though they’ve hadn’t announced their organization to any media outlets) do not in fact care about whose building they broke into or about money they can make by holding an entire office busing hostage which, in all honesty, is kind of scary. If they can kill the one man they could have ransomed for millions (the arms dealer) then what’s to stop them from killing someone like Callen who they only know as the mailman.

Callen’s friends were quickly alerted to the situation and though they wanted to move in right away to rescue him – they were at first deterred by what looked like a well-crafted plan. It appears the group planted explosives by wiring the whole building to keep out any sort of rescue team before they had even begun shooting people. So, getting everyone out isn’t going to be as easy as the team initially thought.

Nevertheless, the rescue team did make it into the building without triggering any of the alarms or the security cameras. And they split up once inside. Deeks and Kensi were going to try and help the hostages while Sam was going to act as Callen’s backup during what they hoped to be one quick and final confrontation.

But, once again, Deeks and Kensi were put off. The man watching the hostages had strapped himself to live explosives and that basically made the one person standing in their way bullet proof. So they couldn’t take him down without risking causalities. And they couldn’t use their phones to call in for help because the terrorists had also shut down all phone services into the building.

So Deeks ended up having to sneak out alone (without Kensi) in order to try and find some way to call back Sam. Sam had gotten his friend free but the terrorist hadn’t all been taken over. The leader was still alive and as long as he was – no one was safe.

The group was looking for something. And the team didn’t what it was until Sam and Callen stumbled across a doctor wandering the building.
The unfortunate truth is that company using the building was more than just a front for arms dealing. It seems like they actually were working and one of the jobs they were assigned to do was to find a cure for a virus. However the end result ended up being what Beale and Nell refer to as Ebola on drugs. It’s just as deadly but fast acting and can be caught as easily as the common cold.

After they got back into contact with the head office, Nell and Beale were able to identify the group that’s been harassing their team. Apparently they were once a part of the IRA. Though they separated themselves from each other after the IRA found this group to be too radical.

And, in spite of having a well-equipped federal team on the inside, the group still managed to get their hands on the virus!

Deeks and Kensi took care of their suicide bomber and they secured the building. Yet Sam and Callen weren’t as lucky in their own endeavours.

The doctor that had been wandering was actually a plant and after she threw one of the deadly virals into Callen’s path, thus preventing at least one of them from following, she then made a run for it. But Callen didn’t want Sam to stick around and watch him get sick. So he told Sam to complete the mission. And in the end the doctor only got as far as the roof before Sam shot and killed her.

Yet, while they were successful in preventing an outbreak, the team still had to worry about their friend Callen. Though the CDC helped solved that problem. Rather than dying, Callen woke up in a hospital in Georgia and right by his side was Sam who knew all along Callen was going to need support after he found himself in Georgia.

Callen is going to be ok but that was close call that shook everyone up!