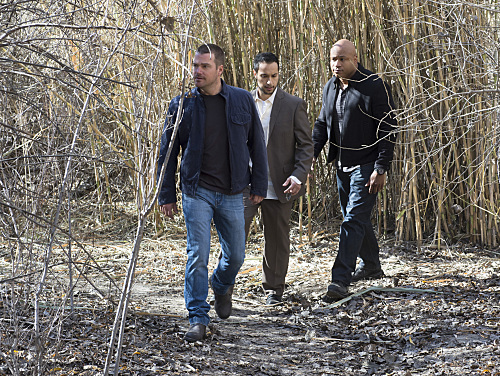 Tonight on CBS NCIS: Los Angeles continues with an all new Monday February 9, season 6 episode 15 called, “Forest for the Trees,” and we have your weekly recap below. On tonight’s episode, Callen [Chris O’Donnell] and Sam [LL Cool J] are kidnapped when they follow an anonymous tip about a missing NSA agent.

On the last episode, Callen and Sam went undercover as food truck owners in Mexico to find the source of an anthrax poisoning before it was used to create a bioweapon. Did you watch the last episode? If you missed it, we have a full and detailed recap right here for you.

On tonight’s episode as per the CBS synopsis, “Callen and Sam are kidnapped when they follow an anonymous tip about a missing NSA agent. When the team discover they are missing, they realize it may have been a trap set by terrorists.”

Sam and Callen are missing on tonight’s all new episode of “NCIS LA” and yet these two won’t eventually be found lazing about on the beach. Regrettably, it appears they’ve been kidnapped and now it up to their friends in the NCIS department to find them before something bad happens.

Luckily, the team quickly noticed the guys’ disappearance and thereby went into action as soon as possible. However, no matter how much they tried, not even were able to locate the guys. They tried tracking the guys’ phones and even tried to use satellite to find them. All to no avail!

But there was several hints about what the guys must have been up to when they were taken. Apparently Sam and Callen were investigating a missing NSA analysis when anonymous tip came in and gave them an address. Now everyone believes the address along with tip was a set up. Yet no one knows who’s behind it all.

Wherever the guys were taken to, it thankfully wasn’t that secure. So Sam and Callen managed to escape their cell and try their own luck at freeing themselves.

Meanwhile, back at Headquarters, Kensi and Deeks were receiving their assignments. They were told to trace Sam and Callen’s last known location and eventually they found the scene of the crime. The scene of the kidnapping, itself, was easy to identify after Deeks and Kensi found the car surrounded by used tranquillizers and gas canisters.

Though, Kensi started to worry when she found those items and Deeks, like always, had to be the one to placate all her fears. This time he did so by telling her that as long as they didn’t find blood – there’s still hope for Sam and Callen.

As for Sam and Callen, there “escape” was too good to be true and eventually they came upon an electrified fence. And, knowing those two, they probably would have still tried to give the fence a go, in spite of the danger, but they were stopped when another victim revealed himself.

Yet, this other man claiming to be held against his will wasn’t exactly a new face to them. Apparently, Martin Samir is the same NSA analyst the guys were trying to find.

He disappeared a few weeks ago and somehow he broke out of his room the same time as Sam and Callen. Which ended up meaning that all three of them were now in this together. Or so the guys thought when they let Martin come with them.

Martin on the other hand was just a tad too happy about sneaking away from the guys to allegedly answer the call of nature. And there isn’t a person alive that is that happy to be using the bathroom outdoors!

And as for Deeks and Kensi, they found which truck the kidnappers used but they were given orders not follow up on the lead. Because, even though it’s their friends that’s missing; they had to follow Granger’s orders when he places them on a new op.

NCIS recently found an ISIS cell in LA and as they’re going about demolishing this cell – Sam and Callen are to be fostered off on different agents who barely know them. Hence, the odds of Sam and Callen being found have just been lowered. Though that doesn’t seem to matter in the face of such a large undertaking.

And as it turns out the guys could look after themselves. Not long after they found the real Martin Samir – they entered into a gun battle with the impersonator that’s been following this entire time.

It looks like the fake was planted in order for ISIS to find out about their rogue member’s upcoming meeting with Granger. But Sam and Callen had suspected “Martin” and so they gave him false information to pass on to his friends. So while “Martin” was leading known terrorists into a sting – Callen found a way to notify NCIS of where they could find some ISIS members.

And after that, the guys simply had to deal with “Martin”. Which turned out to be so bad because, thankfully, the impersonator made it easy for them by knowingly killing himself. And that was that.

The guys took out an ISIS cell and they didn’t even need their informant!