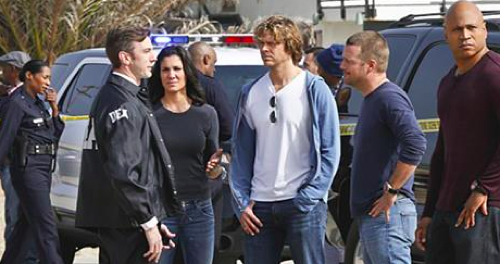 Tonight on CBS NCIS: Los Angeles continues with an all new Monday March 23, season 6 episode 18 called, “Fighting Shadows,” and we have your weekly recap below. On tonight’s episode, the team investigate when three FBI agents are killed in an explosion following a successful undercover sting operation.

On the last episode, when an Afghan soldier brought to America for DEA training was murdered, the OSP team found themselves tracking down his two comrades who had been targeted for the information they knew about the Afghan military.

On tonight’s episode as per the CBS synopsis, “the team investigate when three FBI agents are killed in an explosion following a successful undercover sting operation. Meanwhile, Deeks and Kensi realize Hetty knows about their relationship when she pairs Kensi with Sam, and Deeks with Callen during the probe.”

Several FBI agents are dead because of some faulty C4 they had borrowed from the D.O.D and now on tonight’s episode of “NCIS:LA” the Bureau is looking for someone to blame. Apparently the bureau was conducting a sting in which they planned on catching homegrown terrorist actually buying the C4 from an undercover agent but after the switch had been made and the terrorist were taken into custody – the C4 unexpectedly went off. After the agents had already reclaimed it. So the FBI wants to know who dropped the ball and got some of their men murdered in the process.

However an investigation into who had the C4 and what time was it transferred to someone else ended up revealing not a mistake but an intentional act. It seems someone purposely messed with the C4 and also planted a smaller bomb on the terrorist’s car. You see it was the smaller bomb that was remotely activated to go off when only the federal agents were around. Meaning someone merely wanted to blame the incident on the C4 instead of using.

The C4 would in fact have caused an even bigger explosion than what killed the agents. It was more powerful and in the wrong hands could have wiped out almost a whole city. So whoever targeted the feds did so in hopes of killing only them.

And thankfully it wasn’t that much of search in finding their culprit for it was revealed he wanted to be caught.

Vakeel Shah immigrated to the states from Pakistan almost twenty years ago. Since then his started his own garage and has paid all his taxes. But a few years ago he was forced to take his nephew in after the young man lost both of his parents in a car accident.

Vakeel loved Navid and then Navid was captured in a sting operation, set up by the FBI, and was taken down as a terrorist. So that’s what motivated Vakeel into creating this grand plan of his. According to Vakeel, his nephew was a confused boy and it was the FBI that had given a plan, showed him how to make a bomb, and they destroyed his life.

So Vakeel killed a couple of agents with one bomb. But there are other bombs out there and until he feels like the Bureau has learned its lesson about pushing young men into something they don’t understand – he’s willing to put the whole city in jeopardy.

Meanwhile at headquarters there’s something strange going on with Hetty. For some reason she’s decided to split up Kensi and Deeks for this operation. And that has something to do with this mystery woman that had been following them around.

The woman, as it turns out, was detective with Internal Affairs and she’s looking into Deeks.

She attempted to get information on him from Kensi but that didn’t work. And so she didn’t bother telling the other woman about why there was an investigation. Nor she did bother approaching Deeks rather than hiding in the shadows.

So no one knows what’s going on and the team is frazzled as it is trying to find Vakeel’s bomb. For it seems that in addition to having an agenda, their terrorist also borrowed some of the FBI’s methods. Vakeel had found some of their tactical plans online after a hacking group had released them and now he’s using their own maneuvers against them.

Meaning every plan the FBI came up with, to be used only for sting operations, he’s read. And now he’s using them.

He found a couple of kids, much like his nephew was in his mind, and he converted them to his cause. As if Allah was his cause. But Callen made Vakeel see what his actions really were.

This wasn’t about a lesson. This was about Vakeel’s pride. For it was him that raised a terrorist and it is his fault for not noticing his nephew’s extremism. So Callen begged Vakeel to give these kids, he had manipulated, a chance.
But Vakeel didn’t know how to get in touch with them. He purposely told them not to carry around cell phones in case it distracts them from their mission. So it was Sam that had to talk down two potential terrorists from blowing up FBI headquarters. And while he was able to do so – there really is no happy ending to this story.

Those young men will never be free again or see the light of day again and as for Vakeel, who was once decent man, he threw away his beliefs in order to exact revenge and that got him a prison cell right alongside his terrorist nephew.

So there is no silver lining. And as for Deeks, he claims not to be hiding anything but Hetty warned him that Internal Affairs weren’t just looking into him – they were on a hunting expedition. It seems they were going to use everything in his past against him so if he really is innocent then why do they want to take him down so badly?