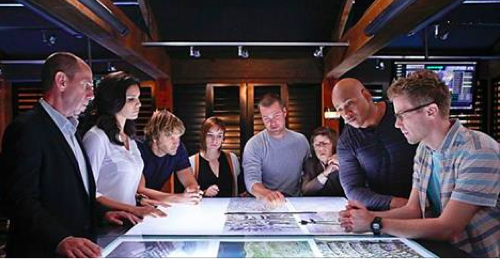 Tonight on CBS NCIS: Los Angeles continues with an all new Monday May 18, season 6 finale called, “Chernoff, K,” and we have your weekly recap below. On tonight’s episode, season 6 ends with the team traveling to Moscow where they assume multiple undercover identities to locate suspects in the case involving Arkady. Meanwhile, Callen [Chris O’Donnell] uncovers new information regarding his father.

On the last episode, Callen and Sam searched for answers when they found dead crew members from the missing oil tanker used in Arkady’s deal with Russia, and also discovered Arkady’s personal connection to the ship. Did you watch the last episode? If you missed it we have a full and detailed recap right here for you.

On tonight’s episode as per the CBS synopsis, “The case involving Arkady and his personal connection to an oil tanker now leads Callen, Sam, Deeks and Kensi to Moscow, where the team must assume multiple undercover identities to locate their suspects. Meanwhile, Callen uncovers new information regarding his father.”

The mission to rescue Anna Kolcheck is made that much harder when third players suddenly show up on tonight’s brand new episode of “NCIS: LA” .

Apparently there are men that want to kill Anna’s kidnapper. Ivan Karposev is a notorious criminal and to be fair he’s made a lot of enemies while creating a name for himself. So in all honesty its comepletely natural that someone somewhere wants him dead. Yet the third party are disrupting an active case. Because rather than actually being helpfully in finding young Anna – it seems that having even more people hunting him has made Karposev go further underground. Thus the NCIS team that just showed up in Russia would have been and for time felt like they were screwed.

But that’s only because Anna and her own certain skill set hadn’t been taken in account. See, Anna is more than Arkady’s daughter. Once she upon a time she was a cop. Then she quit the job in order to go work in the private sector that specifically worked towards Russia’s interest.

So, no, Anna wasn’t a typical kidnapped victim and she proved that when Sam and Callen eventually caught up with her and a dead Karposev.

And as for that touching reunion that was supposed to happen between father and daughter, as it turns out Anna kind of has daddy issues. Her father never raised her and it was his actions that led to her kidnap. Thus her first reaction upon seeing him was to attack him.

Anna hates her dad and Arkady wasn’t exactly being repentant. He gave her space and he didn’t appear to put up a fight when Sam dragged him away. If anything he’s been acting odd since he arrived in Russia.

While the team was looking for his daughter, he was making “conversation” with Hetty. And though he was supposed to help the team with their investigation – Arkday then began playing mind games with Callen about his father.

Callen thought his dad disappeared in the seventies yet Arkady is claiming something else. So is he finally telling the truth or has been setting Callen up for a fall?

Besides the pressing concern of finding out who his father was/possibly is, there’s also the men the team have to deal with. For it looks like Karposev had gotten mixed up with Isis. And Hetty is setting the guys up with Anna in order to deal with the problem.

Anna wanted a ticket to the states so Hetty made her deal. A fresh start and in return all she had to do was help the team find the boat that caused so much trouble. While stopping Isis in the process.

But Sam didn’t quite trust her. He was worried she would betray the team meanwhile his partner (the one he should have been worried about) was having Eric break into Russian Intelligence in order to get word on his father. If it was any other day that would have been risky but with men on the ground in Russia – what Eric was doing could have killed them all. And Sam ended up having to talk his friend away from a ledge.

Terrorist from around the world were all heading to Russia in order to buy ship that could fund a war. So, really, everyone’s daddy issues needed to be pushed aside. And that included Anna’s reluctance to work alongside her father.

The team set up a complicated sting to catch all the buyers and as for Eric, he went about to finding the ship from his computer back at the office. So score one for Tech. But the guys on ground ran into some problems.

A hail of gunfire eventually put a halt in finding everyone that had been looking to get their hands on illegal goods but some good did come out of it. Arkady had been injured while shielding his daughter. And for that act alone, she forgave him everything else.

However their newfound bond was put on hold when Arkady was too injured to be moved and was forced to stay in Russia while the rest of the team made a run for it.

But don’t worry about Arkady. Hetty says his special “friends” will get him out. Apparently he’s too important to them (and most of their illegal enterprises) to be locked away in a prison cell. So Hetty told her team to stand down on anymore rescue missions and ordered them to clear out.

It was time they all went home.

Callen though wanted to stick around for a little bit longer. For him, Russia held the answers he’s been waiting for his entire life. And he couldn’t simply give up when he’s gotten so close.

And maybe it was because of his actions (like his reluctance to leave) that Hetty ultimately lied to him. See she took him aside and told him that she had looked into his father. And according to her, the older man had died in 2008.

But the last scene of tonight’s episode showed Callen’s dad as very much alive.

And normally Hetty doesn’t make mistakes. When she says something its either the truth or its intentionally meant to get a job done.