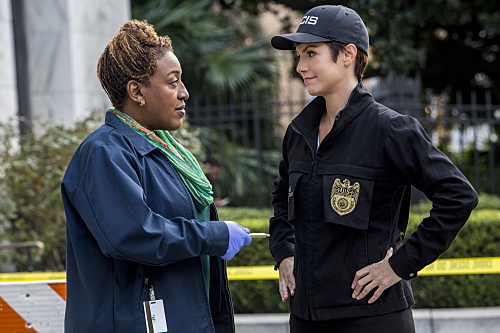 Tonight on CBS NCIS: New Orleans returns with an all new Tuesday February 10, season 1 episode 14 called, “Careful What You Wish For,” and we have your weekly recap below. On tonight’s episode, an NCIS agent is killed during a security detail for the Vice Chief of Naval Operations.

On the last episode a Navy lieutenant commander in impeccable shape turned to Pride and the NCIS team to solved his imminent murder after discovering he had been poisoned with a lethal dose of radiation. Did you watch the last episode? If you missed it, we have a full and detailed recap right here for you.

On tonight’s episode as per the CBS synopsis, “an NCIS agent is killed during a security detail for the Vice Chief of Naval Operations. The investigation focuses on whether it was an assassination attempt or if someone is targeting one of their own. Meanwhile, Brody is placed under investigation and her furtive past is reevaluated.”

Tonight’s episode looks like it is going to be great and you won’t want to miss it, so be sure to tune in for our live coverage of CBS’s NCIS: New Orleans at 10:00 PM EST! While you wait for our recap hit the comments and let us know how excited you are about this new season.

Agent Brody was on NCIS security detail when a fellow agent that was working alongside her was murdered. Agent Hackett originally came from New Orleans so just moments before he was killed he had been talking to Brody. And he was telling her he had specially requested to take this detail just so he could return home. But now he’s dead and on tonight’s episode of “NCIS: New Orleans”, his death is somehow being pinned on Brody. As if it was her mistake that led to his death.

It seems Brody has a history. Apparently, someone else had died the last time she was on security detail. So Brody’s every action, while on detail, is being thoroughly investigated. And in the meantime she’s has to answer questions about the prior case she messed up on.

The higher powers were going to take Brody off of Hackett’s case and yet, when it came time to answer questions or be there for her partner, Brody chose LaSalle. She initially went with him to question possible suspects. But eventually her bosses did find a way to derail her.

The security detail she had been on involved protecting an admiral. Admiral Pack had recently ticked off a lot of hardworking laborers. So, being a part of a union, they were holding protests when Heckett was killed. And the nature of those protests led to everyone to believe, at the time, that true target was the admiral. However that wasn’t the case.

Sebastian did some ballistics and it proved Heckett was the intended target. Though, no one knows why!

The agent was a pretty clean cut guy. There was literally nothing in his file that showed he was up to anything nefarious. Yet, his phone records did show he was heavily in contact with a Senator.

The Senator claimed to be an old friend of Heckett and in fact they were arranging to meet up while he was in the city. Hence the phone calls. It seems the Senator wanted to get his friend’s opinion about running for Governor.

And though the Senator couldn’t be much help – he did point the investigators towards a possible suspect.

David Mocus also went to school with Hackett and the Senator. But he was their “pot guy”. He would supply them with drugs and at first it was fine. Then somewhere along the way Hackett grew a conscious and he wanted to get David out of the gang he had joined. So he tried the tough love method. He had turn David in to the authorities.

And David hasn’t forgiven him. Though, he has put the past behind him. So much so that when Hackett came to him for a favor – he helped him out.

Hackett needed an unlicensed gun. He said he wanted something light and David surprisingly delivered. He gave Hackett the gun and Hackett in turn gave someone else the gun.

Hackett ended up giving the gun to a woman named Regan. She was yet another old face from his past. Only this time she needed a gun to possibly protect herself and her son from her husband. The very same husband that has both a hunter’s license and a very mean temper on him.

The husband was spotted on security cameras attacking Hackett.

But later when Regan’s body was found – her husband came in. Even though he was under investigation for her murder, he still came in because he wasn’t the one that had killed either Regan or Hackett. He just thought they were having an affair. Hence the reason he punched Hackett.

Regan has a son and he has a rare blood cancer. However Regan’s husband wasn’t a match for their so he thought Hackett must be the real father. And he wouldn’t have killed Hackett if the other man could have helped saved his kid.

Though, oddly, Hackett was proven not to be the father. Sadly, he was killed just because he knew who the real culprit was – the Senator.

The Senator was a star on the rise. So when Regan came to him and began asking for his help to save their son – he chose to kill her rather than expose an affair and secret love child that would have ruined his career. Yet he couldn’t merely stop with just Regan. He also had to kill Hackett who would have suspected him when Regan’s body was found.

So two people are dead and at the final moment the Senator chose to give his son the blood anyways.

And as for Brody, it came time for her to face her demons and this time she didn’t run away when the going got tough!