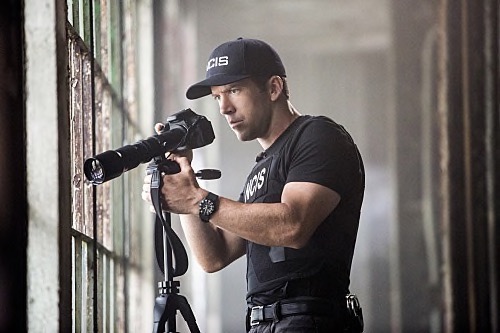 Tonight on CBS NCIS: New Orleans returns with an all new Tuesday April 28, season 1 episode 21 called, “You’ll Do,” and we have your weekly recap below. On tonight’s episode, LaSalle’s [Lucas Black] brother, Cade, turns to NCIS for help when he finds his girlfriend’s body in the trunk of his car. He claims to have no memory of the night before, but a mountain of evidence implicates him in the crime. The case is under the jurisdiction of Capt Jim Messier and Jefferson Parish, but that doesn’t stop LaSalle from trying to prove his brother is innocent.

On the last episode when a Navy Commander’s car was stolen with his baby inside, the NCIS team had to determine if this was a random carjacking or a targeted abduction. Did you watch the last episode? If you missed it, we have a full and detailed recap right here for you.

On tonight’s episode as per the CBS synopsis, “with no memory of the night before, Lasalle’s brother, Cade, turns to NCIS for help when he finds his girlfriend’s body in the trunk of his car. Despite a mountain of evidence that implicates Cade, and the case being under Captain Jim Messier and Jefferson Parish jurisdiction, Lasalle is determined to prove his brother’s innocence. Dylan Walsh guest stars as Captain Jim Messier of the Jefferson Parish Police Department.”

Tonight’s episode of NCIS New Orleans kicks off in Mobile, Alabama in 2001. Two young boys, are hanging out at a pond, Chris LaSalle gushes about a girl named Savannah that he is in love with to his older brother. Chris is lying in bed and reminiscing with Savannah about the chat he had with Caid, he invites Savannah to stay at his house and gives her an empty drawer to use in his dresser.

Chris’s phone rings and it is his brother Caid – he sounds upset and says he is in trouble. Chris and Savannah rush out in the middle of the night to find Caid – he is in an abandoned parking lot and cries that he is in trouble. He pops the trunk of his car and there is a dead girl inside.

Chris calls Pride for help – he rants to his boss that Caid has been on the up and up and taking his medicine. Pride yells that this is not their jurisdiction and he should have called the New Orleans police. The police arrive and Chris insists his brother is innocent – they take him down to the police station for questioning. Caid insists that he didn’t kill Wendy, he just found her dead in the trunk of his car. Caid explains that there was another guy in her life and she was scared of him – but she never told Caid his name. Chris and Pride watch the interrogation from the other side of the glass – Chris shouts that they should be looking for the other guy, but the cops aren’t buying it. Chris storms out and Pride convinces the cops to let his team help with the investigation.

In the morgue Merri and Loretta examine Wendy’s body – she was strangled from a rope and her necklace cut in to her skin. The charm on Wendy’s necklace is a symbol of a Voodoo God. Sebastian has the murder weapon – the deputies found it in a dumpster behind the scene of the crime. Sebastian says that he ran the prints on the ropes…they match Caid’s. The police barge in to the interrogation room and officially arrest Caid for Wendy’s murder.

Merri grumbles to Pride that they are wasting their time and she reminds Pride that Caid is bi-polar and was drunk the night that Wendy was murdered. Pride isn’t buying it – he says they need to find the mystery man that Wendy was scared of. Pride and Merri head to Wendy’s mom’s house to interview her, she says that she thought Caid was a phony when she met him and she knew he was up to no good. Pride asks Wendy’s mom if there were old boyfriends that she was scared of – she thinks they are stonewalling her but she agrees to give them a list of names.

Wendy’s ex-boyfriend Steve was arrested for throwing a bottle at her head, and she also dated a man named Joe – a truck driver with a rap sheet for assault and battery. Wendy also had a college boyfriend – but no one knows his name.

Chris wants to go talk to wendy’s ex-boyfriends but Pride tells him he has to sit this case out and sends him to go work on another case. It doesn’t go well with Chris but he has no choice. He heads out to the park to meet with their informant Percy, there is a gang that is stealing M-16 guns from the Navy, she shows him pictures of the guns. Percy has a sale set up with the gang tomorrow – she tells Chris that she needs him and his team to bust them.

At the lab Sebastian has the results from the toxicology reports. He reveals to Loretta and Pride and the police detective that Caid had a high blood-alcohol content, and his bi-polar disease meds. Sebastian admits that the combination of meds and alcohol could have caused Caid to black out or act violently.

Chris beaks in to Wendy’s apartment to search it, Merri heads over to try and stop him. While they are bickering about whether or not Caid is guilty they notice that their phones are full of static, after a brief search they find a hidden camera inside of Wendy’s house – it looks like someone had been spying on her. They run the serial number on the camera, and they learn the man that purchased it is named Reed and went to college with Wendy.

Pride meets Merri and Chris at Reed’s house, Pride scolds him for searching Wendy’s house and says that now the camera is inadmissable in court. Chris rants that Reed is a sex freak and has been arrested for stalking other girls. Pride and Merri head inside to meet Reed, he says that he was at a bachelor auction when Wendy was murdered. He gives Pride a copy of a video off the hidden camera and says that it has proof on it that Caid murdered Wendy. Pride watches the video and sees footage of Caid and Wendy arguing. Pride heads to the jail and questions Caid about the fight, he says that he and Wendy were fighting because she wouldn’t tell him the name of the guy that was stalking her. Caid breaks down and cries to Pride that he can’t remember what happened that night and he is beginning to wonder if he really did kill his girlfriend.

Percy picks Chris up so that he can do recon for the gun buy that she has set up. Percy has picked out a great spot for Chris to hide and take photos from – he is concerned because she is going to be way down on the docks and if something goes wrong he won’t be able to get down to her fast enough.

Sebastian looks over the video that Reed gave Pride and informs him that it was doctored – Reed deleted about three hours of footage before he handed it over to Pride. NCIS and the New Orleans police department head to Reed’s house with a warrant to get his laptop and see the original video. Reed tries to make a run for it when he sees the police and they chase him through the park with the laptop. They finally tackle him and manage to get the laptop back about ten seconds before an alligator ate it.

The New Orleans police bring Reed in for questioning – they get the video off from Reed’s laptop and see Reed and Wendy having a vicious fight. Merri accuses Reed of raping and killing Wendy and then framing Caid. Reed insists that he spent the entire night camped out at Wendy’s house and waited for her to come back – and she never did. They pull the video footage from the street cameras and learn that Reed was telling the truth, he has an alibi – he was sitting outside of Wendy’s house the entire time. Pride orders Merri to go back through everything in the case with a fine tooth comb, he thinks they may have missed something.

Chris Heads to the gun buy with Percy – she meets with the NavySgt and purchases the truck load of guns. He slams Percy against the truck and tries to rob her, but Chris comes to the rescue and arrests both of them so that he doesn’t blow Percy’s cover. Afterwards she thanks Chris for his help and wishes him good luck with his brother’s case.

Merri has a big break at the police station – she realizes that in the video she wasn’t wearing the Voodoo necklace that was found on her dead body. She looks through the database and learns that there were three other women found dead in New Orleans with the same necklace on. Loretta and Sebastian learn that they missed something in the toxicology reports and Caid was actually roofied as well as drunk – which means he would have been too high and weak to even strangle Wendy. Merri heads to the address of the witness for the last voodoo doll necklace murder. Chris and Pride realize that the bartender at the bar must have roofied Caid – they look up his address and realize that the bartender Kai lives at the same address that Merri just went to.

At the bartender Kai’s house he finds Merri talking to the woman that he lives with, who was a witness in one of his other murders – he pulls a gun on Merri. Kai and his girlfriend order Merri to get down on her knees and tie up her hands. Merri fights off Kai’s girlfriend and he runs off during the scuffle – Merri shoots and kills him before he has a chance to shoot her. Pride and Chris pull up and hear gunshots, they find Merri inside standing over Kai’s girlfriend’s dead body.

Caid is found innocent and released from jail – he heads to Wendy’s mom’s house and leaves her a bouquet of flowers. She rushes outside and thanks Caid for being kind to her daughter. Afterwards Caid thanks Chris for everything that he did for him – Caid says that he isn’t going home, he is going to visit their mother.