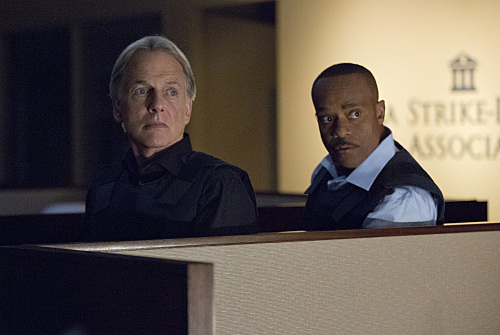 Tonight on CBS NCIS returns with an all new Tuesday October 13, season 13 episode 4 called, “Double Trouble” and we have your weekly recap below. On tonight’s episode, Vance (Rocky Carroll) partners with Gibbs (Mark Harmon) and returns to field duty.

On the last episode, a marine was murdered at Quantico hours after calling Gibbs to discuss a possible case. Bishop and McGee went undercover as a married couple to run surveillance on a marine lieutenant and his wife. Did you watch the last episode? If you missed it, we have a full and detailed recap right here for you.

On tonight’s episode as per the CBS synopsis, “Vance partners with Gibbs and returns to field duty when a murder is connected to a former NCIS agent he locked up years ago for stealing evidence.”

Tonight’s episode looks like it is going to be great and you won’t want to miss it, so be sure to tune in for our live coverage of CBS’s NCIS at 8:00 PM EST! While you wait for our recap hit the comments and let us know how excited you are for this season 13 episode 4.

The body of Navy Seaman Apprentice Brian Dokes was found in the early afternoon. Though nothing about the scene or their victim seemed to make sense to the NCIS. That is not until a mysterious third party put everything perspective.

At the start, Dokes’s body was found near his car which appeared to have been involved in an accident of some kind. However Dokes had enough strength in him to drag himself away from the car and was still struggling to move when someone decided to finish off the job that car could not. He was killed but what became blatant clear is that someone wanted to make a message out of Dokes’s death seeing as his killer went to extra lengths to gorge out Dokes’s eyes.

Yet the brutality that was used on the victim was not the only red flag at the scene. There was also the box of dud grenades that Dokes had in his trunk. As well as the bag of cash that he had in his front seat with him. So, right away, Dokes was looked on with suspicion.

On paper, he came across as a good guy but it was apparent that he had crossed a line. There was no way a kid that young could come across fifty grand legally.

And he didn’t. Though it took former NCIS Special Agent Mr. Kip Klugman to fill Gibbs on what really happened to his victim. Klugman was not only a former agent but he was a disgraced one on top of it. Towards the end of his career, he began pilfering money and drugs out of the evidence locker and his partner at the time was the one to turn him in.

But Director Vance has come a long way since he was a NCIS Special Agent and it’s made him more circumspect about who trusts. So he didn’t want Klugman to offer up any assistance to Gibbs and, after hearing what the other man had to say, he didn’t even think the intel was worth allowing Klugman to make a deal. For that was the only motivation behind Klugman’s altruism.

He had told both men about a man named Kobe Carver who ran an illegal loan shark business with a lingerie store as a front. And he told them that Dokes had robbed Kobe the night before he was killed. Though the reason Klugman was being so forthcoming was because he owed Kobe money. And if Kobe went away for murder then all three knew Klugman wouldn’t have to pay him.

So Klugman wasn’t a reliable source and he would have wanted his own illegal gambling to be overlooked.

That’s why Vance ultimately decided to turn down Klugman’s offer and simply leave Gibbs’s team to find out what happened to Dokes. And using their information about Kobe, the agents did go to interview him at his “shop”. However by then Kobe had already called in his lawyer and hid all evidence of his betting hall.

Meaning the agents had nothing to use as leverage. But they did know they were looking at the right man. Kobe had a reputation for always getting those that have foolishly tried to turn against him. And later that day Vance opened his door only to find a bloody Klugman on the other side of it.

Though oddly Klugman was claiming it was Vance that beaten him up and he informed NCIS that he would be suing thanks to his new layer. The same woman that was representing Kobe. So just like Vance predicted – Klugman turned out to be an unreliable snake.

And because of Klugman’s latest antic, Vance found his job suddenly being threatened. Madame Secretary paid him a special visit and she told him that the bruises and the lawsuit didn’t look good to Washington. Therefore the possibility of Vance peacefully retiring was put on the table.

Only there was no way that Vance was going to go quietly. Nor for that matter was Gibbs going to allow the Dokes’s case getting transferred to another unit. So both men decided to continue with their investigation despite what was in their best interest. And in the end Madam Secretary allowed them a deadline before they both got pulled away.

NCIS figured out there was no second person at the original crime scene with Dokes. In fact Dokes had been the one to scratch out his own eyes and that was because of the LSD in his system. The drug has been known to cause vivid hallucinations and Dokes had had a large amount of it show up in his blood. But the team came to realize that Dokes would have never willing put drugs in his system.

His father was a drug addict and, after the state wide service couldn’t help, Dokes somehow found a way to get his father into an expensive private clinic. The young man had used his joining fee from the Navy to make the initial down payment for his father but the final payment was coming due right around the time Dokes was about to go on his first overseas mission.

So that’s why Dokes stole from Kobe but it seems like he wasn’t the only one with the idea. There was a tracking device found in the bag of money. And when Tony used the device as proof the money belonged to Kobe, Kobe was furious about someone putting a device into his bag.

And that was about as close as Kobe was going to admit to secretly drugging Dokes. As for the tracking device that wasn’t his, it had also led the agents to the drugs that Kobe used as well as identifying Kobe as the man that sold Dokes’s father the same drugs the older man got hooked on. Which meant the agents could get Kobe for murder. Though Vance wanted to know how Klugman came into all of this and a sting operation was the only thing left to do in order to find answers.

The team left the tracking device in the bag and when the money was getting transported – it got hit. But luckily Gibbs had put his cell phone into the bag so his agents were able to track the money until they found Klugman and his friends counting all the cash. For it looks like that was Klugman’s endgame all along.

He wanted to steal from Kobe but Dokes beat him to it and everything afterwards was just about getting close enough to the money for a second attempt at taking it for himself.

So Vance was able to clear his name once he brought Klugman in on charges including attempted murder on a federal agent. (It’s not like Klugman was going to let anyone arrest him without a fight.)