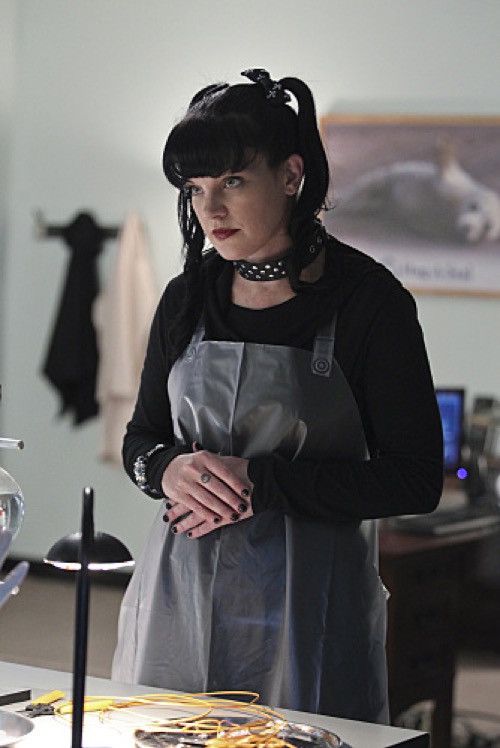 Tonight on CBS NCIS returns with an all new Tuesday October 20, season 13 episode 5 called, “Lockdown” and we have your weekly recap below. On tonight’s episode, Abby (Pauley Perrette) is held hostage when armed men take over a pharmaceutical lab.

On the last episode, Vance partnered with Gibbs and returned to field duty when a murder was connected to a former NCIS agent he locked up years ago for stealing evidence. Did you watch the last episode? If you missed it, we have a full and detailed recap right here for you.

On tonight’s episode as per the CBS synopsis, “while visiting a pharmaceutical lab on a murder case, Abby is trapped with no communication to the outside world after armed men take over the building and hold everyone hostage. Tony Gonzalez, former NFL player and studio analyst for The NFL Todayon the Network and contributor for Thursday Night Football, guest stars as NCIS Special Agent Tony Francis.”

Tonight’s episode looks like it is going to be great and you won’t want to miss it, so be sure to tune in for our live coverage of CBS’s NCIS at 8:00 PM EST! While you wait for our recap hit the comments and let us know how excited you are for the season 13 episode 5.

Gibbs’s makeover has inspired Abby this week. Subsequently she wants to trade in her lab in the basement for something with a view. And HR was fighting her on that decision. So Abby was going to ask Gibbs if he could help but in a polite yet Gibbs way he had to blow her off.

A dead Navy captain required his attention and honestly he didn’t want to get into office politics because of a view. So Abby was stuck in the basement and her friends were out investigating Navy Reserve Captain Doblin’s death. Doblin had apparently been murdered by someone crushing his trachea and whoever the murderer was also had extensive knowledge of the claw grip. The claw grip was eastern technique that could be considered Kung Fu and what it did was kill someone using only three fingers.

Thus this case got to be very interesting for the guys back at the office. However their victim ended up sending up some red flags. He had a half of a compound found in a drug sold by Celodyne Pharmaceuticals in his system and he had vials of neurotoxins in his digestive system. Which is typical for drugs mules, but at the time, the team was more worried about why he had the neurotoxins because it might have explained why he was murdered.

Though Abby had used that compound in the victim’s system as an excuse for a field trip. She eventually got Gibbs to say he’d try to see what he could do about her office situation but she didn’t a second more in the basement. So that’s when she came up with the field trip idea and went to go meet Dr. Brown at Celodyne Headquarters.

Dr. Brown proved to be someone that took after Abby’s own heart and the two women hit it off right away. However Brown didn’t know how or why a testing compound much less half of one was found in the victim’s system. And the two women were left discussing that mystery when all of sudden the labs experienced an emergency shutdown.

Brown said the Ebola department must have had a leak so the ladies were simply going to wait out. But there wasn’t a leak and the women quickly realized that when they began to hear gunshots in the building. The janitors it seemed had set off the alarm in an attempt to rob the place yet they hadn’t counted on Abby, a federal agent, being in the building.

So Abby knew she had to send out a message to Gibbs but she was also a wanted woman. The janitors didn’t want her to live to tell the tale and Dr. Brown was too scared of dying to stand beside her new friend. Even when it mattered the most.

Therefore Abby had to escape the lab on her own and thanks to her own ingenuous she was able to alert Gibbs. And in return, Gibbs had told her to hide. He said he and the team were coming her way and that she shouldn’t risk her own well-being.

Yet Abby had to. She knew the bad guys wanted something off the server and so she locked them out in hopes of stalling them. And that came back to bite her.

The janitors knew that it was Abby that had locked them out and, although she had returned safely to Dr. Brown’s lab, she had unfortunately put other people at risk. The bad guys were demanding she let them back into the system. They sent out a message over the intercom and they told her that if she didn’t fix what she did then they were going to start killing hostages.

Only Abby had already overheard their endgame. While she was locking them out of the system, she stayed long enough to hear them say they weren’t going to be leaving any witnesses behind. So that meant it was part of their plan all along to kill the hostages and Abby made sure to send up a red flare to the NCIS agents watching the building.

Red Smoke means distress in naval code so Gibbs and his people knew that the situation was deteriorating fast though they hadn’t known the details. Like how Abby told the bad guys that they could have her if they came and got her.

And that wasn’t such a bad idea. Abby got the men to collect her and Dr. Brown who had suddenly found courage and the two women were in the server room when Abby had automatically locked the doors. When she was supposed to be letting them into the system.

Abby you see had come up with a plan. She wanted to save the hostages and so she set off a knock-out gas inside of the room thereby taking out the man in charge. A man named Travis Cook.

Though Abby wasn’t entirely left pleased by what she stopped. She did save the hostages and the NCIS team were able to revive everyone inside of the room but sadly it was revealed that Travis Cook had been hired by Dr. Brown to break into the servers. It seems the company she works for has been selling generic drugs that don’t work so she wanted to turn whistleblower.

However she didn’t have enough evidence and not even the chemist that first brought the company’s crimes to her, Doblin, knew how to stop the company. So they hired Travis and as payment they told him he could take whatever he wanted on the server for himself. But then Travis got idea and he started killing people including Doblin who knew who he was.

So Doblin and Dr. Brown were good people and they put their faith in the wrong person. And though Brown tried to later stop Travis, she’s still going to jail for the part she played.