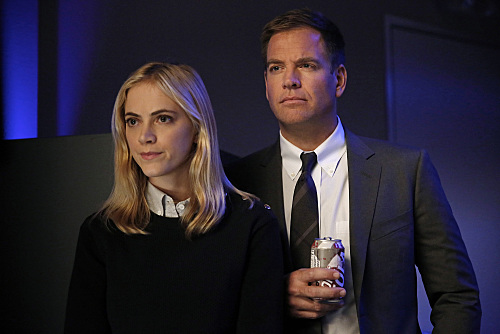 Tonight on CBS NCIS continues with an all new Tuesday January 6, season 12 episode 11 called, “Check,” and we have your weekly recap below. On tonight’s winter premiere episode, the NCIS team investigate a series of crime scenes that appear to be copycats of previous cases. Meanwhile, two of Gibbs’ [Mark Harmon] ex-wives show up at a crime scene to discuss something important with him.

On the last episode, the NCIS team consulted with three cyber-terrorists they imprisoned after a city-wide Internet shutdown the week before Christmas. Also, McGee reflected on the case and Gibbs’ infamous rules as he penned a heartfelt letter to his father. Did you watch the last episode? If you missed it, we have a full and detailed recap right here for you.

On tonight’s episode as per the CBS synopsis, “the NCIS team must investigate a series of crime scenes that appear to be copy-cats of previous cases. Also, two of Gibbs’ ex-wives, one of which the team has yet to meet, show up at a crime scene to discuss something important with him.”

A peculiar incident has drawn the NCIS team’s notice on tonight’s episode of “NCIS”. It seems that several naval personnel were drawn into a Mexican shoot-out but for the life of them no one can figure out why. None of the officer involved appeared to have known each other beforehand. In fact they don’t even have anything in common except for their tax records.

All five soldiers owed back taxes and each other them recently came into contact with the same tax firm.

But that’s not what Gibbs is worried about. While he was at the crime scene, two of his ex-wives decided to pay him a visit. Diane who everyone knows already and Rebecca who’s been a bit of a dark horse. Rebecca was ex-wife number two and she’s the same ex Gibbs caught in bed with another man.

So what could these two women want with him? Well, they’ve oddly become friends (something Gibbs didn’t know about) and now Diane wants Gibbs to talk to Rebecca for some reason. She also threatened Gibbs if he tried to get out of it.

Which he did. He made them think he was going to wait around for them at NCIS headquarters but then a run for it after the case looked like it was going nowhere. Though Gibbs hadn’t counted on Rebecca following him back to her house.

When she said she had to talk to him – she actually she meant she had to. Apparently, making amends is part of the program. She used to be an addict until she bottomed out over a year ago and checked herself in. So now she wants to apologize to Gibbs for cheating him while she was under the influence.

And Gibbs is Gibbs. He tends not to hold any ill-will against people and he quickly forgave her when he saw her remorse.

However, things changed after that. It seems the two of them had stayed over at his house and essentially talked themselves to sleep. So when Diane showed up the next morning looking for them – imagine her surprise and her wrath when she found them cuddled up together on the couch.

Diane wanted an explanation for what happened the night before but Gibbs wanted an answer as to why he was dealing with her so early in the morning. And he also wanted to know why McGee brought one of his ex-wives to his house.

And seeing as McGee didn’t want to antagonize an already upset boss – he followed orders. When he and Diane were back at headquarters, she found something in all of the victim’s files. She found out someone had hacked into their tax records. It looks like someone was specifically looking for people that had problems with IRS.

And whoever it was probably lured the victims in by offering their service to help clear up any issues thee people had with paying their taxes.

Abby later found out the shoot-out wasn’t what it looked like. Someone had killed all five naval officers and then arranged it to make it looked they killed each other. But the way he arranged them was significant.

The real killer had arranged the crime scene to copy an earlier scene that involved Gibbs. And the five people dead simply wasn’t enough of a message because their killer was far from done with his killing spree.

Another victim, again a copy-cat, showed up. And that time Gibbs couldn’t say it was an accident. The latest murder was another replay of a scene from Gibbs’s past.

So there was really only one suspect the team were looking at when everything began pointing someone deliberately gaslighting Gibbs – his ex-wife Rebecca. She arrived at convenient time and everyone knows Gibb’s rule. They are no coincidences!

Evidence was pointing towards Rebecca but Rebecca swore someone was setting her up. And though no one wanted to be the first to believe her – Abby did a quick search on Rebecca’s phone and found out that someone had bugged it.

Rebecca and Diane have been texting nonstop about their visit and that when the killer probably got the idea to frame her. Yet, he had a different plan in mind when it came to Diane.

Abby traced the bug that was planted on Rebecca back to Sergei Mishnev. Though they couldn’t find him when they looked and Gibbs ended up taking a few minutes for himself. He had gotten a cryptic text from Diane and so he had followed up on it thinking she was just being dramatic.

But Diane hadn’t sent him text. That was Sergei. Sergei lured both Gibbs and Diane to the roof because he wanted Gibbs to watch someone he cared for die in front of him.

It was a cruel though Sergei’s message implied he was only returning the favor. He said Gibbs took his family and now Sergei was doing the same to him!

And though Gibbs went after him, Sergei and his men got away before they could be apprehended!