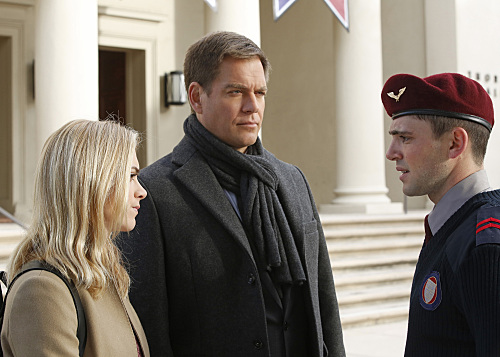 Tonight on CBS NCIS returns with an all new Tuesday February 10, season 12 episode 14 called, “Cadence,” and we have your weekly recap below. On tonight’s episode, DiNozzo [Michael Weatherly] returns to the military academy he attended as a teen after a murdered Marine, who was an alumnus of the school, is found clutching the photo of a current student. Meanwhile, Bishop and her husband invite Gibbs [Mark Harmon] and the team for a special dinner.

On the last episode, Gibbs and the team investigated when a Navy lieutenant who was set to be the first openly gay service member to receive the Medal of Honor was murdered. Also, as his wife’s due date approached, Palmer prepared for fatherhood with a NCIS baby shower. Did you watch the last episode? If you missed it, we have a full and detailed recap right here for you.

On tonight’s episode as per the CBS synopsis, “DiNozzo returns to the military academy he attended as a teenager after a murdered Marine and alumni of the school is found clutching the photo of a current student. Also, Bishop and her husband invite Gibbs and the team out for a special dinner.”

Tonight’s episode looks like it is going to be great and you won’t want to miss it, so be sure to tune in for our live coverage of CBS’s NCIS at 10:00 PM EST! While you wait for our recap hit the comments and let us know how excited you are about the new season.

The body of a dead marine was found in the local park on tonight’s episode of NCIS. However initial reports indicate he was killed elsewhere and was dumped at the park. So not only does the team have to figure out why someone would go through the trouble of moving a dead body, but they also have to investigate the picture their victim was clutching onto at the time of his death. Apparently, whatever the picture is, it must have been really important to their victim if he managed to hold onto it during a possible struggle until eventual Rigor mortis settled in.

Though, Ducky later concluded there was actual no struggle or at least signs of one anywhere on their victim’s body.

So a highly skilled marine was literally taken down without a fight a fight. Yet the strange behavior doesn’t end there. An investigation in Wallace’s last few days revealed their victim had been acting strangely for quite some time.

It seems he’s been acting off ever since he got a call from his old military academy. So Gibbs assigned Bishop and DiNozzo to go check this school out. And, well, DiNozzo didn’t want to go. In fact he tried to get out of a direct order just so he wouldn’t go.

Back in his wild teenage days, DiNozzo was forced to go to military school after he kept getting kicked out of boarding schools. His father had mostly given up on everything else and with an out of control the older DiNozzo looked at Military school as a way to shape Tony to a hopefully responsible if not mature young man. And that’s exactly what ended up happening.

Tony was a model cadet. He had even gotten onto the dean’s list. So his apprehension about returning was really uncalled for.

When he and Bishop showed up at the school, his former coach welcomed him. And he also sung DiNozzo’s praises. But the agents hadn’t showed up for a social call. They had earlier found a connection between Wallace and one of the other students. Yet that proved to be a dead end when the person they came to talk to was sadly confirmed dead several days ago.

Cadet Christine had hung herself in her dorm room and it looks like Wallace was her boyfriend. So, after one of their friends informed him about what had happened; he then allegedly said several things that would lead others to believe he was going to drink himself under a rock. Meaning he could have been looking or a fight and had eventually found one that lead to his death.

But an informant contacted DiNozzo saying he knows what really happened to Christine and Wallace. So, even though they were on the road home – DiNozzo and Bishop turned around and drove back to the school. Which meant they left their guests at the restaurant waiting for them. And at any other time that wouldn’t have been such bad idea.

Though things changed after Diane died!

Bishop and her husband had invited her coworkers out to dinner in order for them all to get to know each other. Hence, when Bishop and DiNozzo pulled out – the dinner winded down to just Gibbs and Bishop’s husband. But instead of simply having a few beer before they called it a night – Gibbs started asking the NSA agents a couple of pertinent questions. And he must have done so with Diane in mind.

Meanwhile, Bishop and DiNozzo learned about the Honor Core. Unfortunately, DiNozzo thought the Honor Core had been disbanded when he was still a kid. So he did not in no way connected the Honor Core with Wallace’s case when he should have.

Honor Core is comprised of senior cadets basically terrorizing other cadets they feel were lacking. And one of these Honor Core guys went too far with Christine.

Christine had turned a guy down and he had used Honor Core to stalk. He even followed her home during their winter break. So when Wallace found out what was really going on –and what had made Christine kill herself – he went back to the school intent on taking down Honor Core.

However a teacher stopped him from beating up a student. So, afterwards Wallace took his car and went to meet up with his mentor. His mentor had been the one to offer him a scholarship to the school so Wallace thought it best the other man know about his plans.

It seems Wallace was going to tell the world about Honor Core and when his mentor learned what he was going to do – he killed Wallace rather than let the truth about the school and his legacy come out.

Gibbs arrested their killer as he was trying to clean up Wallace’s blood. And even though justice was soon carried out – DiNozzo doesn’t feel the same way about school as he used to.

Christine and Wallace’s story has made him let go of the past!