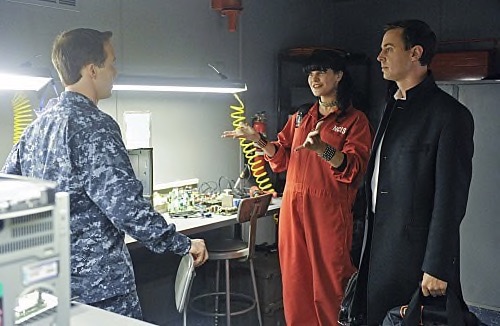 Tonight on CBS NCIS returns with an all new Tuesday March 31, season 12 episode 19 called, “Patience” and we have your weekly recap below. On tonight’s episode, a petty officer’s murder produces a lead in a 40-year-old airport bombing cold case that Gibbs [Mark Harmon] and DiNozzo [Michael Weatherly] have been assigned to for the past two years.

On the last episode, after the body of a thief was found in a Marine’s house, NCIS discovered the calling card of a terror group Delilah and the Department of Defense had been tracking. Did you watch last week’s episode? If you missed it, we have a full and detailed recap right here for you.

On tonight’s episode as per the CBS synopsis, “A petty officer’s murder produces a lead in a 40-year-old airport bombing cold case that Gibbs and DiNozzo have been assigned to for the past two years. Meanwhile, McGee gets jealous that he was not previously involved in the case.”

Tonight’s episode of NCIS kicks off with a couple of prostitutes standing on a dark street corner arguing over whether or not Pluto is a planet, a man in a black car pulls up. One of the girls climbs in the car, her friend think that he is just a john. Once she gets inside it is revealed that she already knows the guy – she whines that he is supposed to be protecting her and her family. He reassures the girl that she is safe, and then a car pulls up next to them and opens fire and shoots them both dead.

NCIS show up to investigate the crime scene. Tony is supposed to be in Atlantic City but he shows up and surprises McGee and says that Gibbs wanted him to help him. The man in the car is petty officer Daniel Harvey, and the woman that was shot and killed goes by the name Lolita. Bishop takes Harvey’s Navy ID and runs it through the database – she is shocked when there is no match. There is no record of any Naval officer named Daniel Harvey – they think that it may be a fake ID.

Back at the office McGee runs the license plates on the car that Harvey and Lolita were in, he says that it came back as an operation named “Lex Tarlionas.” When Tony hears the name he runs upstairs without saying a word, Gibbs follows behind him. McGee and Bishop are baffled, they don’t understand what is going on. They follow Gibbs and Tony upstairs and see that they went in to a restricted room. McGee tries to get in to the restricted room – but they have been locked out.

Inside the restricted room Tony and Gibbs are video-chatting with a Navy officer – they demand to know what the hell is going on. Why is there a man running around under their operation name – and with no record in the Naval database. The officer agrees to look in to it and says that it is time for Gibbs to brief his team.

They sit down with McGee and Bishop and fill them in on Lex Tarlionas. In 1979 there was bomb that went off at Metropolitan Airport and killed nearly 100 people. They never found the bomber, but two years ago they found a bomb in Colombia that was made by the same person as the 1979 bombing. Admiral Tyson created an op to find the bombmaker and named it Lex Tarlionas. They have a suspect, Thomas Orlando, a former drug king pin in Columbia. They have been searching for Orlando to get a DNA match to confirm he is the bombmaker for the last six months. It can’t be a coincidence that a Naval officer was operating under the name Lex Tarlionas and had a Columbian woman named Lolita in his car.

Abby is working the car for evidence, she finds fingerprints to a man named Eddie – and he has been arrested for pimping out women multiple times. They think that Eddie was Lolita’s pimp, her friend said that she was fighting with him the night that she was killed.

Gibbs gets a call from the Naval office, they have information on Harvey. Apparently he is a naval officer and his real name is Louis Freston. He specializes in intelligence, and he brought Lolita to the United States as a criminal informant. Lolita was giving Freston a hair sample from Thomas Orlando and it was going to tie him to the bombing. Apparently Lolita had the hair sample in her purse when she was shot and killed – McGee pulls surveillance video from the shooting and they realize that before the police arrived Lolita’s pimp Eddie showed up at the scene and stole her purse. The Admiral tells Gibbs that him and his team need to get the purse back and the hair sample so that they can make a move on Thomas Orlando while they know where he is – they only have 12 hours to get the DNA confirmed.

Ducky gets a lead during his examination of the bodies – he finds a small tattoo on Lolita. It turns out that Eddie brands all of his prostitutes. They tracked the tattoo down to a parlor in town. McGee and Tony head to the tattoo parlor to see if they can find Eddie. They get lucky and the tattoo artist at the parlor turns out to be Eddie himself. Eddie and McGee find the purse in Eddie’s trunk with the DNA sample and they bring Eddie in for questioning. Tony rushes the DNA sample to Abby to see if she can match it to Thomas Orlando and pin the 1979 bombing on him.

Gibbs heads in to the interrogation room to talk to Eddie. Gibbs shows Eddie pictures of Lolita’s dead body and demands to know how long he has been working for Thomas Orlando. Eddie insists that he doesn’t know Orlando, and he had no idea there was DNA in the purse. Eddie explains that Lolita tried to quit, and he found out that she was working his turf so she took her purse after she was killed to send the other girls a message.

Abby finishes her DNA sample and Thomas Orlando is the 1979 bomber. There are Navy Seals in position in Columbia and ready to take down Orlando as soon as Gibbs gives the the go ahead that the DNA matches. He contacts the Navy Seals and tells them that everything is a go – they rush the building where their informants say that Orlando was staying and it is abandoned. Someone tipped off Orlando – or else their intel was wrong.

Gibbs is furious, he contacts the ambassador and demands to know if she alerted the government of Columbia that they were making a move. The Navy Seals recovered a smashed laptop in Orlando’s compound – Gibbs says he will send some of his team to meet with them in Columbia and help with the encrypted computer. Meanwhile, the DNA sample that they got pulled up another match, apparently Orlando has a niece named Dr. Soto in Baltimore that runs a family therapy office.

Bishop and Tony go undercover as a married couple to a parenting class at Dr. Soto’s office, so that they can get a copy of her hard drive off her computer. When they arrive they learn that they actually showed up at the wrong time and they are attending a couple’s intimacy class. Dr. Soto convinces them to join in their intimacy circle, Gibbs and the rest of the team watch from the office and try not to laugh as Bishop and Tony are forced to “look in to each other’s eyes.”

Abby and McGee arrive in Columbia, Sargent Hankos briefs them on the laptop. He says that they are too late and he already cracked the code on the laptop. Abby convinces him to let her take a look at the computer anyways. Meanwhile back at the office Gibbs is in for a shock – Thomas Orlando shows up and turns himself in. He tells Gibbs and his team that he is “Seeking asylum from the United States.”

Bishop and Tony head in to the interrogation room with Thomas Bishop – he demands to know what the status of his asylum is. Tony tells him that the asylum is not available for drug dealers and terrorists. Orlando says that he is a freedom fighter and he is fighting against the Columbian government, not the American government. Thomas says he didn’t bomb the airport in 1979, he insists he was framed. Lolita’s family told him everything after she was shot and killed – he came to the NCIS because he has a family and he doesn’t want his children to be hurt by the Americans or the Navy. Thomas says that he was going to retire anyway so he doesn’t mind going to prison for a bomb he didn’t make – if it means that his children are safe. Then he scoffs to Gibbs that whoever really made the bomb is “playing him like a fiddle.”

Palmer and Ducky are in the lab trying to figure out how to use Abby’s equipment and re-check the bomb DNA and make sure that it is a match to the Thomas Orlando they have in custody. It turns out that he is telling the truth and someone was really framing him. In Columbia Abby gets a lead on the laptop – it turns out that Ambassador Edmonds was lying to them and she had spyware on Thomas Orlando’s laptop. Gibbs sits down with Edmonds, she admits that she helped set Thomas Orlando up and framed him – but only because someone threatened her and forced her to do it. She says that a drug dealer she knew 30 years ago told her that if she didn’t frame Orlando for the bombing then he would kill everyone she cared about. McGee demands to know who the man is that framed Orlando and bombed the airport – she confesses that it was a cartel leader named Armand Luna. The Navy sends out a drone attack on Luna’s compound in Columbia and they successfully take him out – justice is finally served after nearly 40 years.