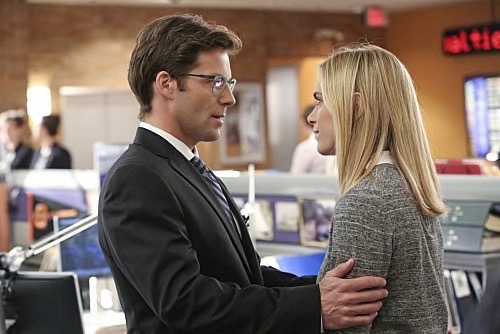 Tonight on CBS NCIS returns with an all new Tuesday April 28, season 12 episode 22 called, “Troll” and we have your weekly recap below. On tonight’s episode, Special Agent Ned Dorneget from NCIS cyber operations assists the team when an ensign who worked in the Office of Naval Intelligence is murdered. Meanwhile, the team learn that Jake and Gibbs [Mark Harmon] have become good friends.

On the last episode, Gibbs and Bishop traveled to Afghanistan after the murder of a Marine in D.C. was linked to a terror group holding another Marine hostage overseas. Also, DiNozzo was upset that McGee was chosen to be the new face of NCIS for all recruitment brochures.Did you watch the last episode? If you missed it, we have a full and detailed recap right here for you.

On tonight’s episode as per the CBS synopsis, “Special Agent Ned Dorneget from NCIS cyber operations assists the team when a Navy ensign who worked in the Office of Naval Intelligence is murdered. Also, the team discovers that Jake and Gibbs have become good friends.”

Tonight’s episode looks like it is going to be great and you won’t want to miss it, so be sure to tune in for our live coverage of CBS’s CSI NCIS at 10:00 PM EST! While you wait for our recap hit the comments and let us know how excited you are about this season.

A Naval officer, miles away from home, accidentally drives through a restaurant and dies. Now, that seems pretty clear cut on tonight’s episode of “NCIS” but, with this particular officer, the special agents assigned to the case can’t take the risk. And so they have to properly investigate this and determine if it really was an “accident”.

Ultimately, Jeanine was more than just another officer. She was also a cyber-warfare engineer. Practically, the youngest in her field. So Jeanine was truly gifted and because of that her absence will be missed by the department.

Yet there appears to be some confusion about what Jeanine could have possible been up to leading her to death.

The officer had gone “dark” several weeks ago however she didn’t come across as being on a mission nor does her superior knows if she was working on the side. If anything it kind of seems like she was trying to have a normal life away from her Navy job. For example, she took to volunteering to coach an all-girls basketball team and according to her fellow coach she was almost always there in the gym till the very last second.

So there is a chance that she could have simply have burned out. But, though that could be a reasoning; it doesn’t explain why someone would have wanted to kill Jeanine.

Both Ducky and Abby found evidence of a murder. So Jeanine’s death wasn’t an accident. In fact someone waited for her in her car and made her drive with a knife at her throat. Meaning her “attack” wasn’t something random. It well thought-out and carried-out plan.

Jeanine tried to run a red light and free herself and in return someone slit her throat before she could get help.

And then later, just as the agents were getting somewhere in finding out what Jeanine had been doing – they were told to stay within their jurisdiction – by the NSA. Apparently, their chief suspect is protected by the other agency and Director Vance was told to back off. However Bishop didn’t want to it let go.

She’s changed since she killed someone and for some reason that has made her even more aggressive than normal. And that includes when she’s with her husband. Because she did end up confronting him about the suspect.

Jake, though, refused to tell her what she wanted to know and so that created an issue between them. One that neither wanted to address because, at the time, they both felt like a line had been crossed.

Bishop wanted her husband to pick her over the job. And, who knows, maybe her cold silences was what wore him down. Because it wasn’t until Jake went behind his agency’s back to eventually help NCIS that investigation was able to pick up where they left off.

That’s what everything is really about – getting justice for their victim!

Jeanine has accessed Korkmaz’s computer from her own home. So the agents needed to know why she would do that but, as it turns out, Korkmaz was as clueless as they were. And it seems he had no idea why either NCIS or NSA would be looking at him.

But, it seems that both agencies were actually in the wrong. As in they suspected the wrong person of radicalism.

Korkmaz’s teenage daughter was the one that had gone behind his back to use his computer. See, it was his work computer and so she wasn’t allowed to do that. Yet, did it anyway. And, well, one thing led to another and she was invited to a chat room that wanted to talk her to about her “true” calling.

Things were a first but the teenager didn’t like where things were going. So she tried to leave the chat room and that’s when the threats began. Other kids, ones she knew or could connect in some way, reached out to her and tried to bully her into rejoining. And when they wouldn’t take no for answer she then turned to her coach for help.

Jeanine had said she knew computers so she volunteered to block these people from trolling one of her girls and sadly that action is what led to her death.

The “chat room” was actually a forum for terrorist recruiting teenagers. And when Jeanine interfered – that left her marked for death. But there were other kids in that forum.

And though Gibbs tried to save a young Bradley – the teenager was too far gone and nothing could stop him from being a suicide bomber.

So now two people are dead and still no one has found the head of the snake!