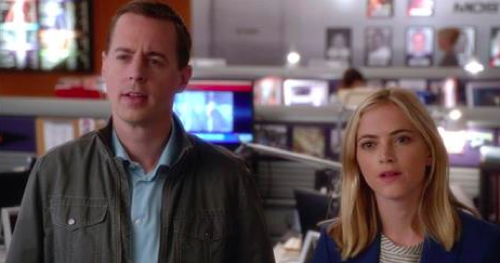 Tonight on CBS NCIS returns with an all new Tuesday September 29, season 13 episode 2 called, “Personal Day” and we have your weekly recap below. On tonight’s episode, NCIS assists a DEA agent on a drug-running case that keeps going cold, after Gibbs (Mark Hammon) agrees to help a friend who shares a tragic past.

On the last episode, Season 13 began with Gibbs fighting for his life aboard a Navy hospital ship after being shot. Meanwhile, DiNozzo and Joanna traveled to Shanghai to try and take down the Calling. Did you watch the last episode? If you missed it, we have a full and detailed recap right here for you.

On tonight’s episode as per the CBS synopsis, “NCIS assists a DEA agent on a drug-running case that keeps going cold, after Gibbs agrees to help a friend who shares a tragic past. Meanwhile, the team gossip about Gibbs’ new look after he replaces his standard military haircut and polo shirt with a modern cut and tailored dress shirt.”

Tonight’s episode looks like it is going to be great and you won’t want to miss it, so be sure to tune in for our live coverage of CBS’s NCIS at 10:00 PM EST! While you wait for our recap hit the comments and let us know how excited you are for the season 13 episode 2.

Gibbs was suddenly a changed man on tonight’s episode. And it looks like it was the shooting that finally made him let go of some of his old ways.

Apparently coming close to death can do that to a person. Though who knew Gibbs would have ever fall for it much less buy into the whole life changing moment? If anything he would have been just the man to have willing (and condescendingly) smirked at others for wanting to abruptly change their lives. And yet no could deny the facts – Gibbs was changing.

And there was a reason for that.

On this season of “NCIS”, Gibbs had realized that is was time to move on. And in his case that meant looking past more than just his recent shooting. Even if it had played a part in his new demeanor.

See, Gibbs had seen his family during surgery. Now that could have been the drugs he was on but simply envisioning them had reminded our beloved Gibbs about what he had and that neither his late wife nor dearly departed daughter would have wanted him to close himself off from rest of the world. So Gibbs set out to change and, funnily, he began this new outlook with a new wardrobe.

He got rid of the polo shirts and started to wear good old fashion button-downs. And he also got rid of the old hairstyle. So you could say he brought into the 21st century.

But on a much more serious note, Gibbs was taken some odd chances at work. A DEA agent needed some help in gaining enough evidence to finally take down a drug cartel he’s been after and for some reason Gibbs made that a NCIS job. So that didn’t really make a lot of sense. That wasn’t their field of expertise and DiNozzo for one wanted to know why his boss was taking such risks.

DiNozzo had been benched at the outset of the job and so he had an outside view of their situation. And one of the first thing he noticed was that Gibbs was going out of his way to help DEA Agent Luis Mitchell. So DiNozzo looked into Luis and surprisingly he found out Luis was the son of the late NCIS Agent Kurt Mitchell. Kurt being the agent that died trying to protect Gibbs’s family.

So right away he noticed the danger because Gibbs had, ironically enough, been the one to warn him about making things personal.

By making it personal, things get messy. And that’s not something DiNozzo wanted to happen on this case. The drug cartel they were investigating was run by Benson Long. A notorious and deangerous skilled criminal. Yet a criminal that had still managed to get away each and everytime someone attempts to looks into his dealings.

So no one could afford to make mistakes involving this man. Especially when Long is known for hiring out ex-military in order to fill in his ranks.

And so DiNozzo did what he felt he had to. He tried to get someone else take Luis’s case and that plan would have worked if Gibbs hadn’t shut it down. So DiNozzo was then stuck, He knew his boss was too close to be objective and he couldn’t keep the other man’s secret.

That’s why he told his partners. Bishop and McGee were shocked about Luis’s and Gibb’s connection. More so Bishop because she never got the full story about what happened to Gibbs’s family. So she looked into her boss’s file and she found out that Shannon and her daughter were witnesses to a murder. And then later moved to a safe house by Agent Mitchell for their protection.

Mitchell eventually died trying to protect them and the ladies died not long after him because of a nasty car crashed. But what the guys didn’t know, and that Bishop ended up informing them about, was that the man that had put out a hit was Long. Long had controlled the area at the time and it was his man that would have gotten locked up if the Gibbs women had survived long enough to testify.

So it was personal for both Gibbs and Luis. And Gibbs wasn’t merely protecting Luis, the men were in bringing down Long together.

Yet when they kept missing their opportunity, Luis almost took matters into his own hands. He went over to Long’s and he was planning on killing the man that was responsible for the death of his father. And it was only fortunate that Gibbs was there before he could make a mistake.

See, Gibbs talked Luis down and in the end they were still able to get Long because the other man just didn’t when to stop talking.

He thought because they were in his house illegally that it wouldn’t matter if he did confess to murder. Not with what he had on them anyway. And he was right. If it was only them that heard then there’s no way that two men that tried to kill him would have considered great or even good witnesses. But, luckily, McGee had planted a listening a device and got a recording of Long confessing to murder.

So Long got himself caught.

And the families he hurt finally received closure.