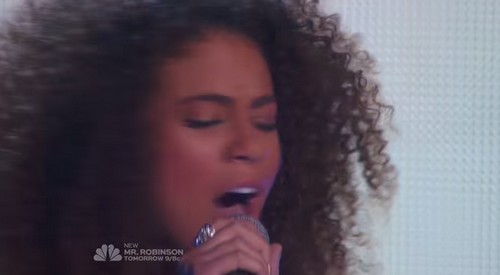 Fresh off from his divorce from Mariah Carey, Nick Cannon is moving on with Samantha Johnson. The America’s Got Talent host reportedly has set his sights on dating a former 26 year old AGT contestant, Samantha Johnson. But, here’s the kicker – Nick Cannon’s new girlfriend Samantha looks like his ex-wife Mariah Carey’s doppelganger. And, Nick is totally aware that Samantha could pass as Mariah’s twin, as a matter of fact he has been bragging about it to all of his pals.

An inside source dished to Star Magazine, “Nick obsesses over how much Samantha resembles his ex. He has gotten a kick out of comparing their smiles.” The America’s Got Talent judge was rumored to have been hooking up with Samantha while she was competing on the show, but she was voted off during the semifinals on September 1st. Nick and Samantha tried to hide their relationship, but the insider adds that they did a horrible job of doing so and everyone on set knew that they were hooking up.

So, either Nick Cannon is borderline obsessed with his ex-wife Mariah Carey – and now that here divorce is over he settled on the next best thing. Or, he is far more petty than we initially thought and he can’t wait to strut around his new girlfriend Samantha Johnson to drive Mariah mad. Carey is insecure as it is, the last thing she needs is her ex-husband hooking up with the younger and hotter version of herself. On the bright side, when Nick has and Mariah’s twins over – they shouldn’t have any problem warming up to the new lady in his life, seeing as how they might mistake her for their own mother.

Do you think it is weird that Nick Cannon is hooking up with Mariah’s doppelganger? Does he actually like her, or did he start seeing her just because she looks like his ex-wife? Let us know what you think I the comments below!